Note 9 rumors have been a bit of a free-for-all in the lead up to today’s big event. Samsung did manage, however, to do a slightly better job keeping today’s big wearable news under wraps. We’d heard a few rumors up to this point, but the details have been pretty sketchy. As rumored, the new device is, indeed, the Galaxy Watch, bucking the Gear naming convention.

On the face of it, the new device features most of the same features as the Gear, including the circular bezel, which doubles as a control — one of the primary features the line has going for it versus Apple’s offering. The Galaxy Watch also comes in two sizes, a decided improvement over early Samsung watches, which were entirely too large for many wrists.

No specifics yet on battery size, though the company says the new wearable should get “several days on a single charge,” an impressive claim, if true, and certainly one of the major pitfalls in the smartwatch world. For those times when you do need to refill, there’s that new Wireless Charging Duo, which can handle a Galaxy mobile device and watch at the same time.

Unlike previous rumors, the Galaxy Watch appears to still be running Tizen, rather than Android Wear.

Also, Samsung’s announcement confirms that the Watch will still be running Tizen. 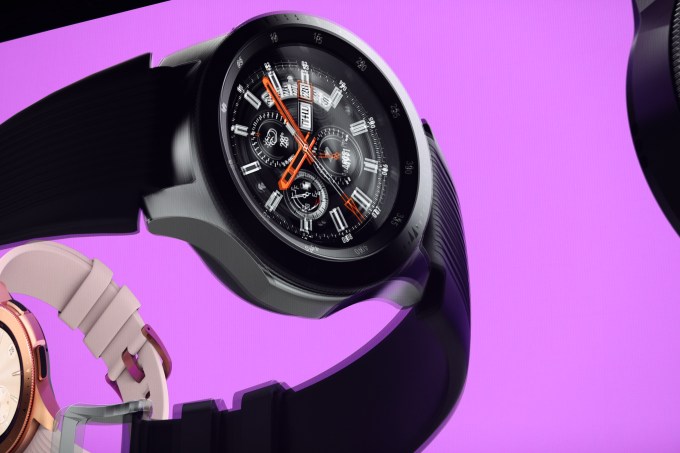