Everything you thought you knew about the Galaxy Note 9… well, it’s pretty spot on, honestly.

Between the images, promo videos, teasers and that image of Samsung CEO DJ Koh using the damn phone out in public, it’s hard to shake the feeling that the company simply embraced the leaks in hopes of generating a little extra excitement ahead of launch during these (excruciatingly hot) dog days of summer.

As expected, little has changed aesthetically this time out — and that’s just fine. There are a couple of new colors, a shifted fingerprint sensor and a screen that’s larger by a fraction of an inch, which is perhaps why the aforementioned C-level executive thought he’d be able to go unnoticed. That’s all perfectly fine, of course — it’s probably too much to expect some radical design departure with each subsequent generation by the time you’re on number nine or so.

Really, like the S9 before it, the new Note isn’t a radical departure in any respect. The latest version of the industry-defining phablet is more focused on the fundamentals. It’s honestly a welcome change from a company like Samsung that often feels entirely focused on the bells and whistles. More storage, a better camera, an improved S-Pen and a considerably larger battery are all on-board this time out.

Which isn’t to say there aren’t any new whistles or bells, of course. This is Samsung, of course.

In a briefing, Samsung referred to the Note line as “our innovation brand,” a nod to the fact that it’s regularly been the first device to receive many now standard Galaxy features — see: the Edge display (curving screen), S-Pen, giant screen, dual-camera. If there’s one new feature that stands out, however, it’s actually that larger battery, which now measures 4,000mAh hours — that’s a 700mAh jump over its predecessor.

That’s great news, of course. Samsung doesn’t have any official hour estimates to share at the moment, and is instead still calling it an “all day” battery — though the vast majority of users should be able to squeeze out more than that with standard usage. The real significance of all of this likely won’t be lost on anyone who’s been paying even the slightest bit of attention to the mobile industry over the past couple of years.

The Note 9 marks the first significant battery capacity increase since the Note 7’s exploding lithium-ion led to two separate recalls for the company. Naturally, Samsung’s on the offensive about this one, noting the eight-point safety check the company instituted when the literal and figurative smoke cleared with the Note 7. The company subjected the phone to external scrutiny from UL.

“What we want to do is a tempered approach to innovation any time,” Samsung’s director of Product Strategy and Marketing told TechCrunch, “so this was the right time to increase the battery to meet consumer needs.” 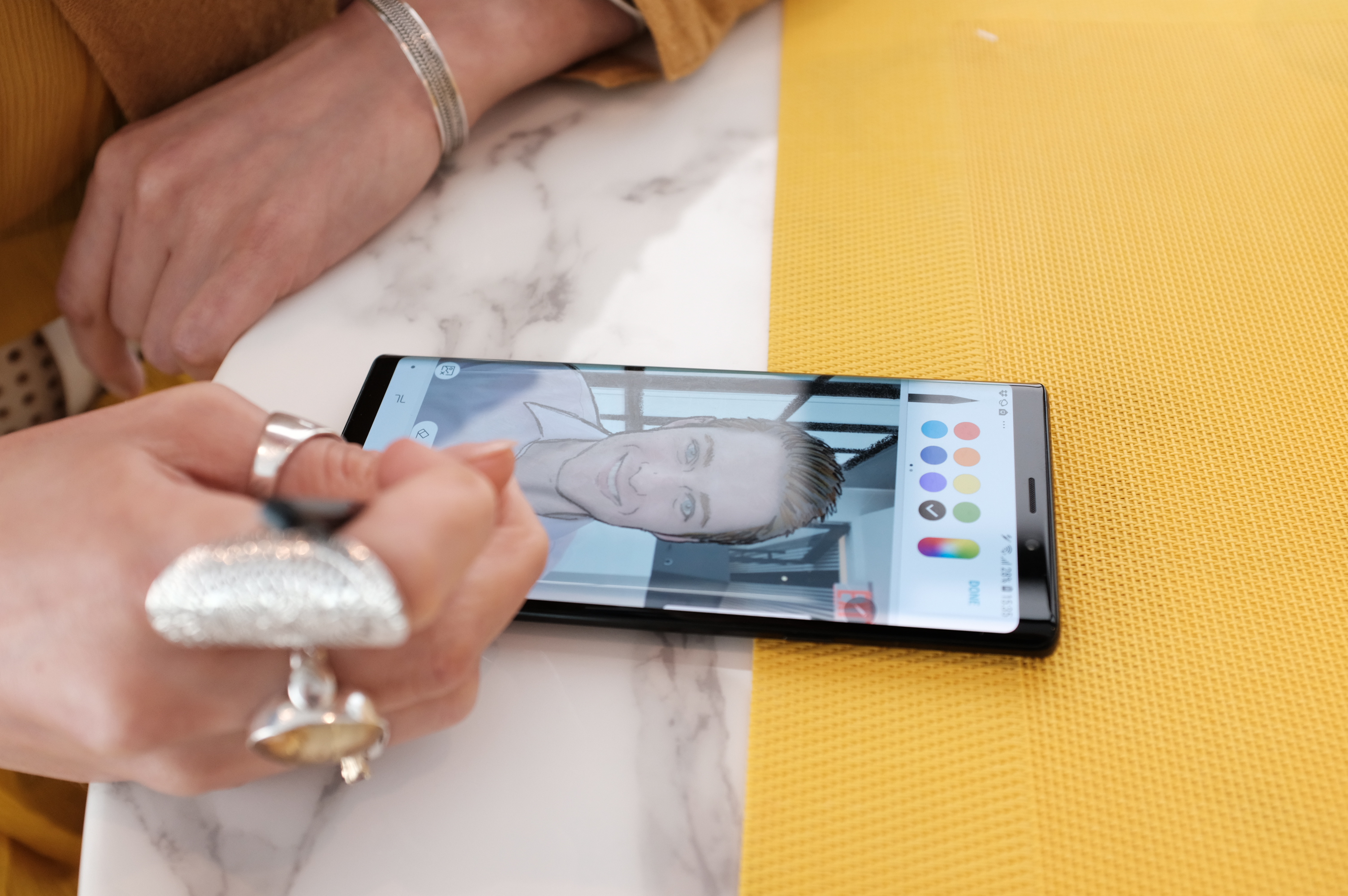 Of course, the company had to consider both the pragmatic concerns over battery combustion, along with the optics of rushing too quickly to push the bounds of capacity. There was, after all, a general notion that the company had flown too close to the sun on this one. As such, battery life has stagnated on the last several Galaxy phones.

As the initial invites for today’s event suggested, the S-Pen also gets a lot of love this time out, featuring the most significant upgrades since the stylus was announced all the way back in 2011. The most obvious difference: the striking new colors. The image on the invite was, indeed, a closeup of a neon yellow stylus. There’s a purple one, too — each writing on the off-screen memos in a color that matches their design.

The real differentiator here, however, is the inclusion of Bluetooth low energy inside the S-Pen, which allows it to function as a remote. That, of course, requires a battery, so the stylus now includes a super capacitor so it charges when it’s in the slot. Samsung says it should get around 30 minutes of standby time with 40 seconds of charging. Mileage will vary, of course, but given the fact that it will effectively be charging whenever it’s not in use, that shouldn’t be an issue. 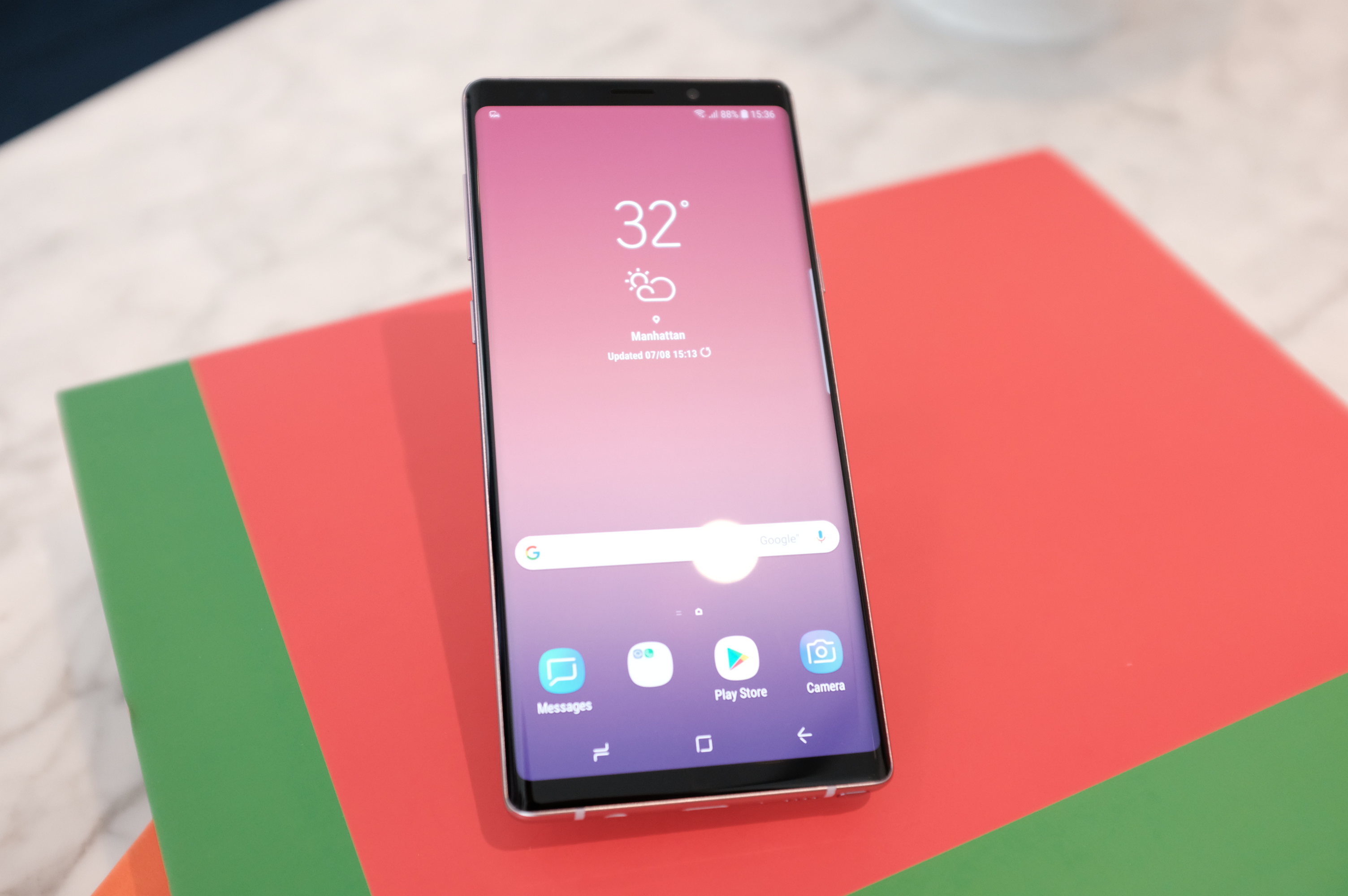 The new S-Pen can be used to control things like the camera, slideshows and music playback. In Spotify and Google Music, one click of the button does Play/Pause and two clicks advance the trick. There’s no back, but there’s really only so much one can do with a single button. In photo mode, it can be used as a shutter, with a double-click flipping the camera around for a selfie.

The functionality will only be available for a select number of apps at launch, but the company’s going to be opening up the SDK for developers. There also will be some level of customization available in the settings, so users can designate different functions.

Here’s what you’re working with as far as camera hardware: 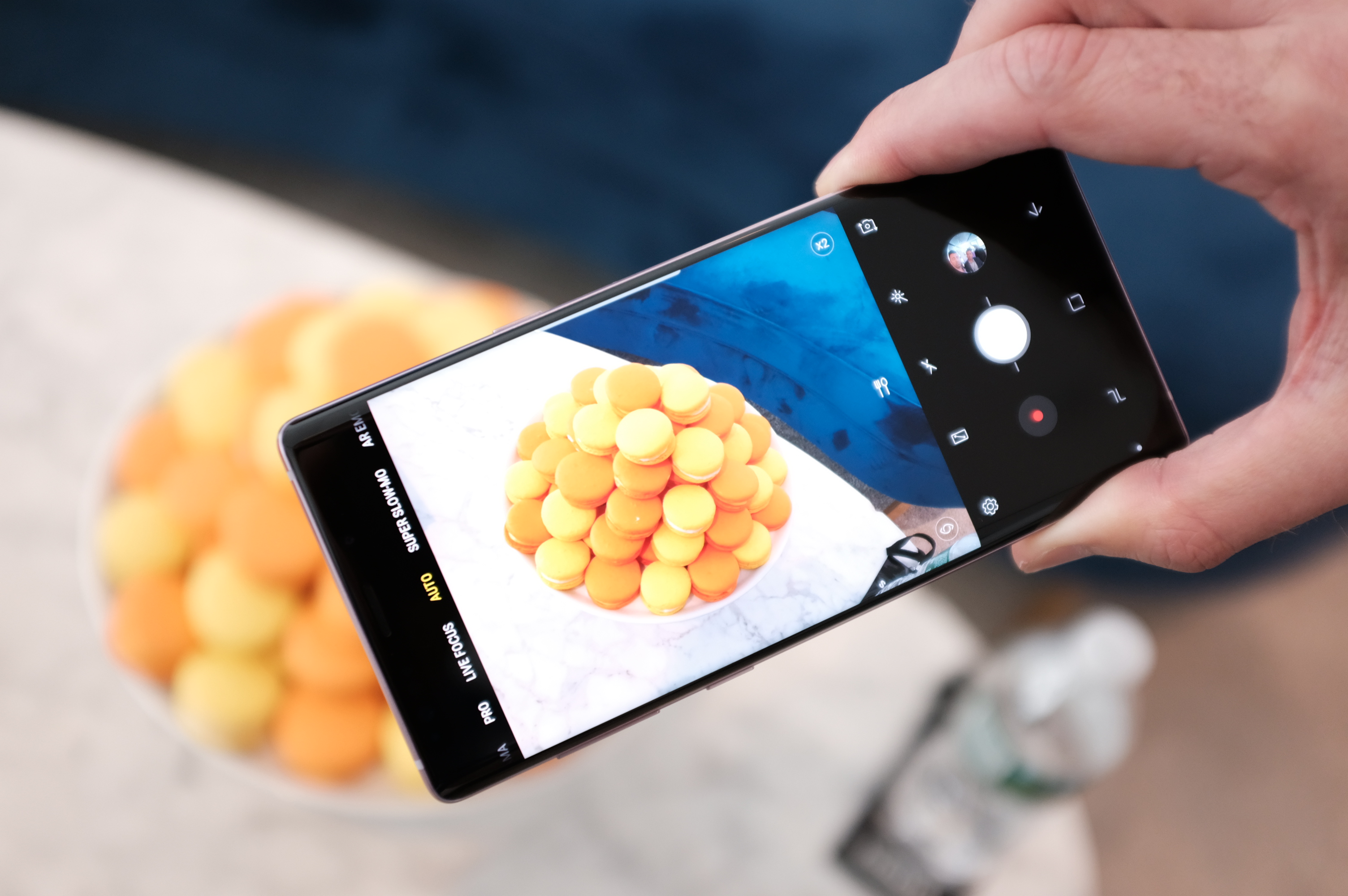 The biggest change on the imaging side is software, however. Scene Optimizer is similar to technologies we’ve seen on recent flagships from companies like HTC. The system uses an on-board AI process (no cloud connection required) to determine what you’re taking a photo of. There are 20 categories, all told, including Night, Snow, Street Scene, Birds, Indoors, Text, Food, Pets, Flowers and Sunset. Once the system has decided what it’s shooting, it adjusts the white balance, color and saturation accordingly.

I was only able to try it on a limited number of objects during a brief hands-on, but it worked well with things like flowers and a plate of food, really highlighting colors in the process. You can’t actually manually override the system to choose one of the aforementioned 20 scenes, but if you’re getting a false positive, you can just shut the thing off.

Even more compelling is Flaw Detection, which points out when you’ve messed up. The system will notify you if a shot is blurry, if there’s a smudge on the screen, if the subject blinked or if backlighting is making everything look crappy. 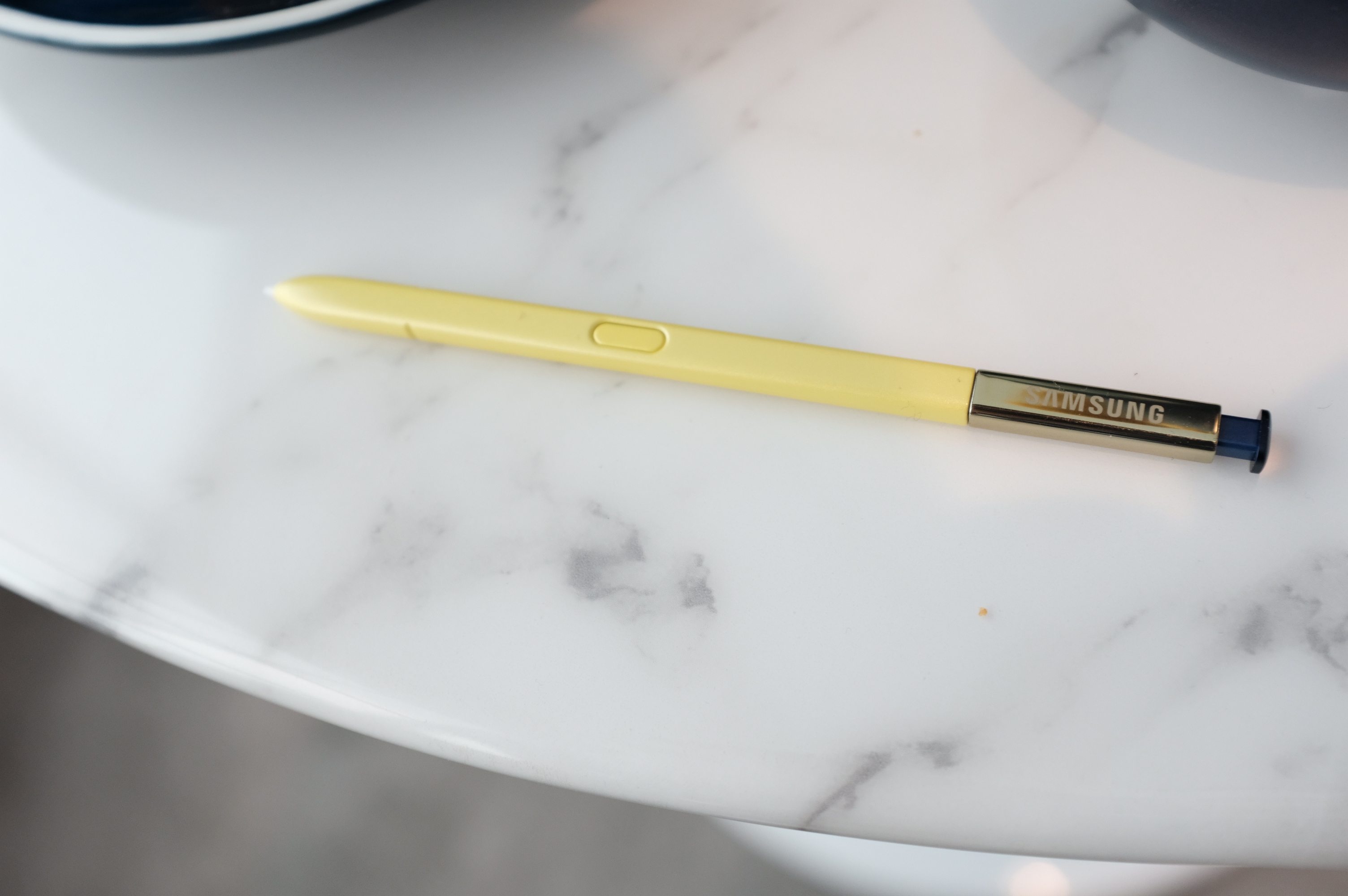 Oh, and then there’s storage. The Note 9 comes with beefy 128GB, standard. If you really want to go all-in, there’s also a 512GB version, which, as Samsung notes, makes the device “1TB ready,” when you factor in the expandable 512GB microSD that exists for the the price of a mid-tier smartphone (PNY’s is $350 right now). Oh, and speaking of money. 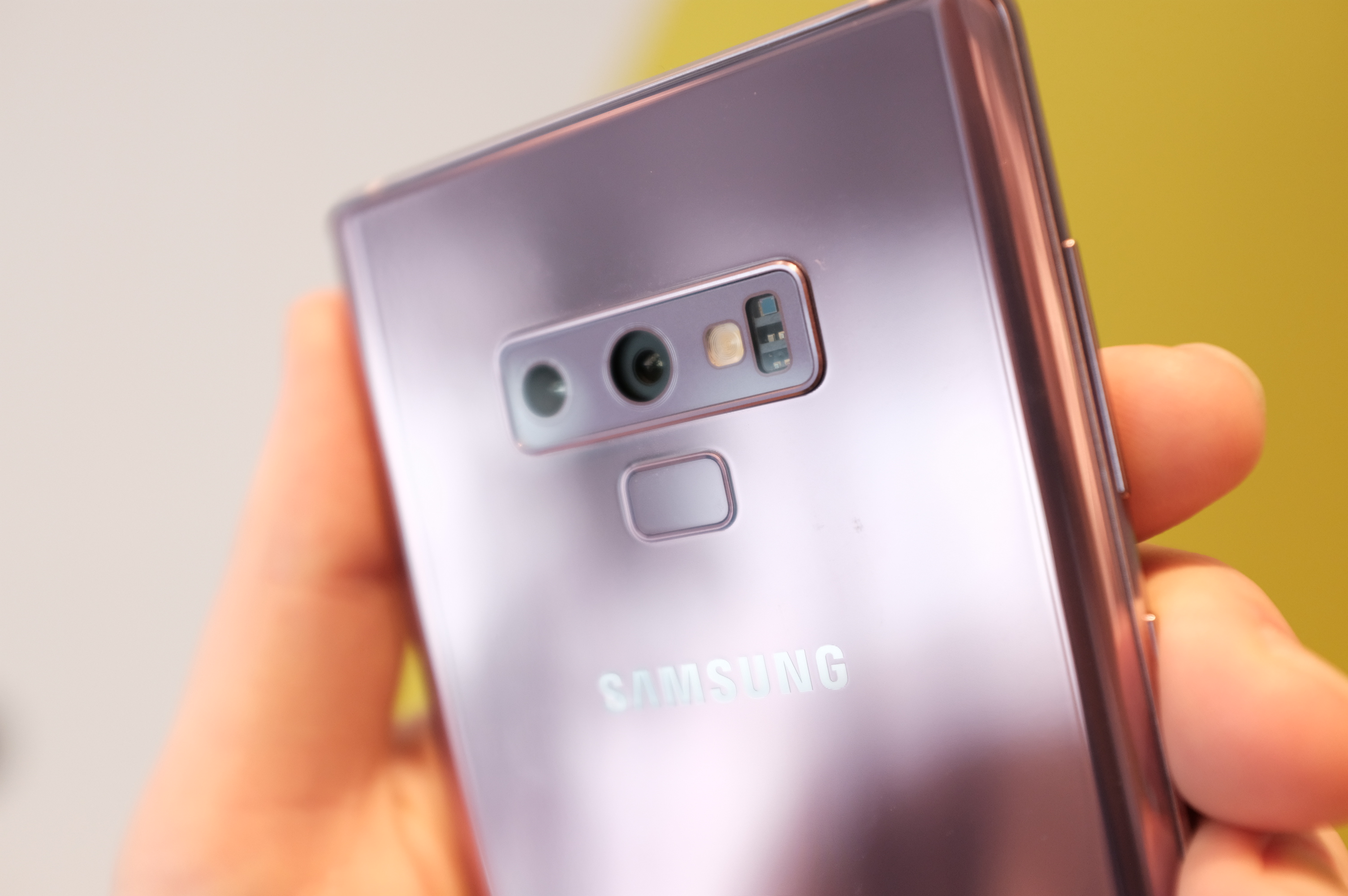 Samsung had suggested early on that it was going to attempt to rein in the cost on this one. Maybe next generation. The 128GB model runs $999.99. The 512GB version will set you back $1,249.99. Both are available starting August 24, with pre-order starting August 10. The latter will be limited to “select retail locations and carrier sites, including AT&T, T-Mobile, Verizon and U.S. Cellular.

The Note 9 comes in Ocean Blue and Lavender Purple, which ship with a purple and yellow stylus, respectively. And yes, there’s a headphone jack.