Facebook — under fire for the role it has played in helping spread misinformation through its social media platform — has been turning its attention to more positive applications of its tools, such as strengthening communities, fundraising for good causes, and maybe even finding The One. Today comes the latest in that list: the company today announced the official launch of Mentorships, a free service that will pair people who need help or guidance with those who can provide it.

Mentorships will start first with a focus on mentoring opportunities within specific Groups. This is a sizeable opportunity in itself, with collectively about 200 million Group members across the social network. Facebook’s product manager for Groups, Gabriel Cohen, said Facebook will be extending the feature to a smaller selection of Groups before inviting participants more widely.

Users of the mentoring feature have to be at least 18 years of age.

When we first spotted Facebook testing Mentorships nearly a year ago, we’d guessed it would be a service focused on career advancement, coming as it did so soon after Facebook made a move into job listings and LinkedIn launching its own mentoring features. As it turned out, an early pilot of the service was announced during Facebook’s Social Good Forum, where the initial users were iMentor, a mentoring group focused on first-generation college students, and the International Rescue Committee.

It’s the latter social good angle — helping provide guidance to people in need or for educational purposes rather than straight career coaching — that Facebook is going to focus on initially as the Mentorship service proceeds into a more widely available format.

Early users of the mentorship feature include Mama Dragons, a group focused on providing support to Mormon parents of LGBTQIA children; and a group focused on learning how to make soap. (Yes, soap.) Mentorship product manager Gabriel Cohen said that the kind of help that mentors will be providing will vary widely, from helping new Group members “learn the ropes” in the Group, through to providing more direct support and guidance in whatever the specific area might be.

For now, there is no element of payment involved in the service. “People are doing this out of a spirit of volunteering,” Cohen said in an interview.

Interestingly, in this first iteration, Facebook is banking the administration and running of mentorships not only around specific Groups, but Group administrators. That is to say, it’s up to Group admins to decide whether they would like to enable mentorships within their communities, and then it’s also up to them to pair people together, and make the introductions. Thereafter, they can communicate through a guided program set up by Facebook — which provides some guidance on how to proceed and check in with each other — or directly through Messenger. In both cases, conversations are completely private between the mentor and mentee. 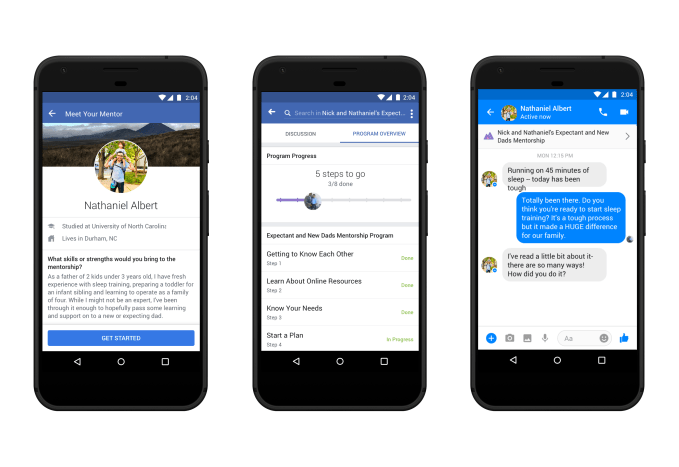 Cohen said that in its early conversations with those trying out the Mentorship feature that so far, admins seem to be okay with doing the heavy lifting, although there has been some feed back that points to Facebook over time providing more tools to help things along, whether it be in providing some recommendations on pairings or simply helping connect users in a more automated way.

“We are relying on them to make these matches, but I think there are opportunities to simplify the effort they need to make,” he said. “It takes a lot of work to maintain a community well and we don’t want to burden them more.”

But you can see why Facebook is taking this more manual route, at least at first: the company has been treading a fine line when it comes to how it uses algorithms to curate and facilitate communication on its platform. Some of that has not worked in its favor when it comes to other areas like news, and the company has made a deep swing to bringing in more people into the mix to set things aright. Introducing algorithms now could be a misstep that’s not worth it to make, especially since the ethos is supposed to be about connecting people directly.

Over time, Cohen said that the idea will be to expand Mentorships to more areas — essentially as many as there are Groups on the platform. These could cover not just parenting and soap-making, but fitness, support groups of survivors of violence or other disasters, and more.

And yes, he didn’t rule out having mentors appear alongside Facebook’s efforts in job listings, too.

“If we are looking for job searches outside of our the immediate networks, mentors can really help,” he said. “We do want to take advantage of this in the future. Jobs seems like a logical place to have this.”