Facebook is shutting down Friend List Feeds sometime today, according to a message posted in the Facebook app. The feature allowed users to scroll through only those posts from one of their designated friend lists — for example, family, work colleagues, neighbors, industry peers and so on. The end result was a much more personalized version of Facebook — one where you could catch up on the updates that were important to you, without the clutter from Facebook Pages, posts from acquaintances or those from friends whose updates you didn’t care to follow for any other reason.

To use Friend List Feeds, you would first have to create a friend list in Facebook. And to be clear — those friend lists are not going away.

So if you still want to brag about your professional successes to your industry colleagues or post baby pictures for your family to see, that will still be possible.

Facebook’s note regarding the feeds’ shutdown says “don’t worry — you can still continue to create, edit and share to your friend lists.” What’s winding down are the Friend List Feeds, which is a way to read these specific people’s updates in their own separate News Feed within the Facebook app. 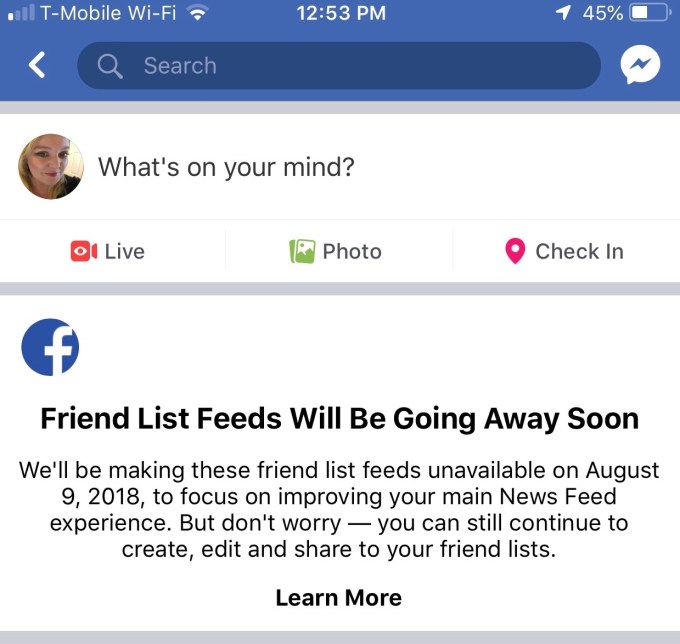 To access this feature, there’s a section called “Feeds” in the Facebook app that would list all the feeds available to you, based on your friend lists.

Friend lists have been around on Facebook for a number of years, but the original version required a lot of manual labor. You’d first have to create a list, title it, then go through all your friends one-by-one to determine who to add. And of course, as you added new Facebook friends, you’d have to remember to add them to the appropriate list, too.

Few adopted this feature — in fact, Facebook said in 2011 that 95 percent of Facebook users hadn’t made a single list. To make things simpler, Facebook launched “smart lists,”, where it began auto-grouping your friends into lists for you to save you the effort. Facebook focused on making smart lists where it could identify some common factor based on profile data — like people who went to school with you, people you work with, people who live within 50 miles of you, and other things.

That way, you could use the lists for selective sharing and to browse their feeds, without having to do the work of list-building yourself.

But even with Smart Lists, it seems that not many people likely used the “Friend List Feeds” feature, specifically — or perhaps, even knew it existed.

In addition, with the rise of Facebook Groups, those who want to share and browse posts focused on a given topic — like neighborhood news, discussions about a favorite show, people going through a similar health crisis, or anything else — could just join a private group instead.

According to Facebook’s message, Friend List Feed are shutting down on August 9, 2018 — which is today. However, the feature is still available as of the time of writing. (Facebook said this could be due to an older app version.)

The company confirmed the shutdown to TechCrunch.

“We’re shutting down this lesser-used feature to focus our efforts on improving the main News Feed experience,” a spokesperson said. “While people won’t be able to view custom feeds from lists of friends, they’ll still be able to create and edit friends lists, and share just to these audiences whenever they post to Facebook. In addition to these options, they can also keep customizing News Feed by visiting News Feed preferences to choose which posts they want to see first, or hide posts they don’t want to see.”