Back when Dennis Woodside joined Dropbox as its chief operating officer more than four years ago, the company was trying to justify the $10 billion valuation it had hit in its rapid rise as a Web 2.0 darling. Now, Dropbox is a public company with a nearly $14 billion valuation, and it once again showed Wall Street that it’s able to beat expectations with a now more robust enterprise business alongside its consumer roots.

Dropbox’s second quarter results came in ahead of Wall Street’s expectations on both the earnings and revenue front. The company also announced that Dennis Woodside will be leaving the company. Woodside joined at a time when Dropbox was starting to figure out its enterprise business, which it was able to grow and transform into a strong case for Wall Street that it could finally be a successful publicly traded company. The IPO was indeed successful, with the company’s shares soaring more than 40 percent in its debut, so it makes sense that Woodside has essentially accomplished his job by getting it into a business ready for Wall Street.

“I think as a team we accomplished a ton over the last four and a half years,” Woodside said in an interview. “When I joined they were a couple hundred million in revenue and a little under 500 people. [CEO] Drew [Houston] and Arash [Ferdowsi] have built a great business, since then we’ve scaled globally. Close to half our revenue is outside the U.S., we have well over 300,000 teams for our Dropbox business product, which was nascent there. These are accomplishments of the team, and I’m pretty proud.”

The stock initially exploded in extended trading by rising more than 7 percent, though even prior to the market close and the company reporting its earnings, the stock had risen as much as 10 percent. But following that spike, Dropbox shares are now down around 5 percent. Dropbox is one of a number of SaaS companies that have gone public in recent months, including DocuSign, that have seen considerable success. While Dropbox has managed to make its case with a strong enterprise business, the company was born with consumer roots and has tried to carry over that simplicity with the enterprise products it rolls out, like its collaboration tool Dropbox Paper.

Here’s a quick rundown of the numbers: 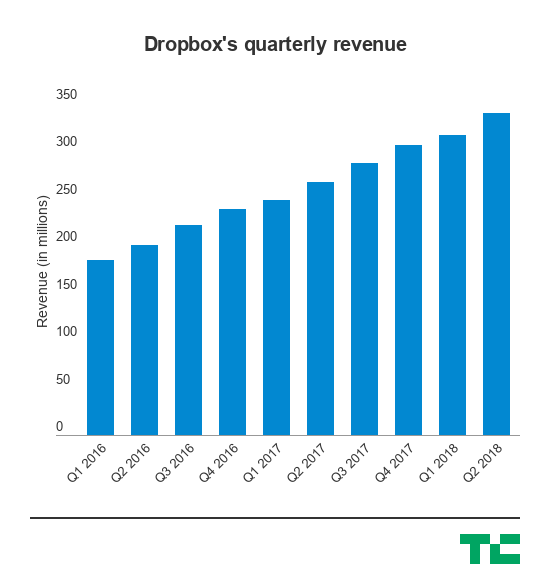 So, not only is Dropbox able to show that it can continue to grow that revenue, the actual value of its users is also going up. That’s important, because Dropbox has to show that it can continue to acquire higher-value customers — meaning it’s gradually moving up the Fortune 100 chain and getting larger and more established companies on board that can offer it bigger and bigger contracts. It also gives it the room to make larger strategic moves, like migrating onto its own architecture late last year, which, in the long run could turn out to drastically improve the margins on its business.

“We did talk earlier in the quarter about our investment over the last couple years in SMR technology, an innovative storage technology that allows us to optimize cost and performance,” Woodside said. “We continue to innovate ways that allow us to drive better performance, and that drives better economics.”

The company is still looking to make significant moves in the form of new hires, including recently announcing that it has a new VP of product and VP of product marketing, Adam Nash and Naman Khan, respectively. Dropbox’s new team under CEO Drew Houston are tasked with continuing the company’s path to cracking into larger enterprises, which can give it a much more predictable and robust business alongside the average consumers that pay to host their files online and access them from pretty much anywhere.

In addition, there are a couple executive changes as Woodside transitions out. Yamini Rangan, currently VP of Business Strategy & Operations, will become Chief Customer Officer reporting to Houston, and comms VP Lin-Hua Wu will also report to Houston.

Dropbox had its first quarterly earnings check-in and slid past the expectations that Wall Street had, though its GAAP gross margin slipped a little bit and may have offered a slight negative signal for the company. But since then, Dropbox’s stock hasn’t had any major missteps, giving it more credibility on the public markets — and more resources to attract and retain talent with compensation packages linked to that stock.

“Our retention has been quite strong,” Woodside said. “We see strong retention characteristics across the customer set we have, whether it’s large or small. Obviously larger companies have more opportunity to expand over time, so our expansion metrics are quite strong in customers of over several hundred employees. But even among small businesses, Dropbox is the kind of product that has gravity. Once you start using it and start sharing it, it becomes a place where your business is small or large is managing all its content, it tends to be a sticky experience.”