IDC’s latest tablet numbers tell a familiar story. Shipments are down yet again, a trend that shows no sign of abating. There is, however, one clear bright spot in all of this, bucking the trend.

Quarter after quarter, convertibles have continued to grow, as users have demanded more productivity than is traditionally possible with slates. It’s no surprise, then, that Apple, Microsoft, Google and Samsung are all vying for mindshare. The convertible segment may still be small, but at least it’s moving in the right direction.

Samsung’s shifted approaches a number of times over the years. Say what you will about the company’s approach to devices, but at least the company’s everything-and-the-kitchen-sink model has allowed them to stay limber for such a hulking hardware behemoth. The Galaxy Tab S4 simultaneously finds the company building on existing technology, while attempting to reinvent the wheel in the process.

The Tab S4 isn’t a radical departure from its predecessor, save for one key thing: DeX. The brand, which previously referred to smartphone docking stations for Galaxy handsets, is now the name of the custom desktop version of Android Samsung built. The change clearly hasn’t fully taken, however — Samsung’s official DeX site has yet to reflect the move as of this writing. But, then, the company’s clearly been busy these past few weeks.

Porting it over to the tablet means the company can offer a device that’s capable of doing double duty as both a standard slate tablet and a makeshift laptop. It’s also a roundabout of way of not relying on Windows 10 on the Galaxy line. After all, the ability to switch modes has long been the operating system’s raison d’être, so this really feels like a thumb in the eye of Microsoft. Given the recent well-received launch of the Surface Go, however, I suspect the company’s not really sweating the slight.

I didn’t get a great justification from Samsung as to the motivation behind the move ahead of launch. I suspect the whole thing boils down to control — something you’re afforded a lot more of when you work with Android vs. Windows. There’s also the fact that Windows 10 doesn’t have nearly the selection of apps you get with Android — definitely a major factor if you’re working with the more locked down/tablet-friendly 10 S. 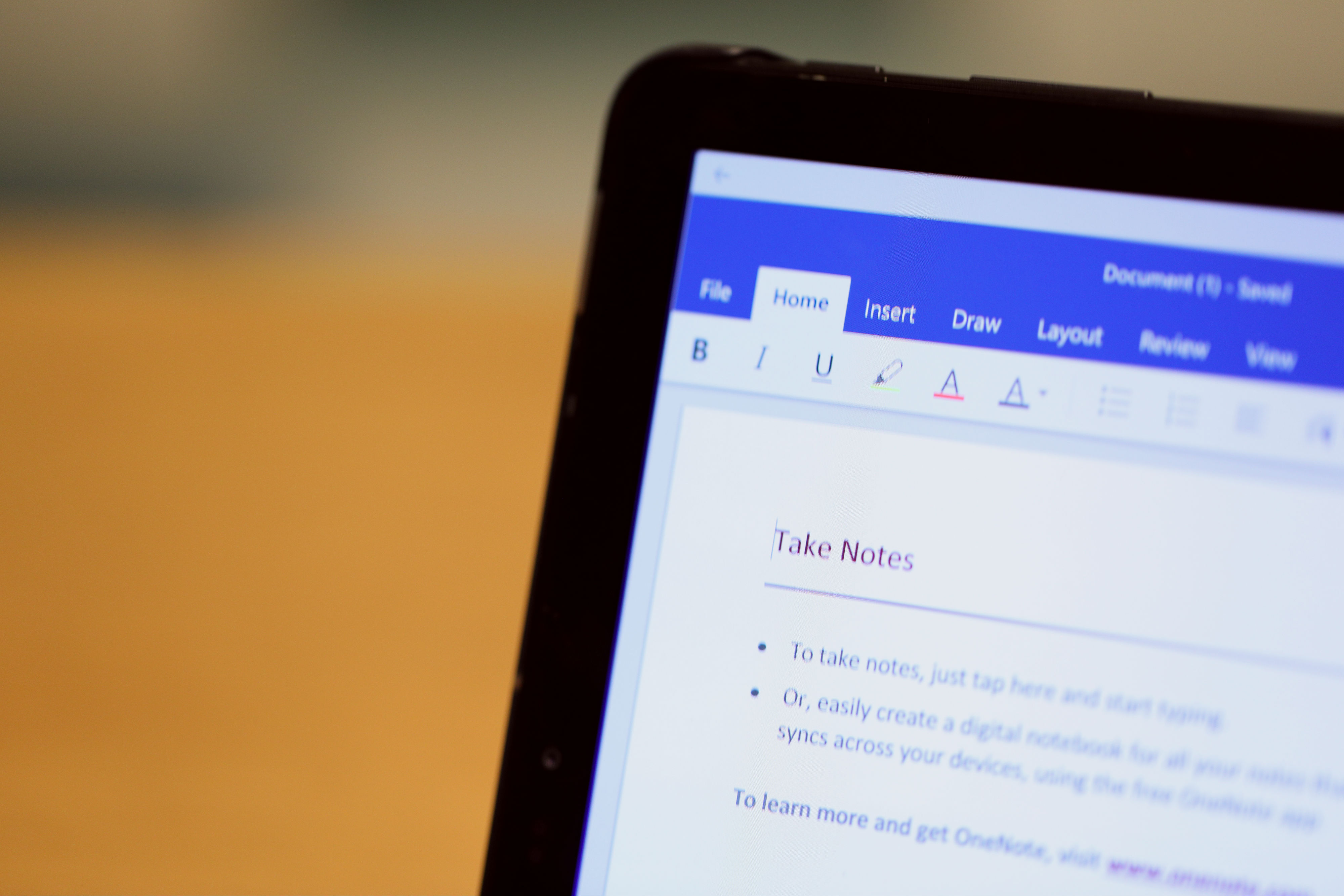 The result is something of a mixed bag. I will say that the DeX layout looks better on the 10.5-inch display, rather than the big, curved DeX docking monitor, where the Android icons feel entirely out of place.

For the most part, the DeX version of Android operates the same as the standard tablet version, allbeit with smaller icons. The desktop features three by default: My Files, Gallery and Settings. With the latter, you can adjust the DeX settings, so the OS automatically switches to the mode when you plug the tablet into the keyboard dock (though not the other way around, oddly).

I’d prefer it if the DeX settings were more easily accessible in the drop down menu, but one gets the impression that Samsung’s still working out some of the kinks on this one. Also, while it’s possible to get it to auto switch, the tablet screen always switches off when removed from the dock. A slight nuisance, but not the end of the world.

The biggest nuisance is, predictably, the same issue you run into on ChromeOS ever since Google allowed Play Store access. There simply aren’t that many apps optimized for the mode. You can access them through the Apps for Samsung Desk header located in the familiar Android apps menu. The company didn’t disclose the number of compatible apps for good reason. There are like 16. On the upside, the company teamed with Microsoft for Word/PowerPoint/Excel — all important inclusions when you’re pushing productivity on your shiny new device.

There are some other big names here, like Amazon WorksSpaces and The New York Times. There’s also Deezer, which seems to be eager to get on any operating system that will have them, bless their hearts. There’s also TripAdvisor and Craigslist, neither of which I would honestly put on my list of must-need desktop apps.

The main issue with the unoptimized apps is scalability — and the fact that they’re not designed to work well with the mouse input (which is, admittedly, optional). They do run, but opening them to full screen size requires restarting the app every time. One assumes, however, that more companies will get on board if the new Tab proves a hit for the company.

I’m not really convinced that DeX was the right choice over Android here, but at the very least, it gives the company room to grow on that side of things. It also offers an important differentiator over the iPad Pro, which has introduced some desktop-like functionality, but still relies on standard iOS. Apple’s been wary to blur the lines between desktop and laptop too much, relinquishing the upper hand to Samsung here. 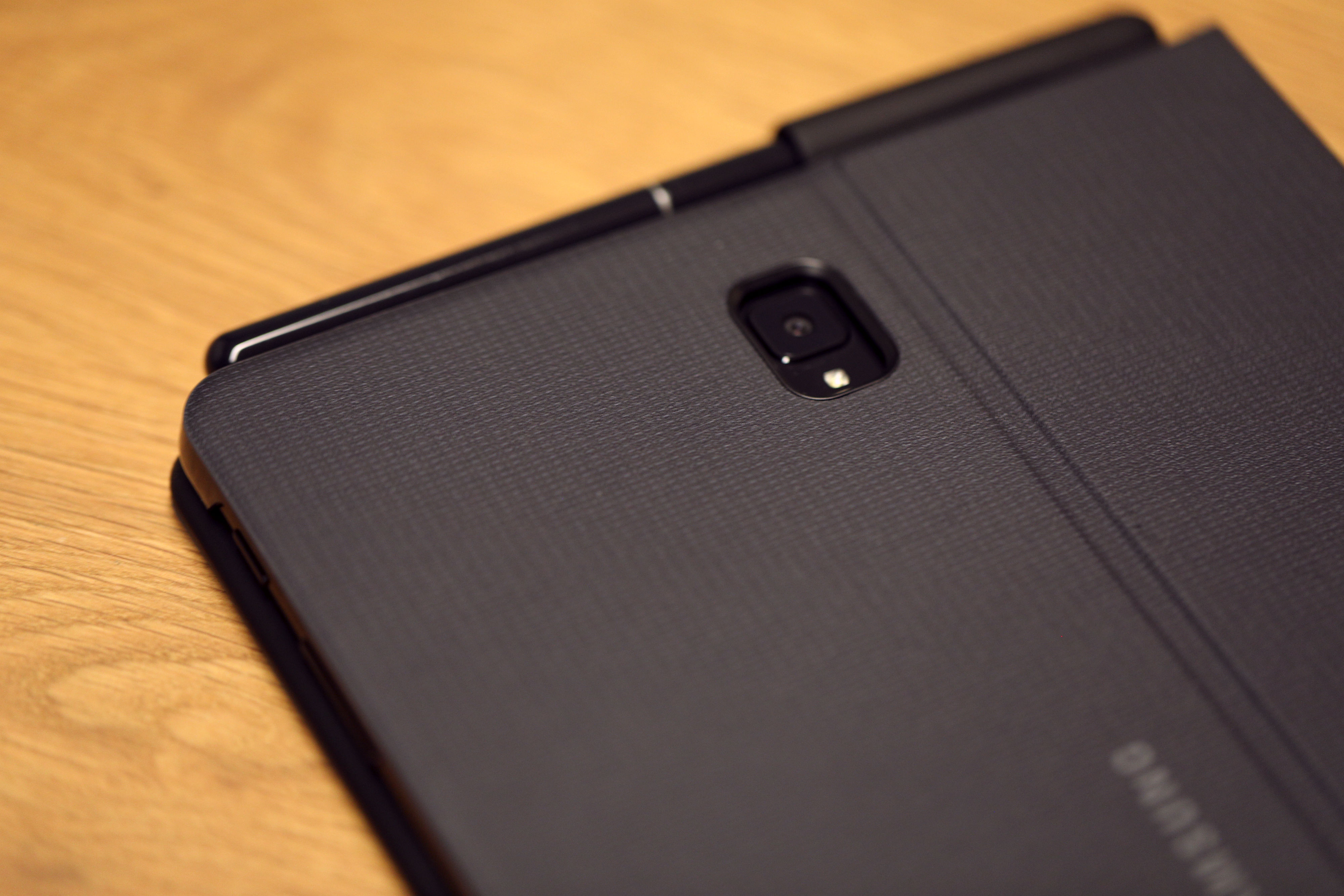 Here’s a bit of a shocking admission: I actually kind of like the keyboard case. I didn’t expect to. I don’t really ever like keyboard cases. They’re one of the bigger barriers between me and the possibility of ever taking convertibles too seriously as a potential laptop replacement. The keys on the S4 are plasticky, sure, but I prefer them to the standard keyboard case found on products like the Surface Go, which basically feels like typing on felt.

That said, there’s really no getting around how cramped the keyboard is, when designed for a 10-inch tablet. I considered pulling the Tab out for meetings multiple times this week, but ultimately thought better of it. I’m sure I’d be able to ramp up my speed given enough time with the system, but it ultimately wasn’t worth the potential of missing some important points, as my fingers struggled to keep up. 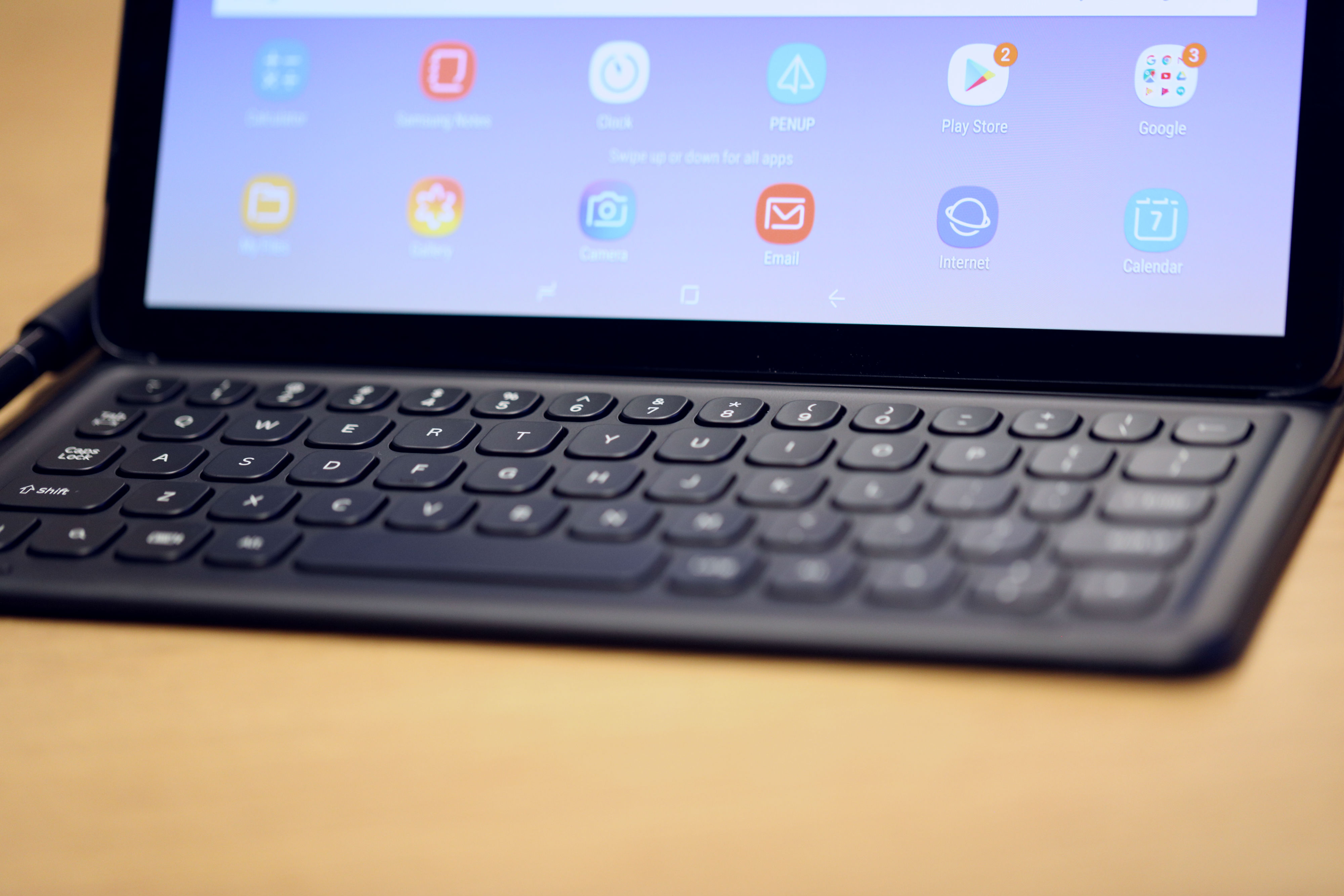 The lack of a trackpad feels like a glaring omission. Granted, it’s not exactly standard on keyboard cases these days, but Microsoft certainly demonstrated that it’s possible on a small scale with the Surface Go. And given the prominence of desktop mode here, one expects to be using the cursor as much as touch here. You can always use the S-Pen or buy a bluetooth mouse, but it seems a shame to have to add that cost on top of the keyboard case’s $149 asking price.

Bonus points, however, for including an S-Pen slot in the keyboard case for those of us who would lose our heads if they weren’t attached. The magnetic Microsoft pen that sticks to the side of the Surface is still the one to beat, but the holster does the trick, too.

All work, no play? 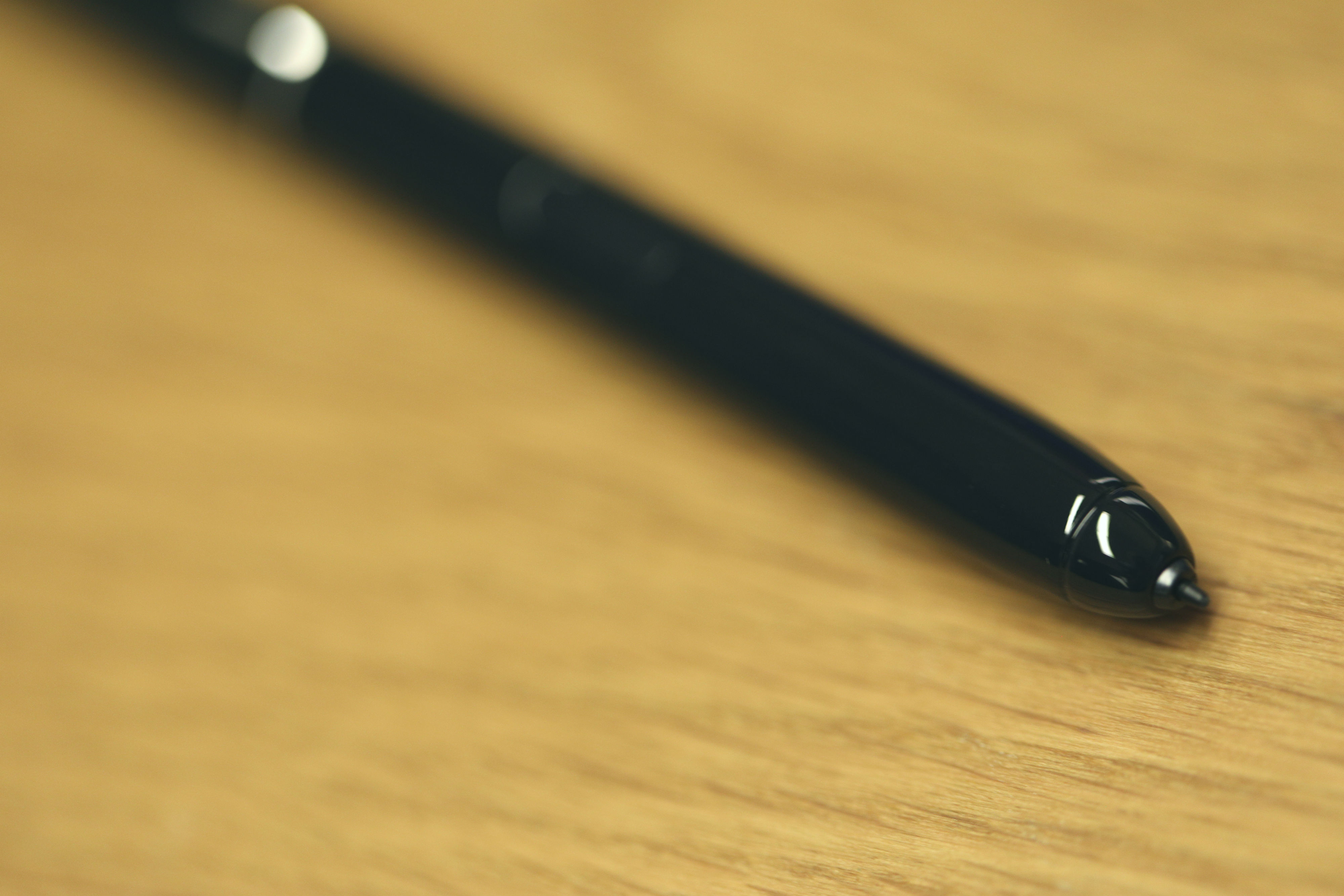 I remain skeptical as ever that convertibles will serve as a sufficient replacement for both laptop and tablet. I’m certainly not in a rush to put my MacBook out to pasture. That said, the devices provide a nice supplemental function for those who don’t want to port their heavier PCs around.

The $649 Tab S4 certainly has solid specs, with 4GB of RAM and up to 256GB of storage (augmented via microSD). The 7,300mAh battery can’t compete with the iPad Pro’s 8,134, but it should get you through a day’s use, no problem. The screen is solid for movie playback, and ditto for those AKG-tuned speakers.

I liked the keyboard more than I thought I would, as well, though it’s a bit cramped and using a keyboard without a trackpad feels like relying on a phantom limb. The DeX desktop, meanwhile, is an interesting addition to the tightening convertible tablet race, though it’s got a ways to go before it feels as fully fleshed out Windows 10.