The Surface Go is an odd thing. Not because of the device itself, so much as how Microsoft ultimately arrived at it. The tablet was reverse-engineered, the low-end addition to the premium Surface line.

What the company ultimately arrived at was the closest thing it’s offered to an iPad/iPad Pro competitor, to date. For its part, however, Microsoft is positioning the product as a portable, low-cost alternative to its other Surface devices.

It’s a bit of branding confusion, to be sure, but that’s never stopped Microsoft before. That’s basically the Surface line in a nutshell. The company has the resources and infrastructure to throw stuff against the wall to see what sticks — and for the most part, that’s worked well with the Surface line, which has effectively transformed from proof of concept into the Windows flagship line.

In a lot of ways, the Surface Go is a strange sort of in-between device. The form factor is essentially that of the Surface Pro, shrunk down to 10 inches, with rounded corners. The smaller footprint comes with some sacrifices, of course, including the dual-core Intel Pentium Gold 4415Y, which is a notable downgrade from the Intel Core m3/i5/i7 found on the Surface Pro. The battery, rated at nine hours, is smaller than the one you’ll find on the iPad Pro. 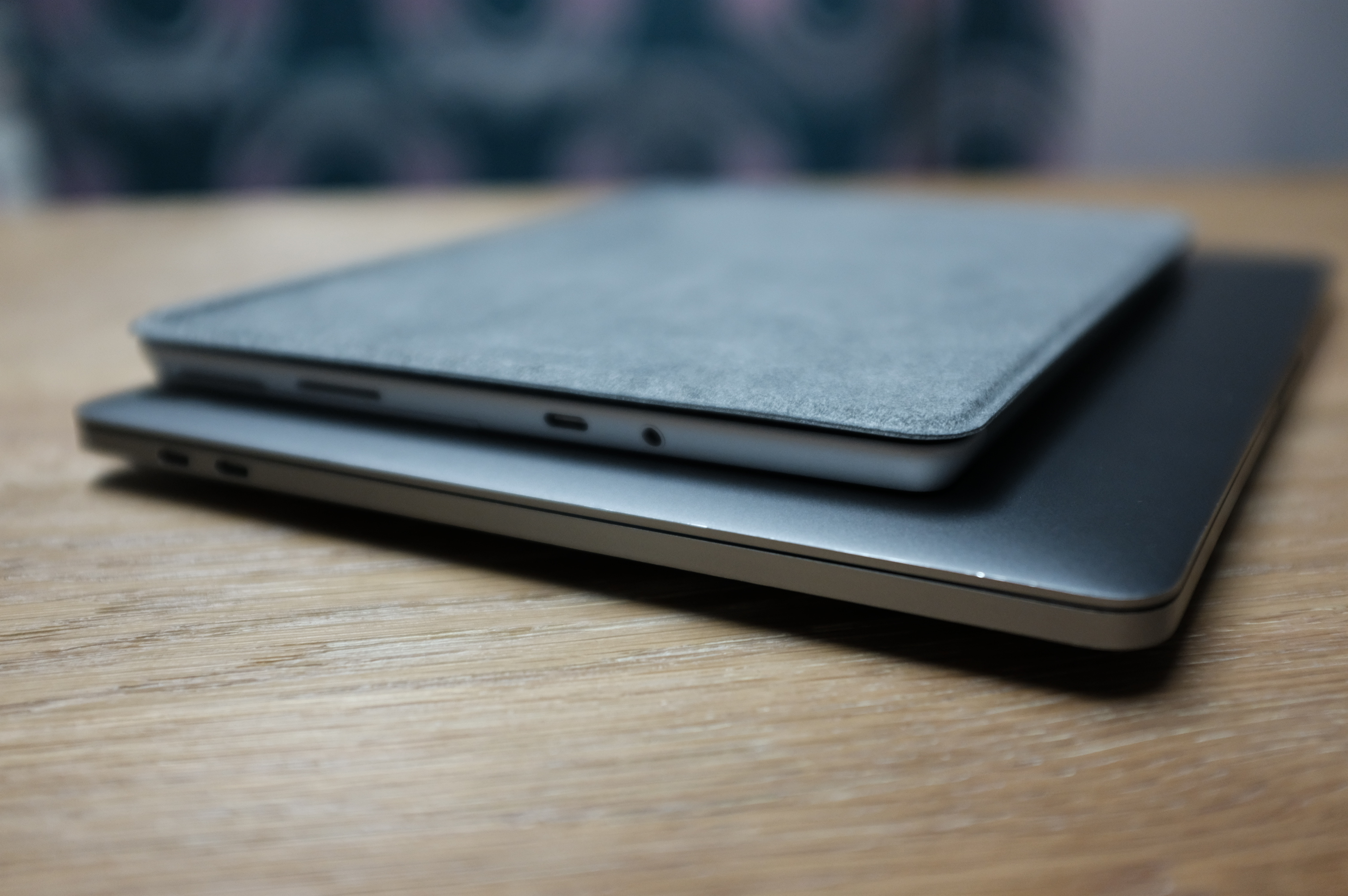 The port situation more closely mirrors what you’ll find on a tablet, versus a full-fledge computer, with a single USB-C, a headphone jack and the proprietary Surface Connect port. That latter bit seems like an odd choice, given the limited real estate here (not to mention the fact that you can charge via USB-C), but Microsoft’s clearly as interested in keeping existing Surface owners on board here as it is converting new ones. Part of that means making sure the system is backward-compatible with old accessories, for the multiple Surface-owning power users out there.

The keyboard is an additional $99 on top of the $400 asking price. Pretty standard with this sort of device, really. It’s a sort of Sophie’s Choice for manufacturers when building these kinds of convertibles — go the full swiveling keyboard, à la the Pixelbook, or add it as an accessory.

The latter decision is better for those devices primarily intended to be used in slate mode, but ultimately keyboard cases just aren’t going to provide the same manner of typing experience as a devoted keyboard. The Surface line has long offered one of the best keyboard cases around, but it’s just not a proper replacement if you plan on using the product primarily as a word processing device. That said, it still beats the hell out of attempting to file a story using a touchscreen. 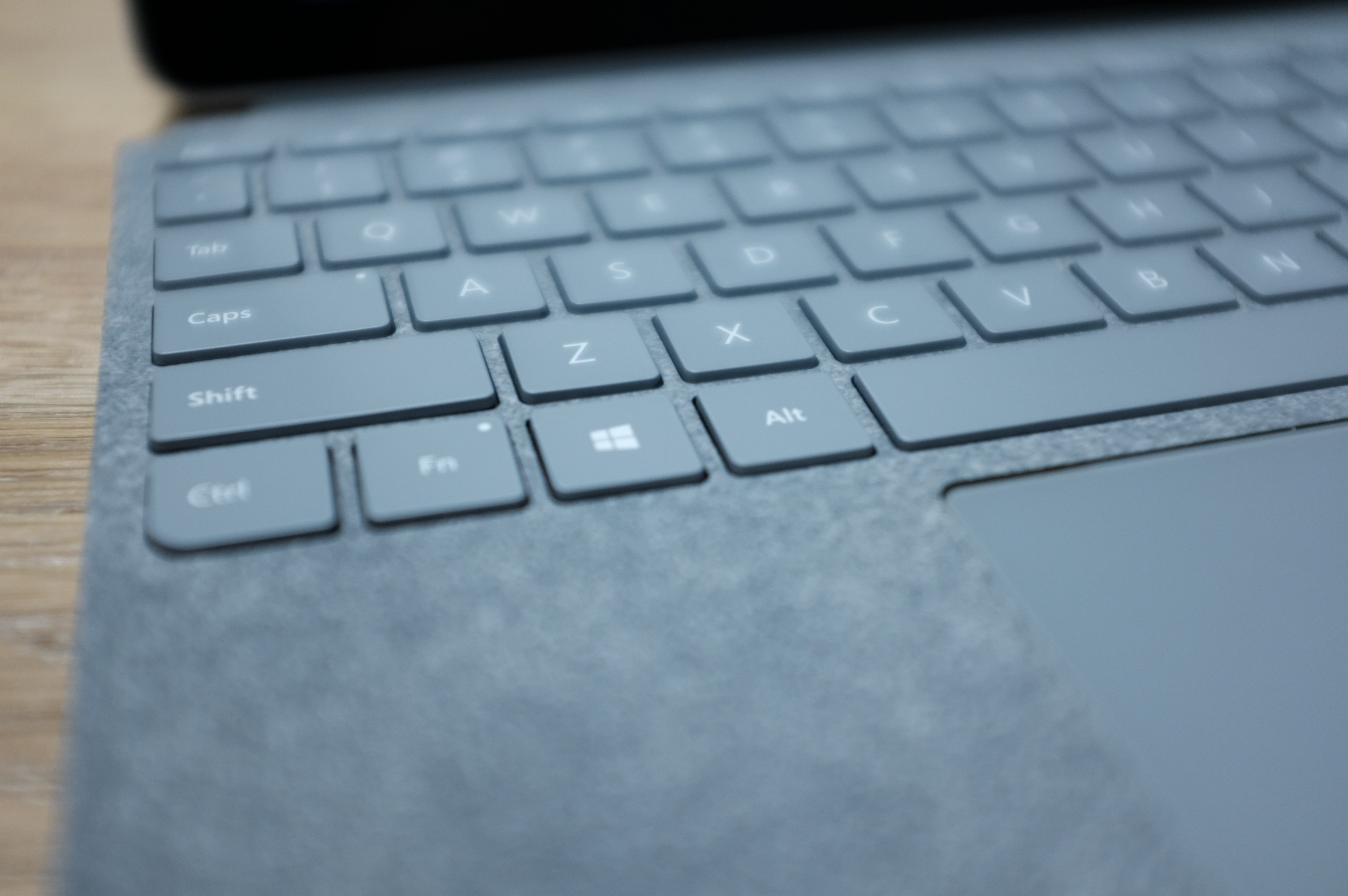 I’ve been using it a bit in meetings and still finding it tough to get used to it. The keys are soft and necessarily lack the sort of tactile impact I’m used to on my full-time laptop. There’s also the inarguable point that these kinds of devices really remove the “lap” part from the laptop equation.

Microsoft has press shots of happy users sitting cross-legged, with the device and keyboard nestled warmly in their lap. During my initial briefing, I asked a rep whether he thought that was a reasonable use case. He gingerly attempted to recreate the pose — which is to say, it’s possible, but not particularly convenient.

You end up tensing your muscles so the whole thing doesn’t split apart. This is one category where Samsung’s Galaxy Tab S4 has the competition beat. Seems it would be easy enough to build a keyboard case that sticks together after a good jostle — but then, I’ve never attempted to make one myself. 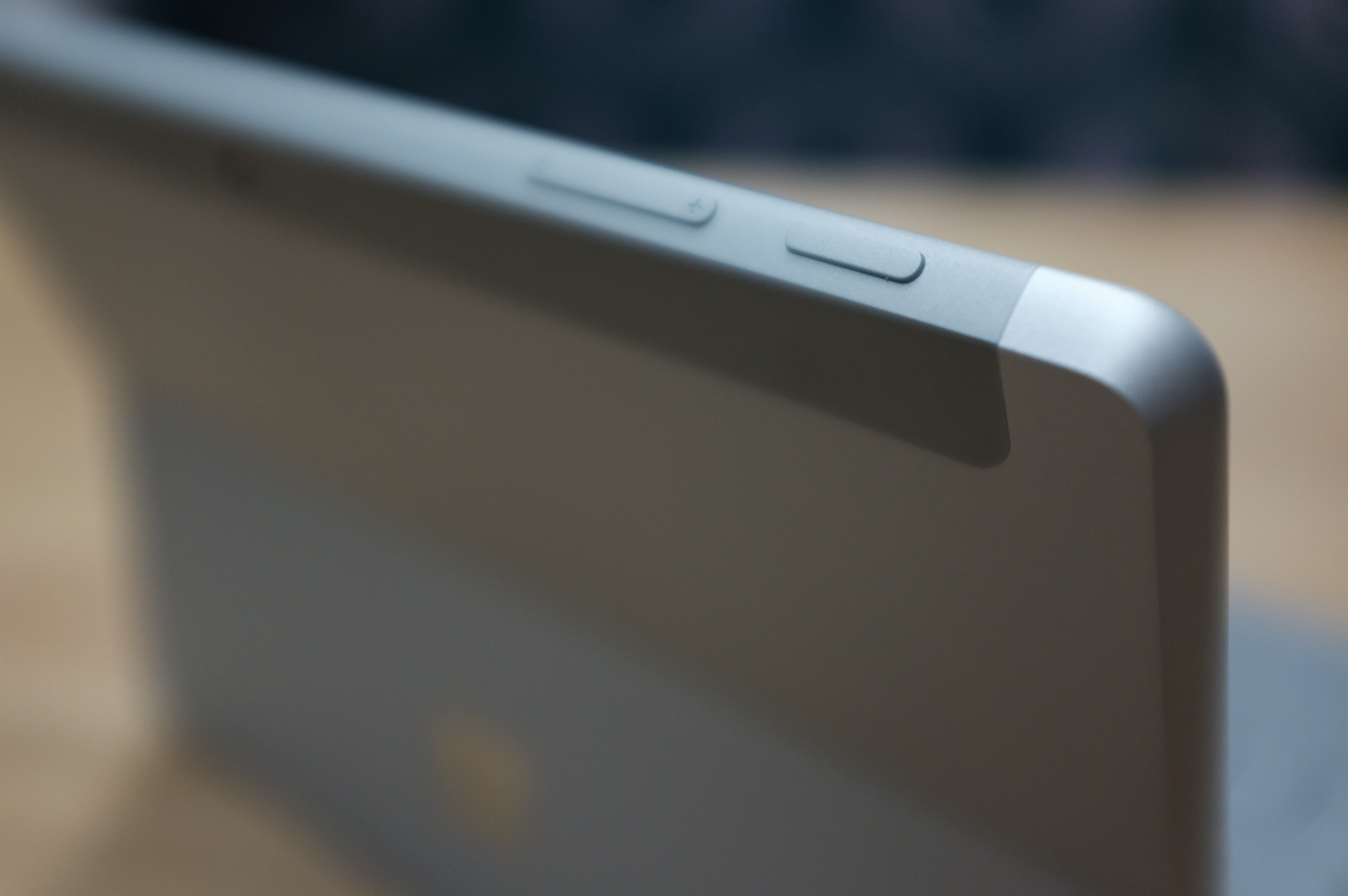 The lovely fabric covers that have been a hallmark of the service line are here on the 10-inch model. That, coupled with multiple matching peripherals, means the Go can pass as a pretty decent fashion accessory to slip in and out of a hand bag. The device itself is a bit on the chunky side, however, which has also been something of a hallmark with the Surface line.

Windows 10 S is back, as well. The locked-down operating system has certainly found its share of critics, but Windows RT it’s not. There are a bunch of implications for using the hobbled version of Microsoft’s operating system, but chief among them is the barring of apps not downloaded from the Windows app store. That puts the device at a decided disadvantage against the iPad, which apparently boasts around 1.3 million apps optimized specifically for the tablet form factor.

The tweaks are in place for security purposes, so the systems with lower specs can handle the workload — the latter certainly makes sense here.

More than anything, however, the inclusion betrays Microsoft’s broader intentions with the device. The 10 S has two distinct targets: students and older, less-savvy users who don’t want to be bogged down with the nuances and demands of a fully open operating system. 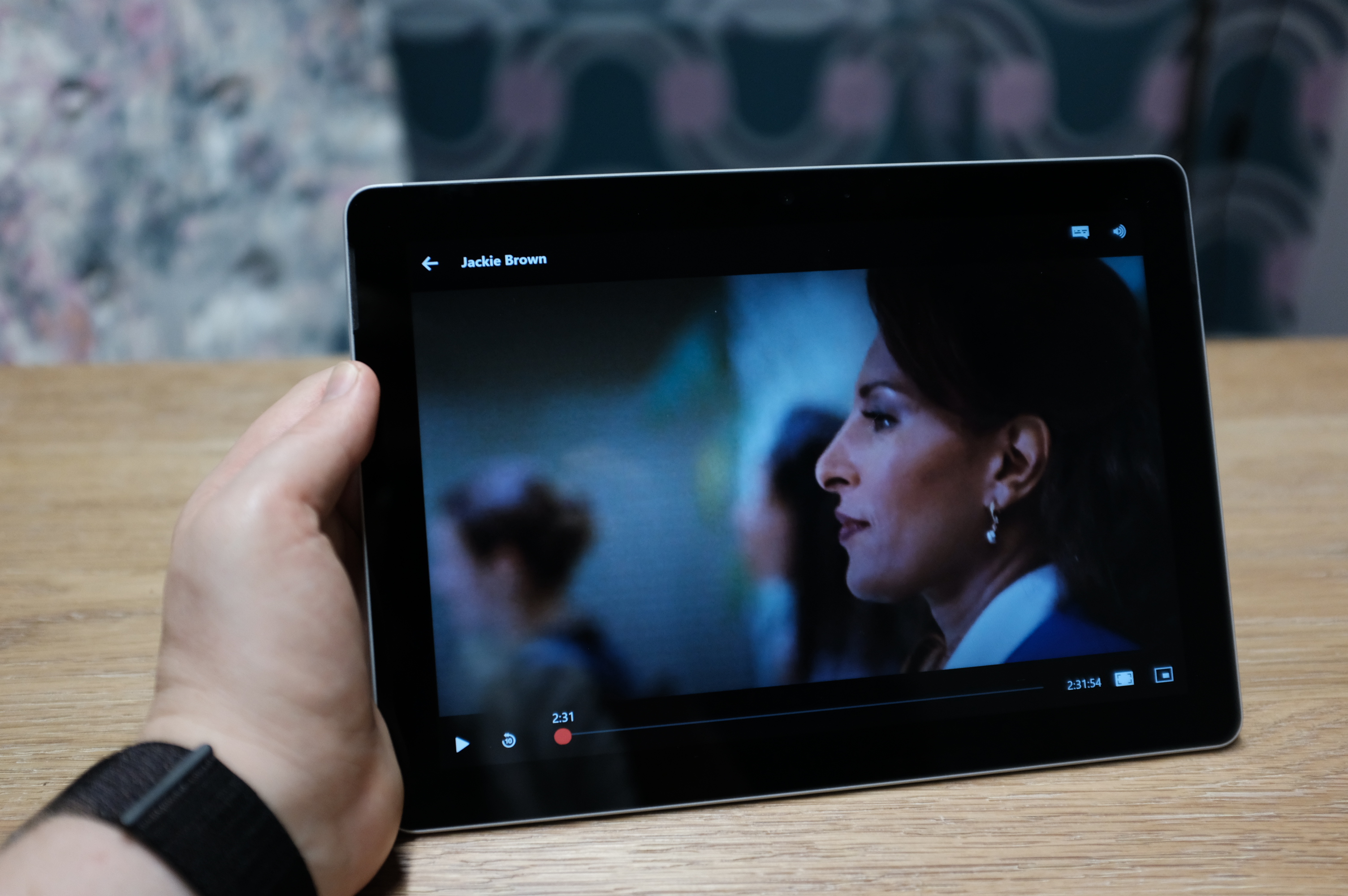 The first category is the tell here. Microsoft has been struggling to find the right way back into education in this post-Chromebook world. Like so much of what the company does, it’s taken an everything-and-the-kitchen-sink approach that includes everything from the $1,000 Surface Laptop to a new category of $189 third-party devices. There’s a lot to be said for that approach. After all, no two schools/students/teachers are alike. When you’ve got the scope and resources of a Microsoft, why the heck not just make something for as broad a user base as possible?

In the realm of education, the Surface Go represents a kind of middle-ground. It’s somewhere between a Chromebook and full-fledged tablet. Like the vast majority of convertibles, it doesn’t get the balance exactly right. But, then, no device is going to be everything to everyone. The price point will certainly make it too costly for a lot of classrooms, however.

For those schools who prefer to go with the Windows camp, due to its more mainstream usage beyond the classroom, it will ultimately be difficult to justify the premium when you can go out and pick up a Windows 10 S laptop for $189. After all, the main selling point of convertible functionality is the ability switch to tablet mode for entertainment purposes. Kids these days have enough distractions already, right?

What Windows does afford users that you won’t get on the iPad, however, is the ability to switch over into desktop mode. Apple’s mobile-only tablet approach is a pretty big roadblock toward becoming a full-fledge laptop replacement. That’s precisely why Samsung is going all-in on DeX desktop mode with the Tab S4.

Windows can do both, which is why these sorts of convertible devices are the sweet spot for Microsoft’s operating system. The company has also brought some nice additions over the years, like Windows Hello face login and a number of features for Pen input. Microsoft’s magnetic pen snaps onto the side of the device magnetically, which is good news for those of us who regularly misplace peripherals.

Of course, Microsoft’s always had some of the strongest productivity offerings around. Given the relative limitations here, however, I don’t think I’d want to rely on the Surface Go (or any other tablet-first convertible, for that matter) as my primary work device. As a supplemental portable device for the meetings when you don’t want to lug a bigger laptop around, on the other hand, it could certainly make some sense. 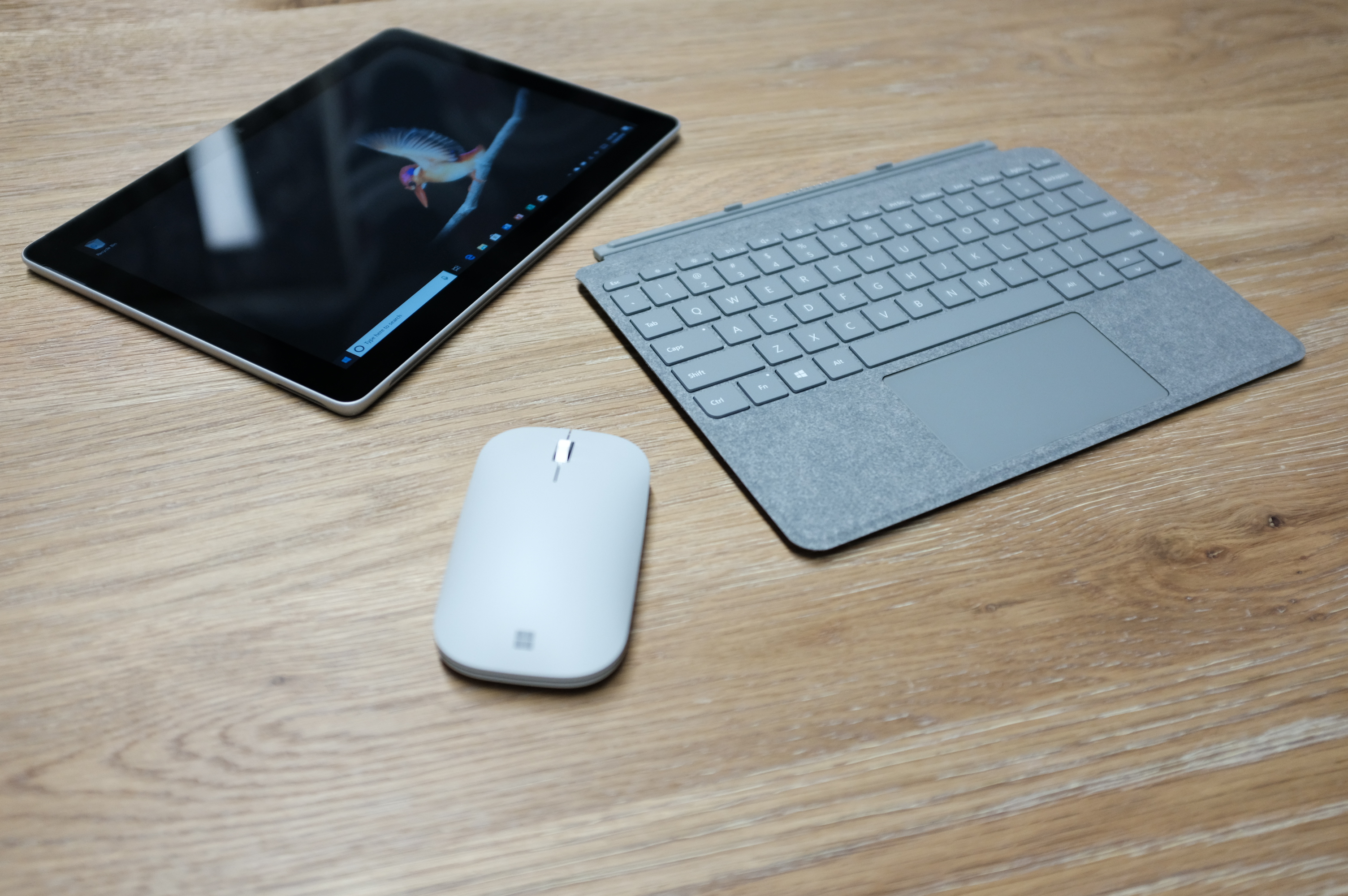 It’s easy to see why Microsoft made the Go. Convertibles are a rare bright spot in an otherwise stagnating tablet category. That’s part of what’s made the Surface line something of a surprise hit for the company. It’s hardware cachet that the company hopes will finally propel Microsoft into more mainstream tablet success.

And the Surface Go isn’t a bad little device, at the end of the day. At $400, it’s on the pricier side for a tablet, and certain sacrifices have been made for the sake of keeping the price down versus the souped up Surface Pro. And unlike other Surface devices, the Go is less about pioneering a category for Windows 10 than it is simply adding a lower-cost, portable alternative to the mix. As such, the product hits the market with a fair bit of competition. Acer and Lenovo have a couple, for starters, most of which fall below the Go’s asking price.

For Windows devotees looking for something smaller and portable with nice fashion sense, the Go is worth a look. It’s also worth having a look around at the competition. A better deal shouldn’t be too tough to find.