Roku is today bringing its free, streaming entertainment destination, The Roku Channel, to non-Roku devices for the first time, with a launch on both the web and on select Samsung smart TVs, ahead of a wider cross-platform rollout. The channel, which offers free, ad-supported movies and TV shows, will be available across PCs, mobile phones and tablets, the company says. In addition, Roku is updating the navigation on its own devices, including Roku players and Roku TVs, to include a new feature called “Featured Free,” which will directly point users to free content from The Roku Channel, as well as other apps, like ABC, The CW, CW Seed, Fox, Freeform, Pluto TV, Sony Crackle, Tubi and more.

The Roku Channel first launched last September, as a way for Roku to differentiate its connected media devices and TVs running Roku software from rivals like Amazon Fire TV, Apple TV and Chromecast.

Despite Roku’s popularity — it’s leading the internet video streaming device market — the company hadn’t really used its platform to promote its own content — the way Amazon pushes Prime Video shows on Fire TV owners, for example — until then.

The channel itself is populated with movies that Roku gained access to through licensing deals with studios like Lionsgate, MGM, Paramount, Sony Pictures Entertainment and Warner Brothers. However, it also leveraged Roku’s strength as a platform by pulling in free content from its existing channel partners (with permission), including American Classics, FilmRise, Nosey, OVGuide, Popcornflix, Vidmark and YuYu.

The content itself is monetized through advertising, which Roku’s in-house ad sales team is in charge of selling, with some portion going to partners. The company’s goal has been to smartly place the ads to respect the content they interrupt, and not to inundate viewers with the same ad over and over again.

With the channel’s expansion to the web and other TV platforms, Roku can further grow its advertising business, while also making the case for itself as a device platform. For existing Roku device owners, the channel is just another value-add for being a Roku user — and one that may keep them from jumping ship to another player in the future. 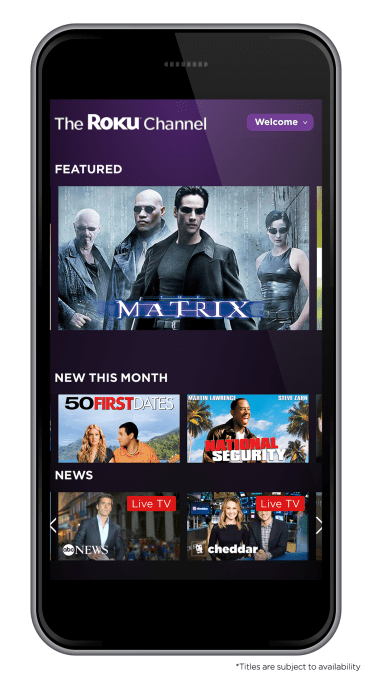 “Roku is the leading platform for free entertainment and our users love it. We’re delighted to deliver even more value to our customers without subscriptions, complicated logins or fees,” said Rob Holmes, Roku’s vice president of Programming and Engagement, in a statement about today’s expansion. “By expanding The Roku Channel to the Web, we’re broadening the access points to high-quality, free streaming entertainment. With Featured Free, we’re making it easy for our customers to see the great, free content already available on the Roku platform in one place, while creating value for our content providers by connecting them with Roku’s growing audience.”

Meanwhile, Roku is again taking advantage of its platform nature with the launch of the “Featured Free” section on its home screen.

This top-level navigational menu — just above “My Feed” on Roku’s home screen — will include a list of popular free content from its channel partners. The shows are identified by name and include a thumbnail image, but it doesn’t indicate which partner’s channel they’re coming from. And, when launched, customers are taken directly to the content itself. 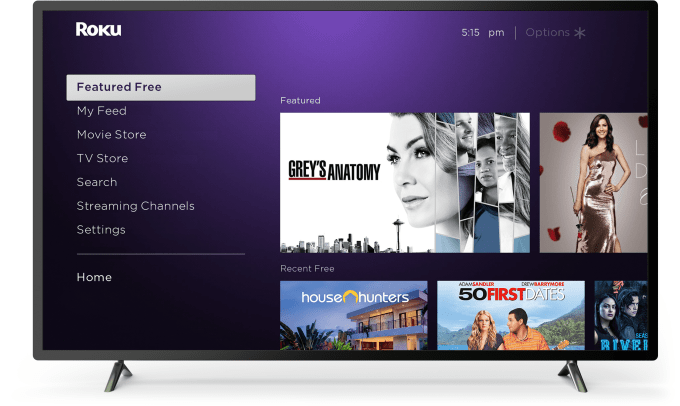 This section will include the latest in-season episodes of top network shows, full past-season catch-ups, classic series and hit movies.

The news of these launches follows a recent report from Variety that claimed Roku is planning to launch its own Amazon Channels-like subscription marketplace, as well. The report said Roku would bring together a number of paid subscription services into the same section, to make it easier for consumers to subscribe to paid channels without needing to first find the right app. 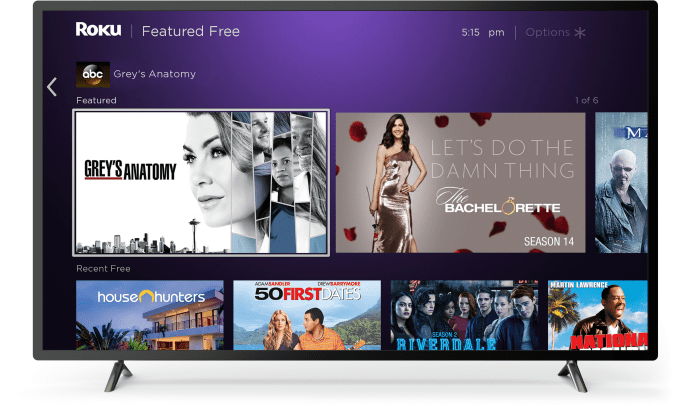 The “Featured Free” section paints a good picture of what this new subscription marketplace could look like — a single destination where the content itself, and not the channel it comes from, is what’s highlighted.

These new features also indicate a shift in Roku’s larger business from being fully reliant on device sales, to transitioning more into services; for now, specifically ad-supported services.

Roku is expected to report its earnings later today, after the market’s close, so the timing of the launches is not coincidental. Wall Street is expecting a net loss of $0.15 per share, down from $0.18 in the year-ago quarter, and sales up 41.46 percent to reach $99.6 million, in Q2. Overall, analysts predict Roku will report annual sales of $697.9 million.

Roku says the “Featured Free” section will begin to roll out to U.S. users starting today, and will reach all customers over the weeks ahead.

The Roku Channel, meanwhile, is available on the web as of now, via TheRokuChannel.com.