It’s been a long and trip-filled wait but mixed reality headgear maker Magic Leap will finally, finally be shipping its first piece of hardware this summer.

We were still waiting on the price-tag — but it’s just been officially revealed: The developer-focused Magic Leap One ‘creator edition’ headset will set you back at least $2,295.

So a considerable chunk of change — albeit this bit of kit is not intended as a mass market consumer device (although Magic Leap’s founder frothed about it being “at the border of practical for everybody” in an interview with the Verge) but rather an AR headset for developers to create content that could excite future consumers.

Here we go. Magic Leap One Creator Edition is now available to purchase. So if you’re a #developer, creator or explorer, join us as we venture deeper into the world of #spatialcomputing. Take the leap at https://t.co/8HbsM1yNQo #FreeYourMind pic.twitter.com/mpEqNFltlo

A ‘Pro’ version of the kit — with an extra hub cable and some kind of rapid replacement service if the kit breaks — costs an additional $495, according to CNET. While certain (possibly necessary) extras such as prescription lenses also cost more. So it’s pushing towards 3x iPhone Xes at that point.

The augmented reality startup, which has raised at least $2.3 billion, according to Crunchbase, attracting a string of high profile investors including Google, Alibaba, Andreessen Horowitz and others, is only offering its first piece of reality bending eyewear to “creators in cities across the contiguous U.S.”.

Potential buyers are asked to input their zip code via its website to check if it will agree to take their money but it adds that “the list is growing daily”.

We tried the TC SF office zip and — unsurprisingly — got an affirmative of delivery there. But any folks in, for example, Hawaii wanting to spend big to space out are out of luck for now… 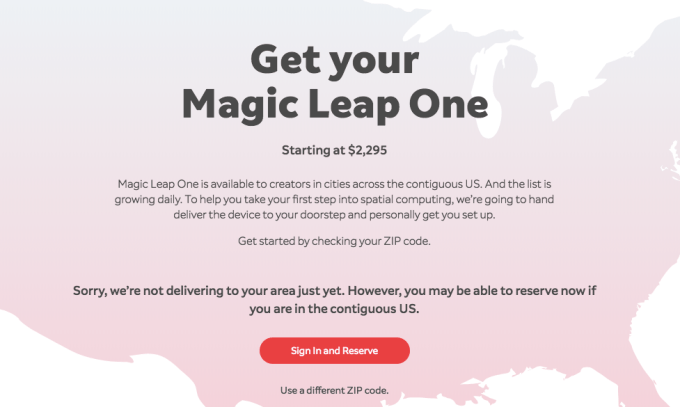 CNET reports that the headset is only available in six U.S. cities at this stage: Chicago, Los Angeles, Miami, New York, San Francisco (Bay Area), and Seattle — with Magic Leap saying that “many” more will be added in fall.

The company specifies it will “hand deliver” the package to buyers — and “personally get you set up”. So evidently it wants to try to make sure its first flush of expensive hardware doesn’t get sucked down the toilet of dashed developer expectations.

It describes the computing paradigm it’s seeking to shift, i.e. with the help of enthused developers and content creators, as “spatial computing” — but it really needs a whole crowd of technically and creatively minded people to step with it if it’s going to successfully deliver that.