Kidbox, a subscription clothing box similar to Stitch Fix – but aimed at parents who dislike kids’ clothes shopping (aka all of us) – is now launching its own private label kids’ brands. At launch, the three clothing brands – Miki B., Kid’s Club, and Baby Basics – will join the startup’s over 130 existing brand partners, such as Adidas, DKNY, 7 for All Mankind, Puma, Jessica Simpson, Reebok, Diesel and others.

The company had said earlier this year that it would soon be branching out into its own brands with the arrival of its fall 2018 back-to-school box.

Having sent out its first box of clothing during the back-to-school shopping season in 2016, Kidbox now has two years of data under its belt to inform its designers what kids clothing is selling. Its boxes, similar to Stitch Fix, are put together after parents fill out a profile. The offer their kids’ sizing information, age, and what sort of styles, colors and patterns, they like and hate. Kidbox then preps a box accordingly, and anything the child doesn’t want – or mom or dad don’t want to buy, that is – can be sent back.

However, Kidbox heavily incentives its customers to keep the whole box – it’s around half a dozen items for under $100, which is reasonable. In fact, it can cost more to return items, as you then pay the price on the tag instead of receiving the whole-box discount.

With its new private labels, Kidbox aims to grow its margins further.

“We believe we’ve identified a void in the children’s apparel marketplace,” Kidbox CEO Miki Berardelli told TechCrunch this spring, when referencing its plans to sell its own clothing. “The style sensibility of our exclusive brands will all have a unique personality, and a unique voice that’s akin to how our customers describe themselves. It’s all really based on customer feedback. Our customers tell us what they would love more of; and our merchandising team understands what they would like to be able to procure more of, in terms of rounding out our assortment,” she said. 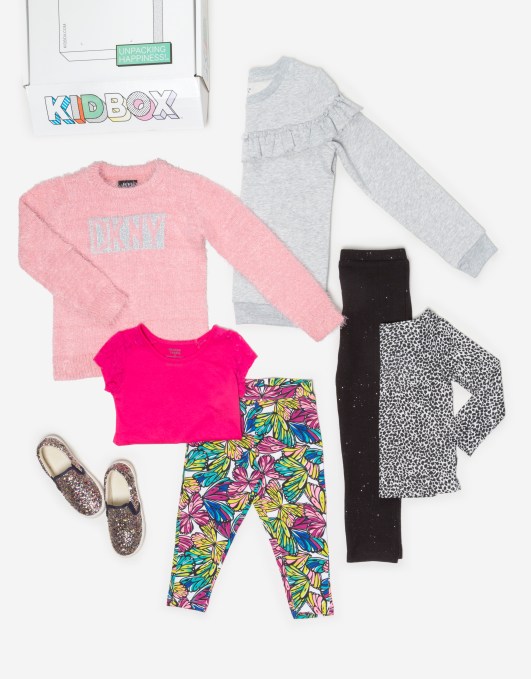 The company at the time was fresh on the heels of a $15.3 million Series B focused on scaling the business, which included bringing the new lines to its customers.

The lines were created by Kidbox’s own design team, which includes designers from brands like Tory Burch, Burberry, Bonobos, and J.Crew. The team focused on every aspect – like  fabric, color, pattern, and cut. They decided on using 100 percent cotton jersey, so the clothes will hold up and become wardrobe staples.

Each Kidbox shipment will now feature at least one of its own brands, the company says.

In addition to the new brands, Kidbox also teamed up with French Toast on a $68 uniform box for boys and girls that caters to kids whose schools enforce dress codes.

Kidbox today competes with other kids clothing subscription boxes like Rockets of Awesome, Kidpik, Mac & Mia, fabKids, and others. As a parent and customer of a couple of these, what I like about Kidbox is the wearability its items, which tend to be more practical choices, and its affordability. My child likes that the Kidbox often comes with a small surprise – and always includes crayons and stickers, too.