Days after raising $500 million via a strategic investment from travel giant Booking Holdings, Chinese ride-hailing giant Didi Chuxing has continued its international push with the launch of a local business in Japan.

Its new Japan-based unit is a joint venture with SoftBank, a longtime Didi investor, which has been in the works since an announcement back in February. Today’s news isn’t that the service is live yet — it isn’t — but rather than the JV has been formally launched.

Didi did say, however, that it plans to launch services for passengers, drivers and taxi operators in Osaka, Kyoto, Fukuoka, Tokyo and other major cities from autumn this year. Didi said that its users in China and Hong Kong will be able to use the soon-to-launch Japan service through their regular Didi app — that’s interesting since a ‘roaming’ strategy involving Lyft and others arranged years ago never came to fruition.

And yes, you did read correctly that taxi operators are part of the target audience. That’s because Japan doesn’t allow unlicensed private cars to operate as taxis.

That’s made the country a real challenge for Uber, which has held talks with taxi operators, and it also explains why one of the leading ride-hailing service in Japan — JapanTaxi — is backed by the taxi industry. JapanTaxi is even owned by an insider, Ichiro Kawanabe, who runs Japan’s largest taxi operator Nihon Kotsu and heads up the country’s taxi federation. 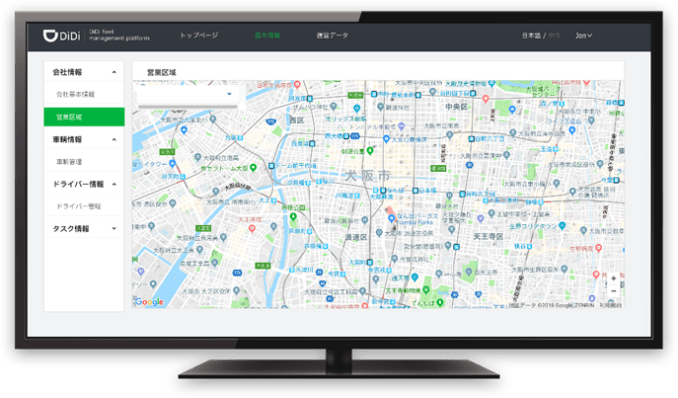 Working with taxi operators means Didi has a fleet management platform, as above, as part of its Japan-based service.

That concession on working with taxis doesn’t necessarily mean that Didi isn’t focused on widening the market by enabling “ride-sharing” with non-taxi drivers in the future.

Reuters reports that SoftBank supremo Masayoshi Son — one half of the Didi Japan joint venture — made some family scathing comments at an annual event.

“Ride-sharing is prohibited by law in Japan. I can’t believe there is still such a stupid country,” Son is said to have remarked.

Didi, of course, is playing things more cautious as it rides into Japan.

The company said that the country, which is the world’s third-largest market based on taxi ride revenue, “holds great potential as a market for online taxi-hailing.”

“There is earnest demand for more convenient urban and regional transportation services, especially in light of the growing population of senior citizens,” Didi added via a statement.

The Japanese expansion is another example of Didi’s push to internationalize its service beyond China in 2018. Last year, it raised $4 billion to double down on technology, AI and move into new markets, and this year it has come good on that promise by entering Mexico, Australia and Taiwan. While over in Brazil, it leaped into the market through the acquisition of local player and Uber rival 99.

The 99 deal was a particularly interesting one since Didi had previously backed the company via an investment. Didi didn’t say much about the mechanics of that strategy, but it has investments in ride-sharing companies worldwide, including Lyft, Grab, Ola, Careem and Taxify, which you’d imagine, like 99, could be converted into full-on acquisitions at some point in moves that would speed up that international expansion.