Giphy is coming to Twitch. For the first time, Giphy is bringing its library of animated GIFs to the Amazon-owned game streaming service. The company today is launching a Giphy extension for Twitch streamers that will allow viewers to react in real-time using GIFs during a broadcast. The idea is that GIFs could make streams more engaging and entertaining, which would, in turn, attract retain viewers for longer periods of time.

Twitch extensions were first introduced last year, but only recently did Twitch add support for running multiple extensions at once. That could encourage more developers to try out the Giphy extension, without having to give up their other favorite overlays.

To use the new extension, the streamer will first configure which part of the screen area will be used to display the GIFs viewers post. Once the extension is activated, viewers will be able to access it during a broadcast via a Giphy icon and the search terms they enter into the message bar. 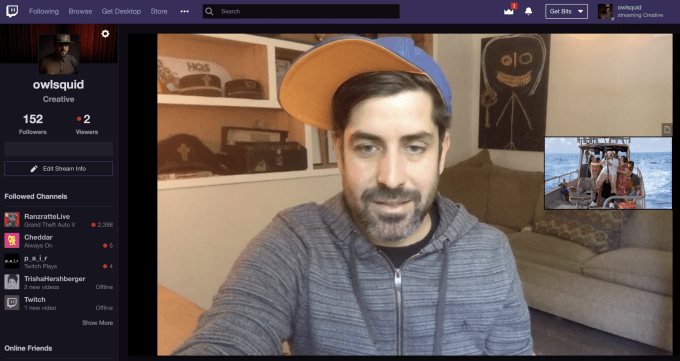 Twitch is not the first game streaming site to experiment with GIF reactions. The newer site Caffeine had this as a feature, too, but pulled it before launch because they found it could be used for harassment. Twitch and Giphy are hoping to not make the sane mistake by curating the catalog of GIFs that can be shared.

According to Twitch, Giphy’s content is moderated to remove those GIFs that are “overtly offense” to any race, gender, ethnicity or community. It’s also limiting GIFs to those with a PG rating and below, which will prohibit users from posting GIFs with violence, sexual references, and other lewd terms, it says.

“Extensions are a great framework designed to make channels on Twitch more interactive so creators can better engage and retain their fans,” said Amir Shevat, Twitch VP of Developer Experience, in a statement. “With Giphy tapping into their extensive library of animated GIFs for their new Extension, it adds a fun and compelling new element to the social video experience that is sure to resonate with the current meme generation.”

Extensions are one of Twitch’s differentiating features in the game streaming market. Thanks to Twitch’s scale, there are now thousands of these add-ons and overlays in development, and over 250 which have gone live since the feature’s launch. Dozens of these, including Giphy’s, also work alongside others, allowing streamers to better customize their broadcasts and channels.