Amidst questions about how conspiracy theorists’ accounts are treated during today’s House Judiciary hearing with Facebook, Google and Twitter on social media filtering practices, Representative Steve King (R-Iowa) dropped a bombshell. “What about converting the large behemoth organizations that we’re talking about here into public utilities?”

King’s suggestion followed his inquiries about right-wing outlet Gateway Pundit losing reach on social media and how Facebook’s algorithm worked. The insinuation was that these companies cannot properly maintain fair platforms for discourse.

The representative also suggested there may be need for “review” of Section 230 of the Communications Decency Act that protects interactive computer services from being treated as the publisher of content users post on their platforms. If that rule was changed, social media companies could be held responsible for illegal content, from copyright infringement or child pornography, appearing on their platform. That would potentially cripple the social media industry, requiring extensive pre-vetting of any content they display.

The share prices of the tech giants did not see significant declines upon the representative’s comments, indicating the markets don’t necessarily fear that overbearing regulation of this nature is likely.

Here’s the exchange between King and Google’s Global Head of Public Policy and Government Relations for YouTube Juniper Downs:

King: “Ms. Downs, I think you have a sense of my concern about where this is going. I’m all for freedom of speech, and free enterprise, and for competition and finding a way that competition itself does its own regulation so government doesn’t have to. But if this gets further out of hand, it appears to me that Section 230 needs to be reviewed.

And one of the discussions that I’m hearing is ‘what about converting the large behemoth organizations that we’re talking about here into public utilities?’ How do you respond to that inquiry?”

Downs: “As I said previously, we operate in a highly competitive environment, the tech industry is incredibly dynamic, we see new entrants all the time. We see competitors across all of our products at Google, and we believe that the framework that governs our services is an appropriate way to continue to support innovation.”

Unfortunately, many of the representatives frittered away their five minutes each asking questions that companies had already answered in previous congressional hearings or public announcements, allowing them to burn the time without providing much new information. Republican reps focused many questions on whether social media platforms are biased against conservatives. Democrats cited studies saying metrics do not show this bias, and concentrated their questions on how the platforms could protect elections from disinformation. 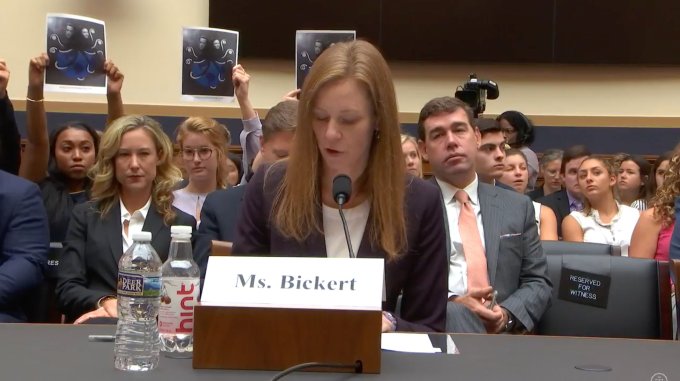 Protestors during the hearing held up signs behind Facebook’s Head of Global Policy Management Monica Bickert showing Facebook CEO Mark Zuckerberg and COO Sheryl Sandberg as heads of an octopus sitting upon a globe, but the protestors were later removed.

One surprise was when Representative Jerrold Nadler (D-New York) motioned to cut the hearing for an executive session to discuss President Trump’s comments at the Helsinki press conference yesterday that he said were submissive to Russian president Vladimir Putin. However, the motion was defeated 12-10.

Later in the hearing, Facebook came under cross-fire from Democrats and Republicans over allowing Pages that bullied massacre survivors and encouraged more shootings. Facebook defended itself saying it removes these kinds of posts. “If they posted sufficient content that it would violate our threshold, then the Page would come down,” Facebook’s Bickert noted, but became less transparent saying, “The threshold varies depending on the different types of violations.”

Facebook will need to come up with a much clearer rubric for exactly how that threshold varies, and make that publicly available, or it will continue to be seen as indecisive and lacking in proper response.

For more from today’s hearing: