It’s been an interesting past few years for the virtual reality industry and while there is still plenty for insiders to pin their hopes on in 2018, it’s no secret that things have been progressing a bit slower than more bullish parties would have hoped for. Yet for all of what potential still remains unfulfilled, it seems fair to say that storytellers are still just as entranced (and occasionally bewildered) by the power of the fully immersive medium.

Penrose Studios has been one of the more shining stars in the narrative-based VR content space. Their work has drawn easy comparisons to Pixar’s and their efforts have seemed to influence other studios in the space as well.

The VR studio announced today that they have closed a $10 million round of Series A funding led by TransLink Capital. Also participating in the round were Marc Benioff, Will.i.am, Korea Telecom and Co-Made with returning investment from Sway Ventures, 8VC and Suffolk Equity.

While some competing venture-backed virtual reality content studios may be focusing their efforts on creating streamlined processes to build fast and cheap stories, Penrose appears to be more squarely focused on reaching its creative visions first and foremost.

The company’s latest major project, Arden’s Wake, is one of the more captivating VR short films I’ve seen to date. The ambitious half-hour animated feature pairs a tightly scoped storyline with a highly polished design that is whimsical and delightful in a way few other studios have managed to figure out. The startup began development of Arden’s Wake 18 months ago, sharing the finished product, which features voice acting from Alicia Vikander, at the most recent Tribeca Film Festival. 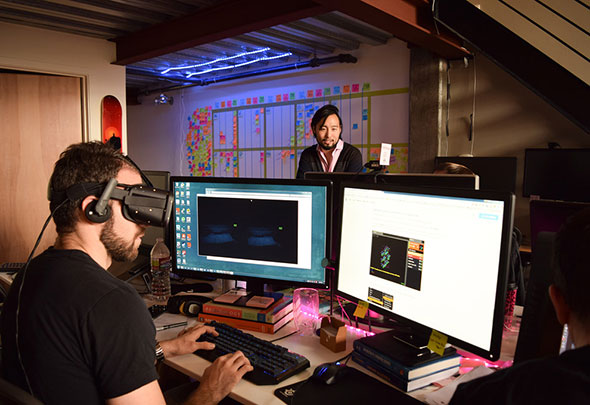 The film certainly seems like an expensive endeavor, and while CEO Eugene Chung didn’t talk numbers, he also didn’t confirm whether the startup would be charging users to download the film and view on home VR devices. The company’s previous releases, “Allumette” and “The Rose and I,” are currently offered as free downloads on major VR platforms.

Overall headset numbers are still fairly low however, and for venture-backed startups in this space I would imagine that there’s a strong desire to wait until there’s a more sizable audience size before cutting access off to the potential new fans who wouldn’t pay to download anyway. While the unit economics of making money from individual downloads of narrative-based titles is still a bit of a Wild West in the VR world, it’s a critical issue that can probably only be punted for so long.

Chung, who previously worked on narrative storytelling at Oculus, seems optimistic about virtual reality hardware’s near-term prospects and the rise of so-called standalone headsets which integrate the compute power, display and battery into a singular device that is untethered and more powerful than past phone-based options.

The next of four new projects that Penrose is currently developing is being built with these standalone devices as their central focus though Chung tells me the startup is also starting to look more seriously about what there is to be done with phone-based augmented reality systems based on the ARKit and ARCore platforms and what does and does not make sense to bring to them in the future.