The right music can make a boring photo or video epic, so Instagram is equipping users with a way to add popular songs to their Stories. TechCrunch had the scoop on the music feature’s prototype in early May, and now it’s launching to iOS and Android users in 6 countries including, the U.S. Thanks to Facebook’s recent deals with record labels, users will be able to choose from thousands of songs from artists including Bruno Mars, Dua Lipa, Calvin Harris and Guns N’ Roses. The launch could make Instagram Stories more fun to post and watch in a way that copyrights won’t allow on Snapchat, while giving the app a way to compete with tween favorite Musical.ly. 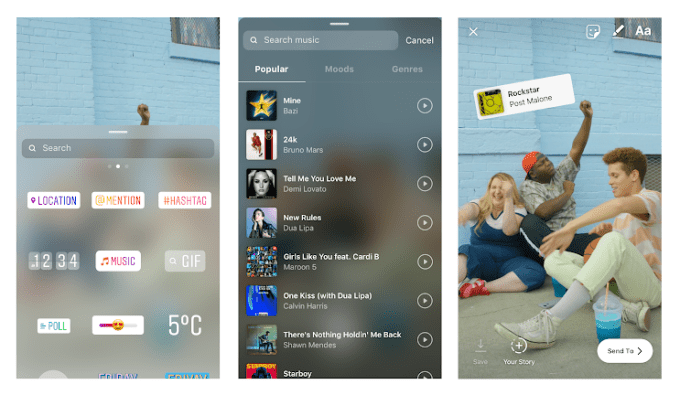 And just a week after revealing its app has 1 billion monthly users, the company also announced today that Instagram Stories has 400 million daily users, up from 300 million in November and 250 million a year ago. That means Instagram Stories is growing about six times faster than Snapchat’s whole app, which only added 13 million daily users over the six months of Q4 2017 and Q1 2018 to reach 191 million.

Snapchat’s growth rate fell to its slowest pace ever last quarter amidst a despised redesign, while Instagram Stories has steadily added unique and popular features like Highlights, Superzoom and resharing of public feed posts. Instagram said last September that it had 500 million total daily users, so it’s likely that a majority of community is now hooked on the Stories format Snapchat invented.

“Now you can add a soundtrack to your story that fits any moment and helps you express how you’re feeling,” Instagram writes. To access the new music feature, users will be able to choose a special song sticker after they shoot a photo or video. They can search for a specific song or artist, or browse by mood, genre or what’s popular. Once they select a song, they can pick the specific snippet they want to have accompany their content. Alternatively, iOS users can switch to the Music shutter mode in the Stories camera to pick a song before they capture a photo or video so they can sync up their actions to the music. That will come to Android eventually, and the whole feature will roll out to more countries soon following today’s launch in Australia, New Zealand, France, Germany, Sweden, the UK and the U.S. [Correction: The feature is launch in version 51 of Instagram, not in 51 countries.]

When friends watch a music-equipped Story, the song will post automatically. They’ll also be able to tap on the sticker to see artist and song title info, but for now these stickers won’t link out to a musician’s Instagram page or their presence on streaming services — though that would certainly be helpful. I also suggest that Instagram should create deeplinks that artists can share with their fans that automatically opens the Stories camera with that song’s sticker added.

It’s easy to imagine users lip syncing to their favorite jams, adding clashing background music for comedic effect or earnestly trying to compose something emotionally powerful. Suddenly people ‘Gramming from home will be a new way to entertain themselves and their pals. 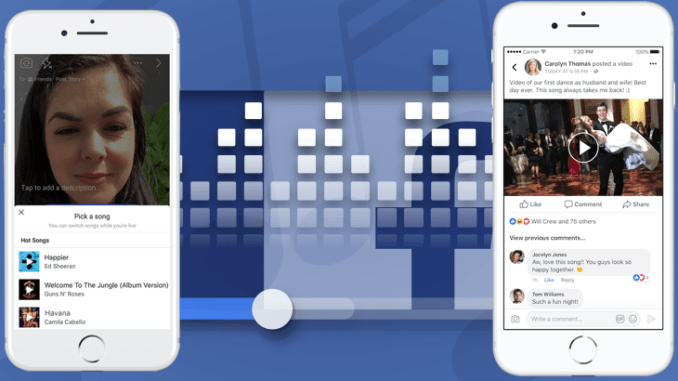 Instagram tells me that musicians and rights holders will be compensated for the use of their songs, but wouldn’t specify how those payments would work. Facebook secured deals with all the major record labels and many independents to pave the way for this feature. Facebook has since announced that users can also add copyrighted music soundtracks to videos on their own before uploading and they wouldn’t be taken down like before. It’s also started testing a Lip Sync Live feature with a collection of chart-topping hits.

The big question will be whether the “thousands” of songs available through today’s launch will cover what most users want to hear, otherwise they might just be disappointed. With a few enhancements and a widened catalog, Instagram Music could become a powerful way for artists to go viral. All those shaky phone camera clips are going to start looking more like indie music videos you’ll watch til the end.