Apple this morning launched Schoolwork, a free app for teachers that was first introduced at Apple’s education event in Chicago back in March. The cloud-based app allows teachers using iPads in the classroom to create and distribute handouts and other assignments, collaborate individually with students, track students’ progress, and – perhaps most notably – allows teachers to assign specific activities within educational apps.

That means instead of pointing students to download an app and then give them instructions on how to access the individual task, teachers can instead guide students directly to a specific lesson with an app.

This lets schools tap into the power of Apple’s App Store ecosystem, which has benefitted from being a more curated, trusted experience, where many kids’ app publishers launch their new and updated apps first and/or keep larger catalogs. 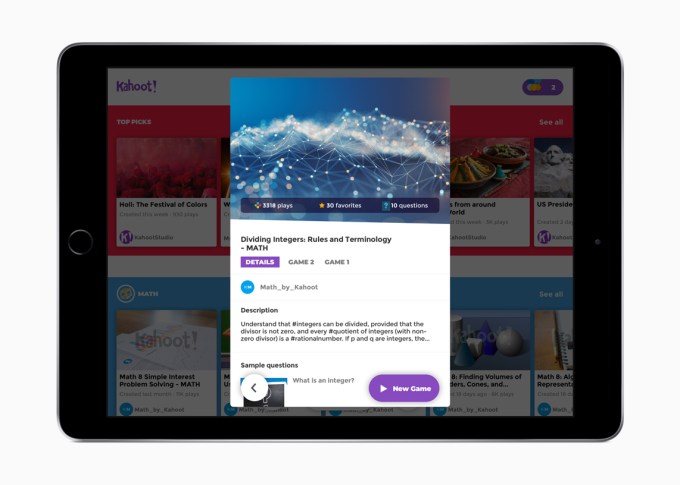 With this ability to assign in-app tasks, teachers can see how well the student is doing with the given assignment, not just their usage of the app overall. And they can also see how well the whole classroom is doing from their own dashboard, too.

Apple additionally emphasized the privacy elements to Schoolwork when it was first announced, and it reiterates them today. 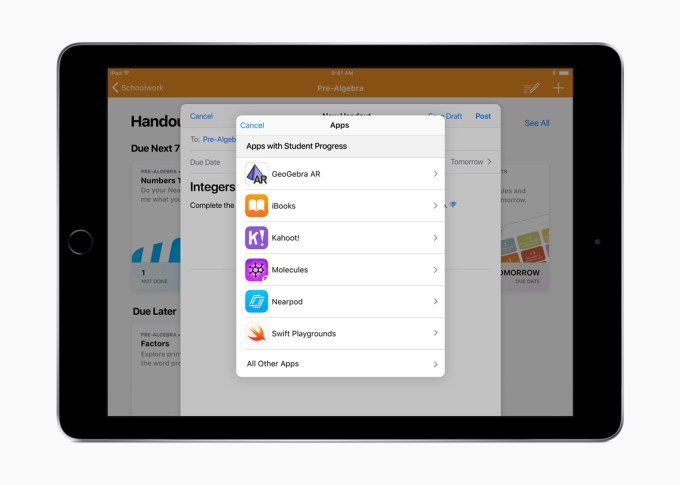 Schools get to “create, own and control” the accounts used by students, says the company, and they get to determine when student progress information is shared.

Apple cannot see the student activity, either, as it stays within the system.

Privacy is a key selling point these days for Apple products. It could spur more adoption of its hardware and software devices in the classroom, even though its new $299 iPads for schools are higher priced than some of the low-end Chromebook options from Google that can range $100 to $150, for example.

The new iPads, along with software for digital book creation, Classroom for Mac, an updated Swift Playgrounds app, and other educational tools were also shown off at the Chicago event earlier this year. 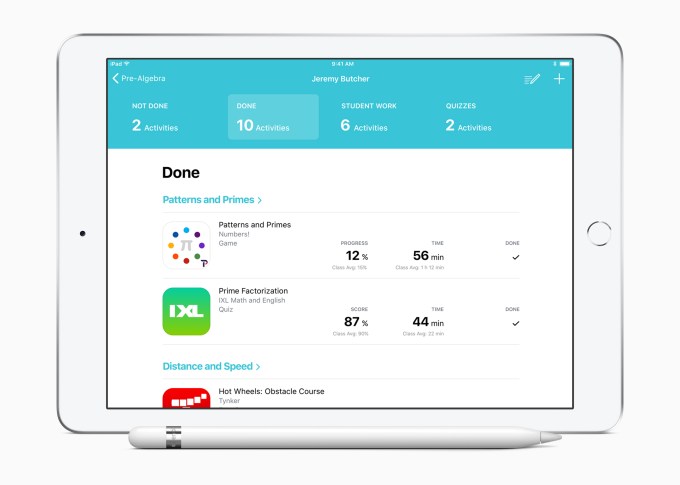 Schoolwork is designed to work with the Classroom app, which now runs on both iPad and Mac.

The Classroom app lets teachers view students’ screen in class, share documents with students, assign shared iPads, and reset student passwords. Students, meanwhile, use Schoolwork to view the content teachers’ share – like announcements, handouts, documents, PDFs, and web links –  and track which of their assignments are due. 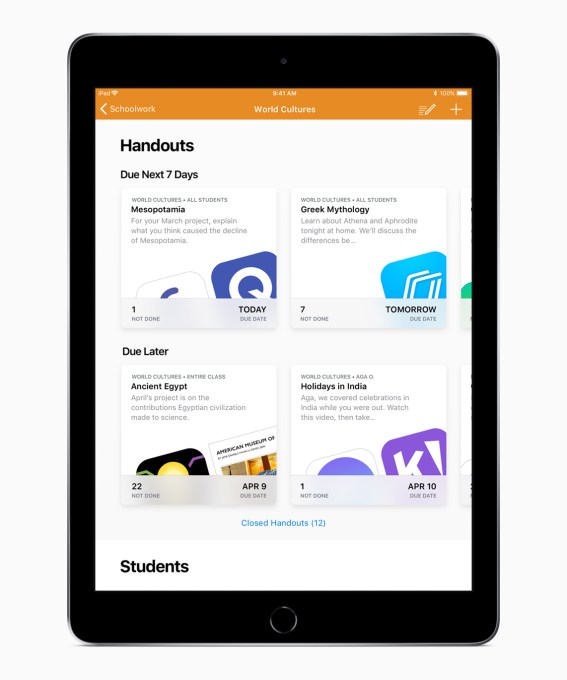 Apple’s efforts in education come at a time when Google is winning the market with its Chromebooks, which have a reported nearly 60 percent share in the classroom, according to estimates.

But Apple’s devices may appeal for other activities beyond word processing and web research – its iPads for the classroom, for example, support Apple Pencil, including within iWork, as well as Logitech’s $49 “crayon.” Teachers can create lightweight iPad-based texts using iPad Author, and kids can learn to create AR apps in Swift Playgrounds.

Teachers can learn more about Apple’s educational tools on its dedicated site here.