Memrise, a UK startup whose eponymous language-learning app employs machine learning and localised content to adapt to users’ needs as they progress through their lessons, has raised another $15.5 million in funding to expand its product. The funding comes after a period of strong growth: Memrise has now passed 35 million users globally across its 20 language courses, and it tipped into profitability in Q1 of this year. Ed Cooke, who co-founded the app with Ben Whately and Greg Detre, told TechCrunch that this places it as the second-most popular language app globally in terms of both users and revenues.

This round, a Series B, was led by Octopus Ventures and Korelya Capital, along with participation from existing investors Avalon Ventures and Balderton Capital. (Previous investors have included the likes of Matt Mullenweg, Lerer Ventures and more.)

Memrise is not disclosing its valuation — it has raised a relatively modest $22 million to date — but Cooke (who is also the CEO) said the plan will be to use the funding to expand its AI platform and add in more features for users.

And also to move into bigger digs. He described the company’s current offices in the East End of London as in a “ne’er-do-well” kind of building. But the step up won’t be giant. “Funding makes me more frugal,” he told me.

The company originally started out as a general learning platform in 2010 before honing in on how to apply its principles of memorization and native content to get people to learn languages specifically. “We saw the importance of focus,” Cooke said.

The company uses several modern hooks in its approach to a very old problem: learning to speak different languages. They include building the service around both online and mobile versions, using “crowdsourced” native speakers to give people a sense of how people actually use the language (which can often be different from how it’s taught in classes), and by employing artificial intelligence to customise the product to each individual’s progress.

Memrise’s machine learning, in fact, has been a key factor in helping to raise a little more awareness of the app: during WWDC Apple showed off Memrise on stage in its presentation of Create ML, a new product that lets non-technical people train machine learning services using their own custom data on a Mac (which also cuts down the time needed to do so). It’s not an Apple-only shop: Google named Memrise an app of the year in 2017.

The crowdsourced content, meanwhile, had an interesting fillip, too, when Memrise ran a Kickstarter campaign in 2015 to fund a “Membus,” a double-decker bus that toured through Europe collecting clips of “tens of thousands” of native speakers. “Learning from native speakers is a popular feature of the app,” Cooke said, as it gives users more than “just a computerised version of how you say something.”

The clips in turn populate the lessons to give users examples of regular people saying things: 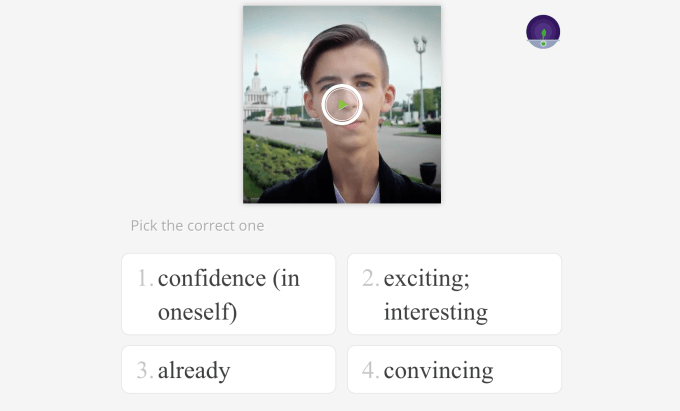 Cooke’s background is in psychology and philosophy, and he holds a distinction as a “Grand Master of Memory“. And memory indeed comes into the fabric of how the app works, as there is repetition and other devices used to help you not just ingest information but actually retain it. I actually have a personal connection to this: my daughter Eve’s school uses Memrise to supplement in-class learning, and well before this funding story came along, Eve had told me that her Memrise training has been a huge help in growing and remembering German vocabulary and how to use words correctly. (That’s at least her excuse for staring at a computer screen on a school night…)

The company’s services are based around a freemium model, where a free version lets you learn any language from any language (there are 200 combinations possible across the base), along with a review feature; and a paid tier starting at $4.90/month to add on other features like a “grammarbot”, pro chats, difficult words, speed review, listening skills, learning stats and more.

The company today is seeing the most growth in the 25-40 age group, but has a lot of younger (like my daughter) and older people using it as well. When raising the funding, Cooke said one regular question was about how likely it would be that a Google might wade in simply to improve its Translate app to obviate the need to learn anything at all.

“We believe that this is a misunderstanding about language learning,” Cooke said. “People don’t want to learn languages for pragmatic reasons but to be socially credible. You have to engage as a human being and be interested.” And Memrise things that if they can create an engaging enough experience for that base, its growth can expand even more.

“We’re in love with Memrise’s vision for language learning, and have been deeply impressed with the high engagement levels and tangible learning among their millions of users. We look forward to supporting this exceptionally diverse and talented team in their mission to enrich human consciousness through learning,” said Eyal Rabinovich, of Octopus Ventures, in a statement.