The cheaper $399 device boasts a much smaller footprint than its previous home theater products; the company says Beam is 60 percent smaller and 28 percent shorter than the Playbase. The speaker is available for pre-order starting today.

The company’s new home theater product will support Amazon Alexa controls at launch, alongside Airplay 2 connectivity, which will arrive in July. The product will be set up to gain support from other voice assistants in the future, the company says. You’ll be able to perform tasks like turning on the TV and changing the device’s volume; with FireTV support you’ll be able to query Alexa to direct you to specific movies and shows. 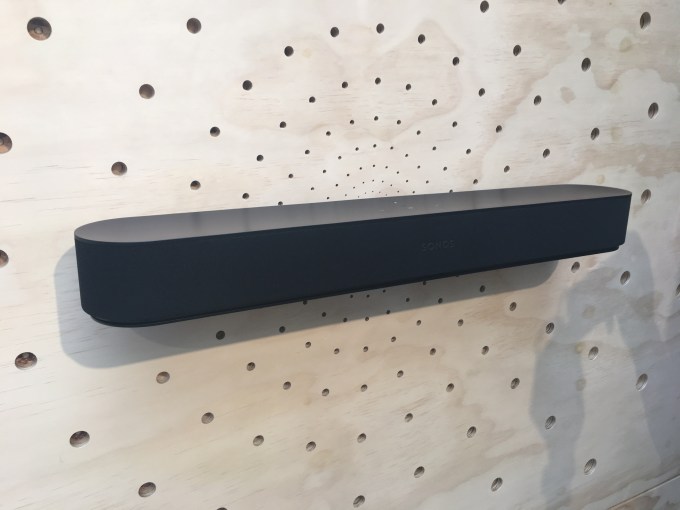 “We believe that people want a better way to listen,” said CEO Patrick Spence onstage at the event.

The product launch is an important one for Sonos, which is still seeking to expand its footprint in home audio products. In April, The Wall Street Journal reported that Sonos had filed confidentially for an IPO that could take place as early as this summer.

While the Santa Barbara company was the incumbent disruptor of the stodgy whole-room audio systems of the past, deep-pocketed tech giants like Google and Apple have invested heavily in audio streaming hardware and APIs. Sonos has found itself having to compete in a home audio market that is increasingly becoming more about the embedded AI tech of virtual assistants.

Apple’s $349 HomePod is just the latest competitor to prioritize more intelligent music playback; meanwhile there are dozens of speakers with Amazon’s Alexa and the Google Assistant. Last year, Sonos added Alexa functionality to its new product, its Sonos One speaker, which is also set to pick up support in July for Apple’s new Airplay 2 alongside the Playbase, Play:5 and the new Beam.