Grab, the ride-hailing firm that acquired Uber’s Southeast Asia business, is aiming to catalyze the early-stage startup scene in Southeast Asia after it launched an accelerator and investment unit called Grab Ventures.

The six-year-old company has already made investments and acquisitions — backing startups like Drive.ai and buying Indonesia’s Kudo and India-based iKaaz — and Grab Ventures will build on that by making 8-10 investments over the coming 24 month period, but it is also offering different kind of support. The firm will offer an accelerator program for “growth-stage” companies and play a hand incubating new services inside Grab, according to Chris Yeo, Head of Grab Ventures.

That accelerator effort — called ‘Velocity’ — will launch its first intake before the end of the year with around four to six companies per batch.

“It’s time for us to reflect on the tremendous support we’ve seen over the years and give back to the community,” he told TechCrunch in an interview. “We have a responsibility to empower the next generation of startups in Southeast Asia. We have a strong belief in taking a partnership approach, we know we can’t do it alone.”

On the partner side, Grab has recruited Singapore government agencies Info-communications Media Development Authority of Singapore (IMDA) and Enterprise SG to aid its efforts.

Taken together, Grab said it is aiming to help build an ecosystem of companies in Southeast Asia, a region of over 600 million consumers where the internet economy is tipped to grow from $50 billion per year in 2017 to over $200 billion by 2025, according to a recent report authored by Google. Ride-hailing as a segment is forecast to rise to $20 billion by 2025 up from $5 billion last year.

Grab believes that now it has reached scale with over 100 million downloads and more than 200 cities, the firm can help other startups rise up.

“Our object is to build new startups inside Grab and scale existing promising growth-stage startups. “Our hope for them is to grow from local leaders to regional champions and maybe global challengers,” said Yeo. 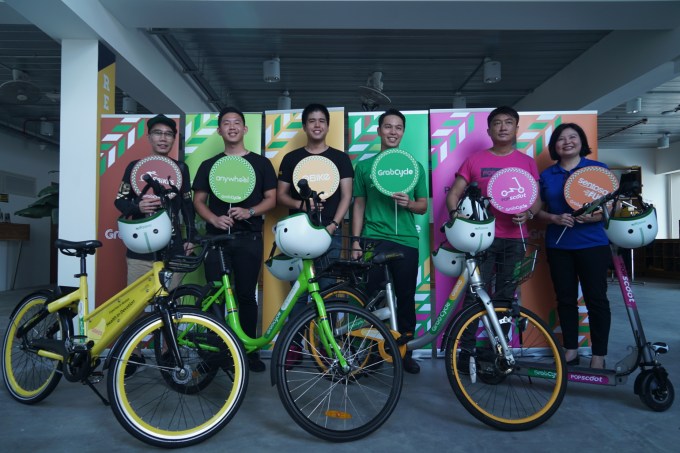 Grab Cycle is one business that Grab Ventures has incubated

Unlike traditional accelerator programs, Velocity isn’t aimed at a particular type of company while it is fairly general in terms of the stages that they are at. Yeo said the idea is to be flexible and work with companies that can benefit from Grab’s regional business and its various business units, which beyond taxis include food delivery, mobile payment and financial services.

“[Selection] depends on the startup, sector and industry,” Yeo explained. “Ideally they’ve got funding and are looking to scale up their business — which means typically going into more countries or accessing a larger customer base.”

However, Velocity will not take equity/offer investment as part of the program, although there may be investment opportunities with Grab Ventures further now the line, according to Yeo.

On the investment side, the focus is also broad, too.

Yeo said that Grab ventures isn’t a dedicated VC arm. There’s no set check size per investment (nor a total fund size) but it is broadly looking to back 8-10 companies in areas that align with Grab’s business, although financial services looks like being a major focus since Grab has already built a strong business in taxis, logistics and (most recently) food delivery.

Yeo said Grab would back more startups than that target if it finds the right opportunities. He said the business will identify opportunities using its teams in the eight markets that Grab is present. While Singapore, where Grab is based, is a key focus for the business alongside Indonesia, Southeast Asia’s largest economy and the world’s fourth most-populous country, Yeo said Grab Ventures will look for investment opportunities across the Southeast Asian region.