The company didn’t get a chance to showcase all of the things it’s adding to ARKit, but did touch on the big additions, which include improved face tracking, realistic rendering, 3D object detection, persistent experiences and shared experiences.

Multiplayer is a big update for AR at Apple; the multiplayer addition will be big for gaming and Apple will certainly try to bring the functionality to other categories moving forward.

Apple’s AR bet still has a lot to prove

At Google I/O, we saw a new technology called Cloud Anchors, which matches up what a pair of smartphone users are seeing in the cloud to allow for multiplayer. 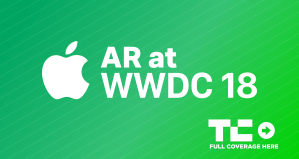 It’s not clear how Apple is doing this, but what’s interesting about Google’s approach is that Cloud Anchors allows for multiplayer across platforms so Android and iOS users can pair up easily, as well.

Apple released ARKit one year ago. The developer platform is based on technology that synthesized the relationship between the inertial sensors of Apple devices and their cameras to track their position in space. This positional tracking allows users to not only move around digital objects but fix those objects to physical places in an environment.