Following the unrelenting wave of controversy around Russian interference in the 2016 presidential election, Twitter announced new guidelines today for political advertisements on the social networking site.

The policy, which will go into effect this summer ahead of midterm elections, will look towards preventing foreign election interference by requiring organizations to self-identify and certify that they are based in the U.S., this will entail organization registered by the Federal Elections Committee to present their FEC ID, while other orgs will have to present a notarized form, the company says. 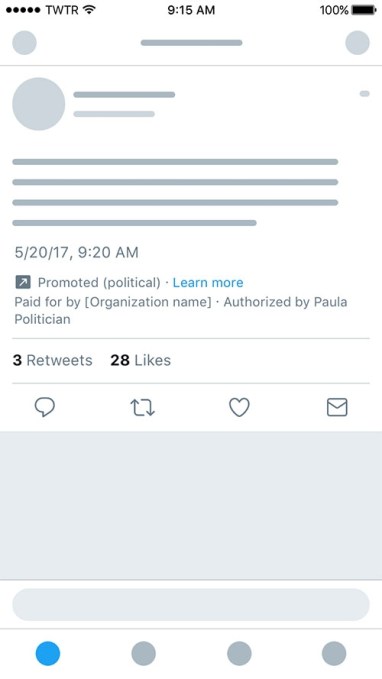 Orgs buying political ads will also have to comply with a stricter set of rules for how they present their profiles. Twitter will mandate that the account header, profile photo and organization name are consistent with how the organization presents itself online elsewhere, a policy likely designed to ensure that orgs don’t try to obfuscate their identity or present their accounts in a way that would confuse users that the account belonged to a political organization.

In a blog post, the company noted that there would also be a special type of identifying badge for promoted content from these certified advertisers in the future.

Back in April — in the midst of Facebook’s Cambridge Analytica scandal — Twitter publicly shared its support for the Honest Ads Act. This Political Campaigning Policy will be followed up by the company’s work on a unified Ads Transparency Center which the company has promised “will dramatically increase transparency for political and issue ads, providing people with significant detail on the origin of each ad.”