On the same day that Spotify’s class-action settlement with musicians gets final approval, the company is making a big push to encourage artists to participate on its streaming service – in this case, by offering them a host of educational material to help them get started. The streaming service today is launching its own video series dubbed The Game Plan, which instructs artists on how to get started using “Spotify for Artists,” and the other steps they have to take to make their music available for streaming.

In the videos, Spotify attempts to demystify the world of streaming with tips about things like when is the best time to release music, how and why to use listening data, how to upload your music, when to hire a lawyer (irony alert), and more.

The series will also feature interviews with experts, including Spotify staff, industry vets, and artists themselves, including Rick Ross, Little Dragon, Mike Posner, and Vérité. 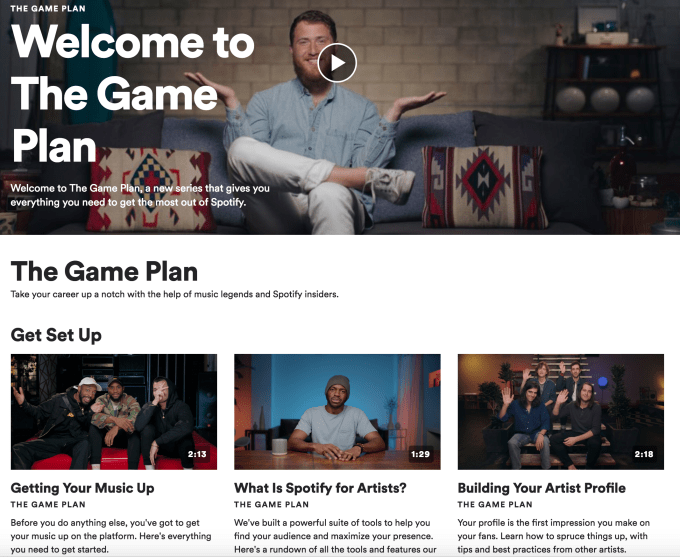 The idea is that, by sharing this knowledge with the wider community, Spotify will be able to help artists build their careers, the company explains. Naturally, it wants them to build those careers and invest in learning Spotify’s tools – not those from its rivals.

“From successful musicians, to employees who are industry experts, the Spotify community has a wealth of music industry knowledge,” said Charlie Hellman, Head of Creator Marketplace, Spotify, in a statement about the launch. “We want to equip artists at all stages of their career with that powerful knowledge, and make it as accessible as possible.”

The video series’ debut comes at a time when there’s increased competition for Spotify, including from the just now launched YouTube Music streaming service, which takes direct aim at Spotify with a similar price point and the addition of music videos, including harder-to-find performances that are often just on YouTube. Plus, Apple’s new Netflix-like streaming service is rumored to be launching next year as a bundle with Apple Music.

The Game Plan begins as a 10-part video series, but Spotify says there’s more to come in the future.