The worst thing about Spectacles is how closely tied they are to Snapchat. The proprietary circular photo and video format looks great inside Snapchat where you can tip your phone around while always staying full screen, but it gets reduced to a small circle with a big white border when you export it to your phone for sharing elsewhere. 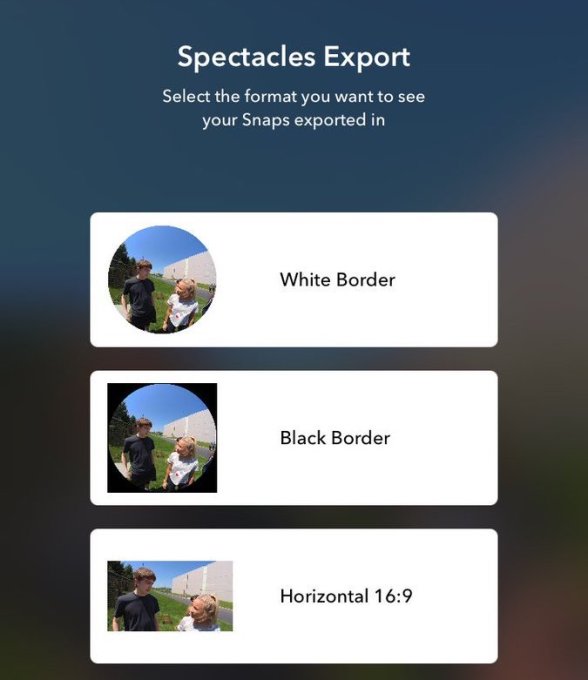 Luckily, Snapchat has started beta testing new export formats for Spectacles through the beta version of its app. This lets you choose a black border instead of a white one, but importantly, also a horizontal 16:9 rectangular format that would fit well on YouTube and other traditional video players. When asked, a Snapchat spokesperson told TechCrunch “I can confirm we’re testing it, yes.”

Allowing Spectacles to be more compatible with other services could make the v2 of its $150 photo and video-recording sunglasses much more convenient and popular. I actually ran into the Snapchat Spectacles team this weekend at the FORM Arcosanti music festival in Arizona where they were testing the new Specs and looking for ideas for their next camera. I suggested open sourcing the circular format or partnering so other apps could show it natively with the swivel effect, and Snap declined to comment about that. But now it looks like they’re embracing compatibility by just letting you ditch the proprietary format.

Breaking away from purely vertical or circular formats is also a bit of a coup for Snapchat, which has touted vertical as the media orientation of the future as that’s how we hold our phones. Many other apps, including Facebook’s Snapchat clones, adopted this idea. But with Snapchat’s growth slipping to its lowest rate ever, it may need to think about new ways to gain exposure elsewhere.

Seeing Spectacles content on other apps without ugly borders could draw attention back to Snapchat, or at least help Spectacles sell better than v1, which only sold 220,000 pairs and had to write-off hundreds of thousands more that were gathering dust in warehouses. While it makes sense why Snap might have wanted to keep the best Spectacles content viewing experience on its own app, without user growth, that’s proven a software limitation for what’s supposed to be a camera company.