Photos, not just video. No yellow ring alerting people to the camera. Underwater-capable. Classier colors with lighter lenses. Prescription options. Faster syncing. And a much slimmer frame and charging case. Snapchat fixed the biggest pain points of its Spectacles camera sunglasses with V2, which launch today for $150. The company only sold 220,000 pairs of V1, with their limited functionality, tricky exports and goofy hues. But V2 is stylish, convenient and useful enough to keep handy. They’re not revolutionary. They’re a wearable camera for everybody.

You can check out our snazzy hands-on demo video below:

The new Spectacles go on sale today in the U.S., Canada, U.K. and France, then in 13 more European countries on May 3. The $150 V2s are $20 more than the old version and only available on Snap’s app and site — no Amazon, pop-up stores or vending SnapBots. And V1 owners will get a firmware update that lets them take photos.

After two days of use, I think Spectacles V2 cross the threshold from clumsy novelty to creative tool accessible to the mainstream. And amidst user growth struggles, that’s what Snap needs right now. 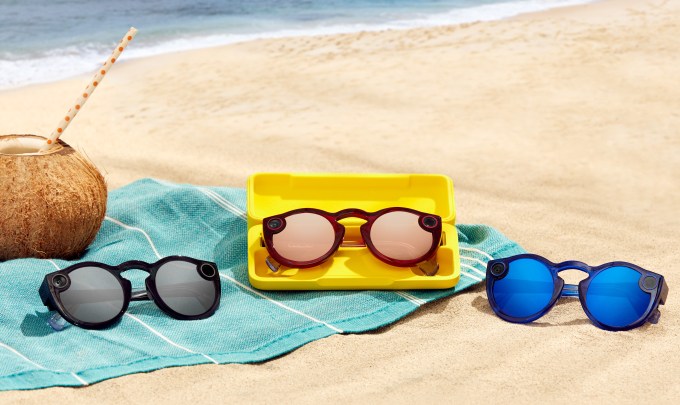 V1 was to get people comfortable

What Snap doesn’t need is a privacy scandal, and that risk is the trade-off it’s making with its more discreet Spectacles design. They still display a little circle of white lights while recording, but with the permanent yellow ring on the corner removed, you might not notice there’s a camera lens there. That could make people a little nervous and creeped out.

But the company’s VP of hardware Mark Randall tells me he thinks the true purpose of V1 was to get people comfortable wearing and being recorded by a face computer. It certainly wasn’t a consumer success, with less than half of owners using them after the first month. He said he feels pretty good about shipping 220,000 pairs. Yet Snapchat was roundly mocked for taking a $40 million write-off after making hundreds of thousands too many. Randall attributes that to having fragmented sales channels, which Snap is fixing by only selling V2 itself so it can better predict demand.

Snap did learn that users wanted to take photos, get them in less flashy coral colors, bring Spectacles to the beach, pair them quicker with better resolution exports and hear less wind noise when moving. And most importantly, they wanted something they didn’t feel weird wearing. So Randall’s team essentially scrapped the yellow warning ring, style, architecture, chipset and electronics to build a better V2 from the ground up. The result rises high above its predecessor.

The specs of Spectacles V2

Snapchat isn’t making a spectacle out of the Spectacles V2 launch. There’s no hidden vending machines with cryptic clues leading to long lines. They’re openly for sale today in Snap’s four top markets, with IE, BE, NL, SE, NO, DK, FI, DE, AT, CH, PL, ES and IT coming next week. This might make sure everyone who wants them can have them before they inevitably stop being trendy and will have to rely on their true value.

As soon as you slide them out of their tennis ball tube package, you’ll notice a higher build quality in Spectacles V2. The yellow case is about 1/3 smaller, so you could squeeze it in some pants pockets or easily throw it in a jacket or purse. The old version basically required a backpack. The charging port has also been moved to the side so it doesn’t fall out so easily. Even with the better hardware, Spectacles are supposed to have enough battery and memory to record and transfer 70 videos over a week on a normal charge, plus carry four extra charges in the case.

The Spectacles themselves feel sleeker and less like chunky plastic. They come in onyx black, ruby red and sapphire blue and you can choose between a more mirrored or natural lens color too. Users in the U.S. can order them with prescription lenses through Lensabl. Those colors are a lot more mature than the childish coral pink and teal of V1. More transparent lenses make them easier to use in lower light, so you won’t be restricted to just the sunniest days, though they’re still UVA and UVB rated. I could even get by inside to some degree, whereas I was bumping into things indoors with V1.

The box holding the hardware on the hinges is now much smaller, making them lighter and shallower overall. An extra microphone helps Spectacles reduce wind noise and balance out conversations so the wearer doesn’t sound way louder.

It’s easy to long-press for a photo or tap for 10-second video, with extra taps extending the clip up to 30 seconds. Either fires up the light ring to let people know you’re recording, but this is much more subtle than the permanent yellow ring that was there on V1. You can only add stickers and drawings after you shoot and export your Spectacles Snaps, so that means there’s no adding augmented reality face filters or dancing hot dogs to what you see first-person. 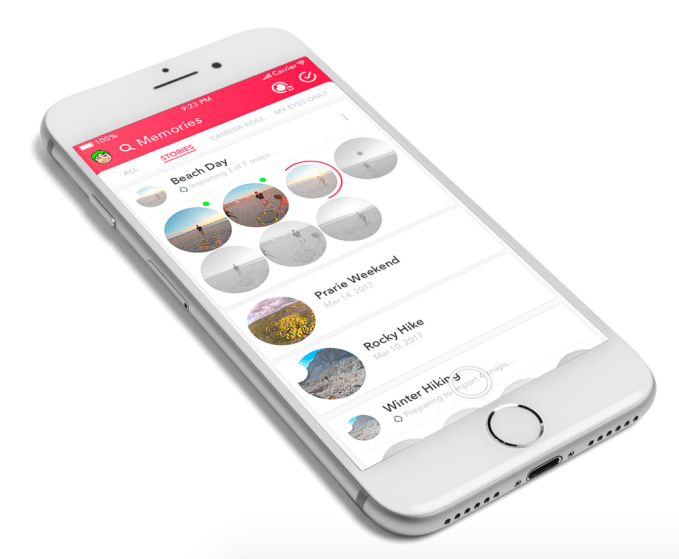 Snap Inc. actually reduced the field of vision for Spectacles from 115 to 105 degrees to cut off some of the fish-eye warping that happened to the edges of clips shot on V1. Videos now record in 1216 x 1216 pixels, while photos are 1642 x 1642. What’s fun is that Spectacles can record under water. Randall doesn’t recommend diving to 200 feet with them, but jumping in the pool or getting caught in the rain will be no problem. In fact, it can make for some pretty trippy visuals. Cheddar’s Alex Heath nailed most of these features in a scoop about V2 last month.

Syncing to your phone now just requires Bluetooth and a seven-second press of the shutter button, rather than a shoddy QR code scan. Exports always happens in HD over Specs’ internal Wi-Fi now, and transfers go four times quicker than the old process that required you to sync standard definition (low-quality) versions of videos first, then pick your favorites, then download them in HD. Randall says that led lots of people to accidentally or impatiently settle for SD content, which made Spectacles’ capture resolution seem much lower than its potential. 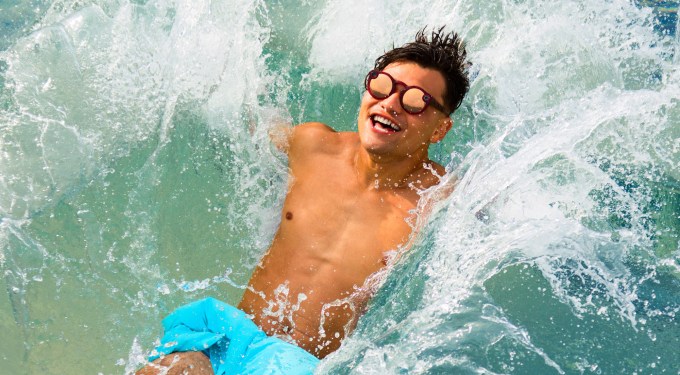 Unfortunately, Snapchat is what’s holding Spectacles back. You can only sync your Spectacles to Snapchat Memories first before exporting videos individually or as one big Story to your camera roll. That makes it a pain to share them elsewhere. If Snap wants to be a hardware giant, it can’t just build accompaniments to its own app. It needs to catch the attention of all kinds of photographers, not just those who already love Snapchat. I do wish they could share directly to Instagram, and barring that is a weighty strategy choice.

What really matters, though, is the how the incremental improvements all add up to something much more livable.

Snapchat may have finally found a way to make Spectacles carryable and wearable enough that people use them as their default sunglasses. That could lead to way more content being produced from Spectacles, which in turn could make Snapchat more interesting at a time when it’s desperate to differentiate from Instagram with something tough to copy.

Randall says Snap is just starting to reach out to professional creators, who could prove to people how fun Spectacles could be. Snap neglected them last time around and ended up with few pieces of flagship Spectacles content. This time, though, Snap will focus on showing off what Spectacles can shoot rather than just how they look on your face. It’s even going to run its own in-app ads promoting Spectacles that will let you swipe up to buy them instantly.

Snap Inc. calls itself a camera company, but beyond software, that wasn’t really true until now. It could be a half-decade before we have AR goggles for the masses, and Snap can’t wait around for that. V2 is a solid step forward, and Randall says Snap is committed to a long road of hardware releases.

Getting tons of its cash-strapped teens to buy the gadget may prove difficult again, but I at least expect V2s won’t end up dying alone in a drawer as often. These glasses aren’t going to turn around Snapchat’s business, which lost $443 million last quarter. And they probably won’t win over any Instagram loyalists. But Spectacles V2 could rekindle the interest of lapsed users while producing unique points of view to entertain those who never left. And if they don’t sell well, Snap at least is working the kinks out of its hardware iteration process that could pave the way for a killer product in the future.

The startup was always about communicating visually, and what better way than to lend someone your perspective of the world. Snap may have broken the Google Glass curse.