Google Pay got a big upgrade at Google I/O this week. At a breakout session, Google announced a series of changes to its payments platform, recently rebranded from Android Pay, including support for peer-to-peer payments in the main Google Pay app; online payments support in all browsers; the ability to see all payments in a single place, instead of just those in-store; and support for tickets and boarding passes in Google Pay’s APIs, among several other things.

Some of Google Pay’s expansions were previously announced, like its planned support for more browsers and devices, for example.

However, the company detailed a host of other features at I/O that are now rolling out across the Google Pay platform.

One notable addition is support for peer-to-peer payments which is being added to the Google Pay app in the U.S. and the U.K. 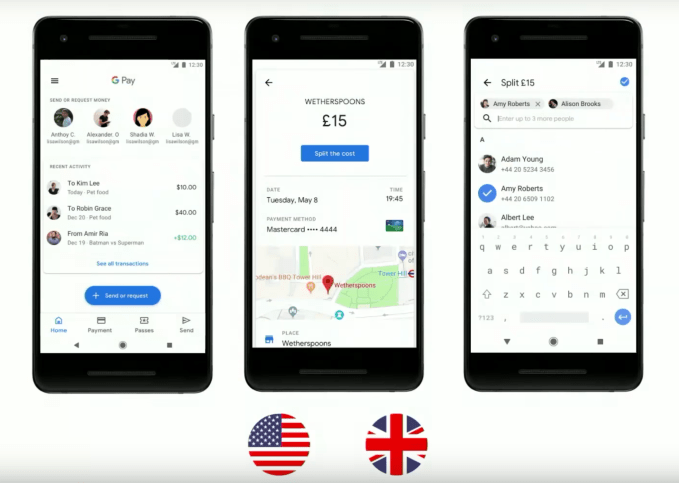 And that transaction history, along with users’ other payments, will all be consolidated into one place.

“In an upcoming update of the Google Pay app, we’re going to allow you to manage all the payment methods in your Google account – not just the payment methods that you used to pay in-store,” said Gerardo Capiel, Product Management lead at Google Pay, during the session at I/O. “And even better, we’re going to provide you with a holistic view of all your transactions – whether they be on Google apps and services, such as Play and YouTube, whether they be with third-party merchants, such as Walgreens and Uber, or whether they’re transactions you’ve made to friends and families via our peer-to-peer service,” he said.

The company also said it would allow users to send and request money, manage payment info linked to their Google accounts, and see their transaction history on the web with the Google Pay iOS app, too.

And because I/O is a developer conference, many of the new additions were in the form new and updated APIs. 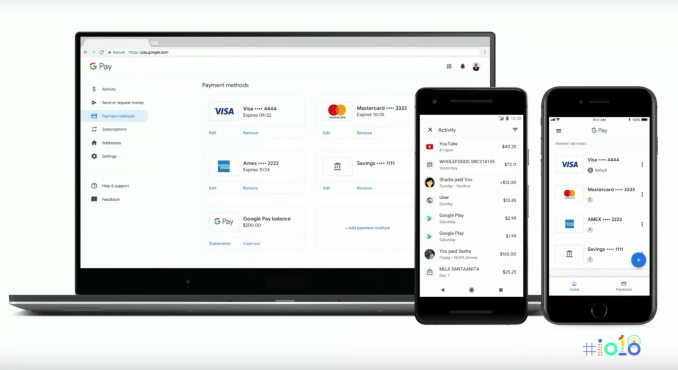 For starters, Google launched a new API for incorporating Google Pay into other third-party apps.

“Via our APIs, we’re going to enable these ready-to-pay users [who already have payment information stored with Google Pay] to also checkout quickly and easily in your own apps and websites,” Capiel said.

The benefit to those developers who add Google Pay support is an increase in conversion rates and faster monetization, he noted.

Plus, Google added support for tickets and boarding passes to the Google Pay APIs, where they joined the existing support for offers and loyalty cards.

This allows companies such as Urban Airship or DotDashPay to help business clients distribute and update their passes and tickets to Google Pay users.

“It shows an even stronger commitment on Google Pay’s part to make the digital wallet a priority,” Sean Arietta, founder and CEO of DotDashPay, told TechCrunch, following the presentation. “It also reinforces their focus on partners like DotDashPay to help build connections between consumers and brands. The fact that they are specifically highlighting a complete experience that starts with payments and ends with an NFC tap-to-identify, is really powerful. It makes the Google Pay story now complete,” he added.

Urban Airship was also touting the changes earlier this week, via a press release.

“We help businesses reinvent the customer experience by delivering the right information at the right time on any digital channel, and mobile wallets fill an increasingly critical role in that vision,” Brett Caine, CEO and president of Urban Airship, said in a statement. “Google Pay’s new support for tickets and boarding passes means customers will always have up-to-date information when they need it most – on the go.” 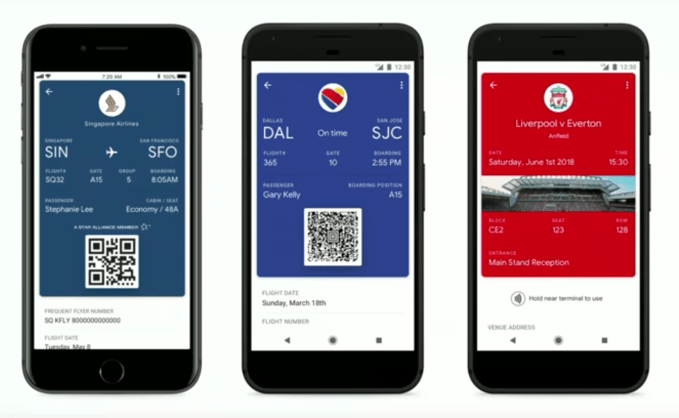 Some of Google’s early access partners on ticketing include Singapore Airlines, Eventbrite, Southwest, and FortressGB, which handles major soccer league tickets in the U.K. and elsewhere.

Soon, Google said it will launch many of the core features and the Google Pay app globally to billions of Google users worldwide.