Google today launched a new tool for teachers and their students called Tour Creator, which allows anyone to create their own VR tour using imagery from Google’s Street View or their own 360-degree photos. The new app is designed to work with Google Cardboard and Google’s existing VR “field trips” app Expeditions.

The goal with Expeditions is to let people virtually travel the world to see far off places they may never have the chance to visit in person – like Antarctica or Machu Picchu, for example. Google says that since Expeditions’ arrival in 2015, over three million students have virtually visited places around the globe.

Now, the idea is to let students and teachers themselves build their own VR experiences and stories without needing technical knowledge.

Instead, using Tour Creator, anyone can build an immersive 360-degree tour from their computer. 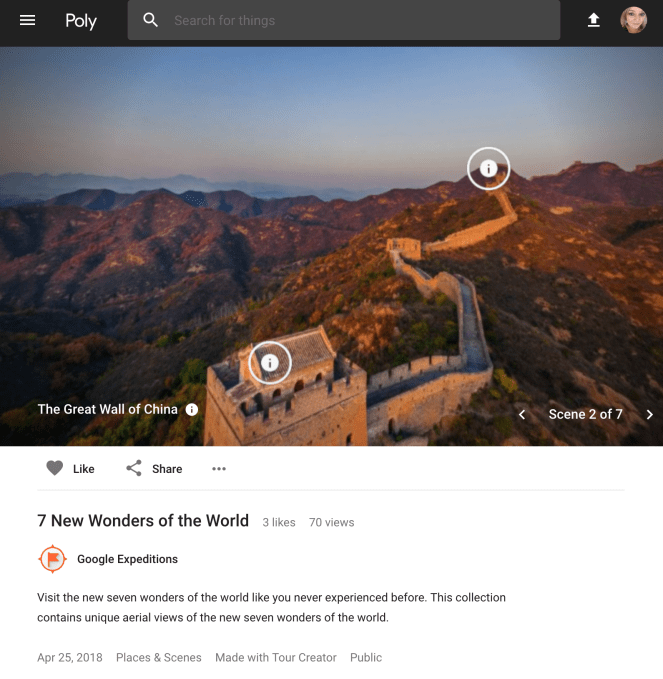 To use the service, you click to get started, give the tour a name and upload a cover photo. You can then search through Google Maps for a place or point of interest, or upload your own 360 photos to design your tour’s ‘scenes.’ These scenes can also contain buttons you click to learn more about the place in your photo.

When the tour is finished, you can choose to publish it publicly to Google’s library of 3D content, Poly, so others can experience the tour as well.

For instance, Google published a tour called the “7 New Wonders of the World” to Poly, featuring places like The Taj Mahal, Great Wall of China, the Colosseum in Rome, and others. And another user published a tour of Google’s I/O developer conference, so people can see what it’s like during Google’s big event this week.

On the tour’s page on Poly, visitors can like and share the tour to social media, or grab an embed code to put it on their own website – such as the school’s or classroom’s own website.

You can view the tours in either the web browser, as immersive photos, or you can view them in Google’s simple VR viewer, Cardboard.

Google says that, later this year, it allow users to import the tours right into the Expeditions application.