Facebook is making some updates to its Live video platform which should streamline the process of getting a stream set up and in front of the widest possible audience. The company notes in a blog post that the daily average of Live streams from verified Pages is up 1.5x this year over the past year. In addition to the updates to the Live API, Facebook has also announced that they’re testing a rewind feature for the Live video, something that has previously been unavailable.

Facebook is going to begin allowing Live videos to be “crossposted” to multiple Pages at the same time. That means if an organization or publisher has multiple Pages where a single Facebook Live video could be featured, they’ll be able to send it to all of them live as an original post without having to re-share one sent by the main account manually. The crossposting feature will allow publishers to more easily reach broader audiences without going through a bunch of unnecessary steps. It’s something publishers are already able to do with pre-recorded videos, so porting the feature over to Facebook Live makes a good deal of sense. 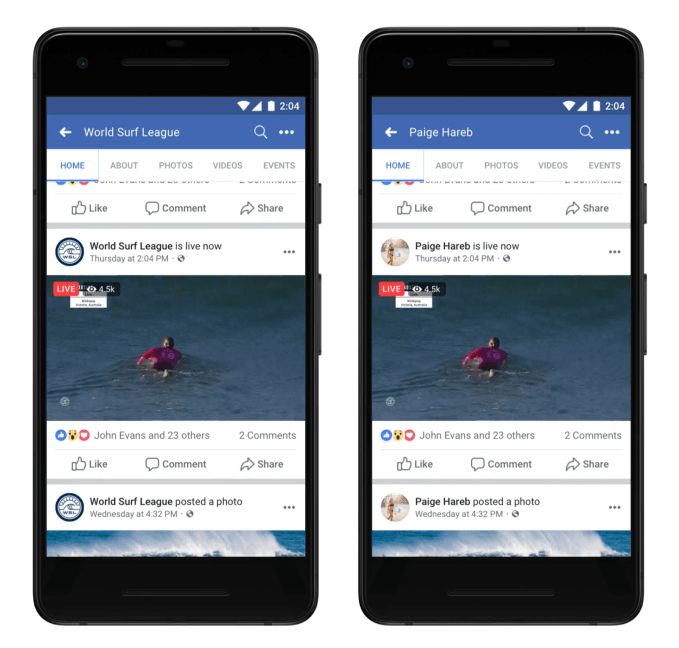 Another feature that should make things easier for creators and publishers on the platform is what’s called a persistent stream key. These keys are a part of the streaming setup process and have previously been tied to the each new streaming session.

Now, what has made this really frustrating for users has been coordinating this when their Facebook Live stream has a problem and they have to start a new session, a process which has — in the past — automatically created a new stream key which has then had to be copied and sent over to production teams.

With this new persistent option, these production teams will know the stream key tied to an account in advance and won’t have to worry about coordinating this step in the process should anything go awry.

One particularly exciting (yet exceedingly basic) feature that has been sorely missing from Facebook Live has been the ability to rewind live footage. A clear highlight of the medium is the ability to watch something as it unfolds in real time; consumers being able to immediately look back at things that may have surprised them is a key functionality. It’s been something YouTube live viewers have been able to do for a while that has always felt absent from Facebook.

Facebook Rewind is being tested currently and the company hopes to roll it out for all users soon. Persistent stream keys and crossposting functionality are rolling out today.