The National Security Agency revealed a huge increase in the amount of call metadata collected, from about 151 million call records in 2016 to more than 530 million last year — despite having fewer targets. But officials say nothing is different about the year but the numbers.

A transparency report issued by the Office of the Director of National Intelligence shows numerous other fluctuations in the volume of surveillance conducted. Foreign surveillance-related, warrantless Section 702 content queries involving U.S. persons jumped from 5,288 to 7,512, for instance, and more citizens were “unmasked,” indicating a general increase in quantity.

On the other hand, the number of more invasive pen register/trace and tap orders dropped by nearly half, to 33, with even fewer targets — far less than the peak in 2014, when 135 orders targeted 516 people.

The biggest increase by far is the number of “call detail records” collected from service providers. Although the number of targets actually decreased from the previous year, from 42 to 40, the number of call records jumped from 151 million to 534 million, and search terms from 22,360 to 31,196. 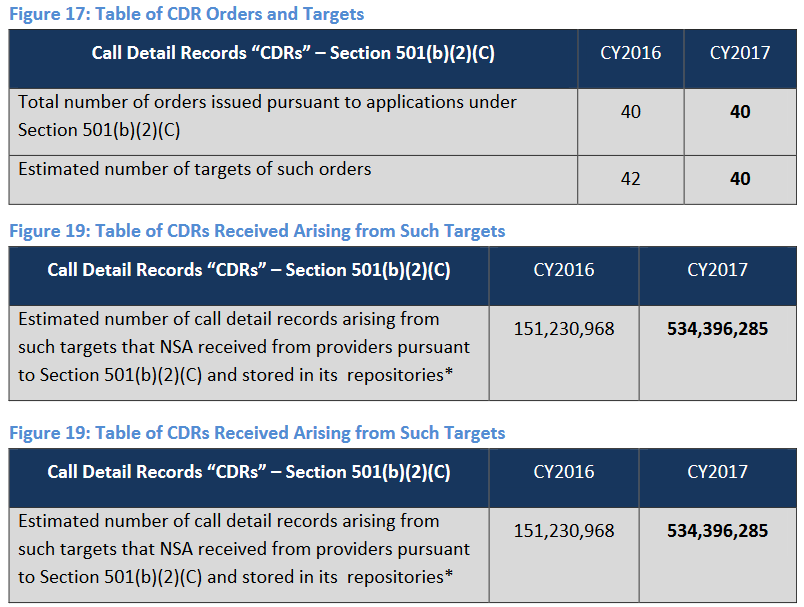 Call detail records are things like which numbers were called and when, the duration of the call and so on — metadata, no content. But metadata can be just as revealing as content, since it can, for example, place a person near the scene of a crime, or establish that two people were connected even if the conversation they had was benign.

What do these increases mean? It’s hard to say. A spokesperson for the ODNI told Reuters that the government “has not altered the manner in which it uses its authority to obtain call detail records,” and that they “expect this number to fluctuate from year to year.” So according to them, it’s just a matter of quantity.

Because one target can yield hundreds or thousands of incidental sub-targets — people connected to the target whose call records will be requested and stored — it’s possible that 2017’s targets just had fatter, longer contact lists and deeper networks than 2016’s. Needless to say this explanation is unsatisfying.

Although the NSA’s surveillance apparatus was dealt a check with the 2013 Snowden leaks and subsequent half-hearted crackdowns by lawmakers, it clearly is getting back into its stride.