Snapchat’s redesign was a disaster. It cratered ad views and revenue and led Snapchat’s user count to actually shrink in March. That’s why CEO Evan Spiegel just announced a big reversal of the redesign’s worst part:

We learned that combining watching Stories and communicating with friends into the same place made it harder to optimize for both competing behaviors. We are currently rolling out an update to address this by sorting communication by recency and moving Stories from friends to the right side of the application, while maintaining the structural changes we have made around separating friends from creators and sorting friends’ Stories by relationships.

Spiegel relayed that user behavior on iOS is starting to stabilize, but “performance regressions” on Android related to the redesign have contributed to the app’s overall growth troubles.

Snap had previously tested this change, and also tried creating separate tabs for Chat and chronologically sorted Stories inside the Friends section on the left side of the app. Below you can see the new version of Discover, which shows preview tiles of friends’ Stories up top, sorted by who you interact with most. It’s reminiscent of Instagram Stories, which also uses a horizontal scrolling row of Stories. 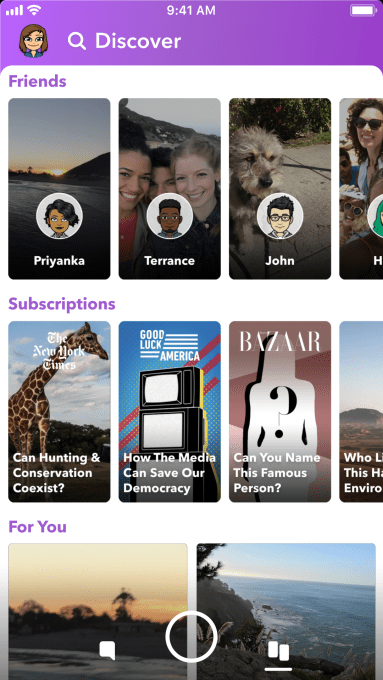 I think this design is still a mess. It takes Snapchat’s pioneering Stories product and buries it amongst all the professional content inside Discover. Essentially, Snapchat has taken its redesign philosophy too far. Originally it pulled brands and social media stars out of the Stories list and put them in Discover because it didn’t want your friends’ Stories to have to compete with the pros. But now those Stories and the pro content are all crammed into one screen.

What Snap needs to do is create tabs for relevancy sorted Stories and chronologically sorted messages in the friends side of the app, and keep all professional content in the Discover section, but with the option to subscribe to your favorite creators to move them over to the Friends’ story lists.

Spiegel says he expects users metrics to stabilize as people get used to the redesign. But Snapchat doesn’t have time to be patient. Its losses are mounting and the growth of WhatsApp Status is explosive. That Facebook-owned Stories clone now has 450 million daily users. Snapchat needs to stuff its pride and philosophy and drill down into what users actually want. Spiegel has always gone by his gut, but this awful earnings report should give him indigestion.