Lost device finder Tile today is making good on its previously announced partnership with Comcast by introducing a way for Comcast Xfinity customers to locate their Tiles using Comcast’s TV remote, the Xfinity X1 Voice Remote. This is also the first video and voice partnership with Tile, which has been steadily expanding its integrations with third parties, including most recently Bose, Samsonite, Boosted Boards, and others.

The company has said its goal is to “blanket the world” in smart location through its partnerships, which have also included those with access points and airport Wi-Fi.

With the Comcast partnership in particular, Tile users can speak into their voice remote and ask for the location of one of their Tiles – the small dongles that can be attached to things like bags, purses, keys, wallets and more.

To use this feature, you have to say “Xfinity Home,” (yes, this is how you talk to your remote), “where are my keys?” or “Sam’s backpack?” or whatever other label you’ve assigned your Tile device.

The last known location and the address of the missing Tile will then appear on the TV screen.

To use the feature, Xfinity customers will have to download the Xfinity Home app on their iOS or Android device to add their Tiles following the instructions in the app. 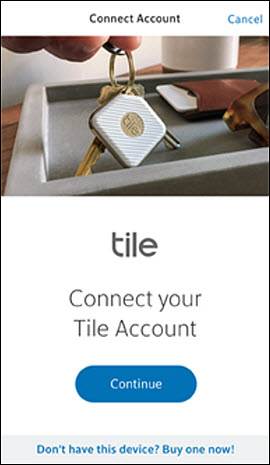 The companies say that later this year the feature will become available to all Xfinity Internet customers, too.

Though there are a number of lost item finders on the market, Tile has become one of the biggest in the space, having sold 13 million Tiles to date, as of this January. It hasn’t provided an update on revenue in recent months, but said it had earned $100 million in 2016.

One the company’s bigger efforts lately has been on expanding its network. Tiles work beyond their Bluetooth connections by creating a community where all users with the Tile app on their phone can share information back to the network about nearby Tiles, including those from other users. That means it’s to Tile’s advantage to integrate its technology in as many places and products as possible – as this brings on more customers, and more places where nearby Tiles can be found.

Comcast was one of several new partnerships announced this year, but it was one of the bigger names. The other notable brand working with Tile now is Bose, whose SoundSport Wireless and QuietControl 30 headphones will ship with Tile’s technology embedded inside.