Analysts have long-warned of a growth crunch in China’s smartphone space, and it’s looking like that’s very much the case right now.

China’s smartphone growth has been the feel-good story for domestic OEMs who have clocked impressive figures as the billion-plus population has rushed online via mobile devices. However, the market reached saturation point in 2017 — when sales stopped growing for the first time — and the first quarter of this year is already showing savage results.

In a report released today, Canalys claimed that shipments across the industry fell by 21 percent year-on-year in Q1.

The total number of mobile devices shipped in China dropped below the 100 million mark in a quarter for the first time since late 2013, the firm added.

“Eight of the top 10 smartphone vendors were hit by annual declines, with Gionee, Meizu and Samsung shrinking to less than half of their respective Q1 2017 numbers,” the report read. 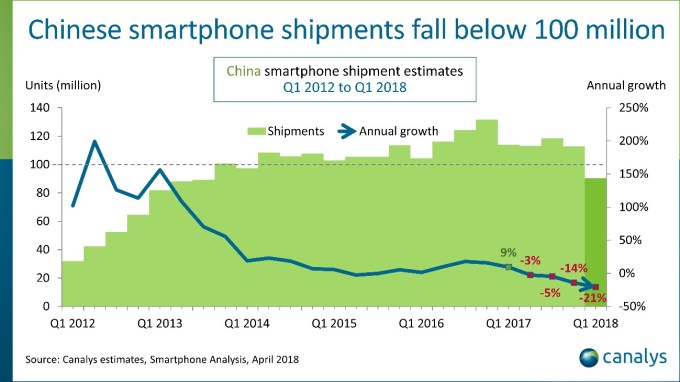 Of the field, only Xiaomi — the firm tipped for an IPO at a $100 billion valuation — was able to post positive momentum as its numbers grew by 37 percent to reach 12 million. That was enough to see it overtake Apple into fourth place, but Xiaomi numbers are still heavily reliant on its $150 Redmi range, which isn’t as lucrative as its higher-end products.

Huawei, Oppo and Vivo led the market. Somewhat incredibly, those three firms plus Xiaomi now account for a very dominant 73 percent of all shipments, which Canalys believes is bad for consumers and smartphone aficionados in China.

“The level of competition has forced every vendor to imitate the others’ product portfolios and go-to-market strategies,” analyst Mo Jia said in a statement. “While Huawei, Oppo, Vivo and Xiaomi must contend with a shrinking Chinese market, they can take comfort from the fact that it will continue to consolidate, and that their size will help them last longer than other smaller players.” 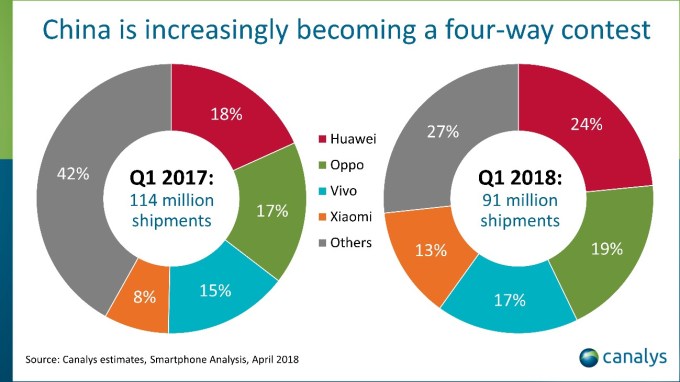 There might be a bright spark coming soon. Canalys anticipates growth in the second quarter as Oppo, Vivo and Huawei trot out new flagship devices. But China’s once-booming industry is now having to contend with the same issue as the U.S.: consumers don’t upgrade their phone as frequently as carriers would like.