China’s smartphone market is no longer growing after it witnessed its first annual decline in shipments during 2017, according to new figures released today.

The writing was on the wall with a market decline first noted in Q2 but this is the first time a drop has been sustained over a twelve-month period. That’s according to data from analyst firm Canalys which reported that total smartphone shipments dipped four percent year-on-year to reach 459 million units in 2017. In particular, the numbers in Q4 were down 14 percent on one year previous with 113 million units shipped.

Despite evidence of buyer saturation, Huawei continued its impressive growth spurt with 24 million shipments in the final quarter of 2017, growing its numbers nine percent above the market.

Sister companies Oppo and Vivo have exploded on to the global stage with strong sales in emerging markets in Asia, but, in China, their numbers fell 16 percent and 7 percent, respectively, with 19 million and 17 million shipments, according to Canalys.

Finally, the launch of the iPhone X and iPhone 8 helped Apple pip Xiaomi to fourth place with 13 million shipments in Q4 2017. 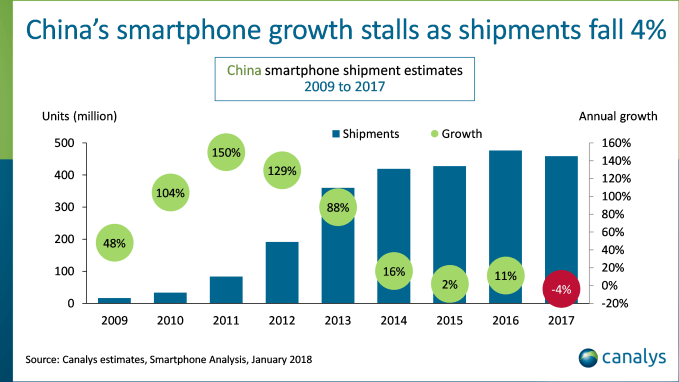 Slowing growth at home has prompted Chinese phone brands to look overseas, with many turning to India where they have long beaten out the local competition and nascent markets like Indonesia, which could grow significantly.

Xiaomi, in particular, which beat Samsung to the top spot in India in Q4, has also made moves into Spain, Mexico, Russia and parts of Africa, too.

The U.S. has proven a tougher market to crack. Xiaomi has sold accessories there for some time, but it is yet to make the leap of smartphones despite many public declarations of intent.

Those that have been more aggressive have met tough pushback. AT&T, the second-largest U.S. carrier, canceled plans to carry the Huawei Mate 10 Pro following reports of pressure from the government. There are also rumors that Verizon is facing pressure over its plan to stock the device, which has already seen its launch pushed back from an original summer timeline.

Huawei instead plans to sell the Mate 10 Pro unlocked and it recruited Wonder Woman actress Gal Gadot to front its campaign as its “Chief Experience Officer.” But carrier deals remain a key way to reach users without an upfront price that can near the quadruple digits. Huawei has distribution with key retailers like Best Buy and Amazon, but the company ultimately won’t penetrate the market the way it hopes without that extra push.