Last fall, Roku launched its own channel to provide its cord-cutting customers with access to free movies and TV shows in a single destination. Today, it’s adding live news to its channel, too.

In partnership with ABC News and others, The Roku Channel will now feature live news streams and linear news programming alongside its entertainment options.

ABC News will be the flagship partner for the launch, as Roku will be the exclusive over-the-top home for its new live and linear streaming network, ABC News Live. However, The Roku Channel will also include live and linear news from Cheddar, PeopleTV and others.

Since its launch, The Roku Channel has become one of the top 15 on Roku’s platform, and the No. 3 ad-supported channel. 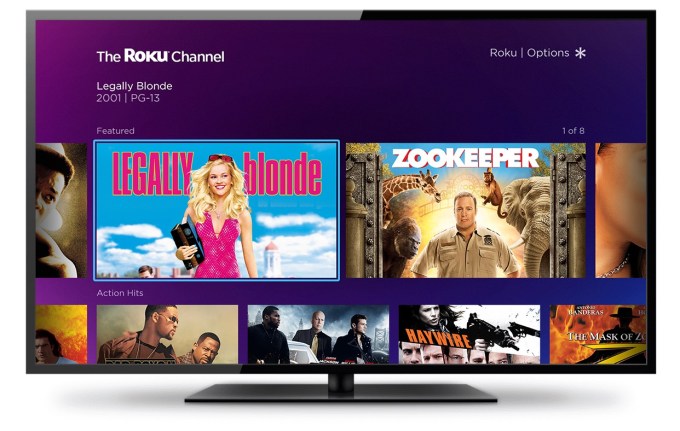 One of Roku’s goals in offering its own channels is to help users find content that would otherwise be distributed across a number of places on its platform. Roku had already done something similar with its “4K Spotlight” channel launched in 2015, as well as with the “Roku Recommends” channel’s curated selection, launched in 2011.

With The Roku Channel, the goal was to organize the best free content you could find on Roku. And with the addition of news, Roku is once again aggregating partners’ streams in one easy-to-find destination. 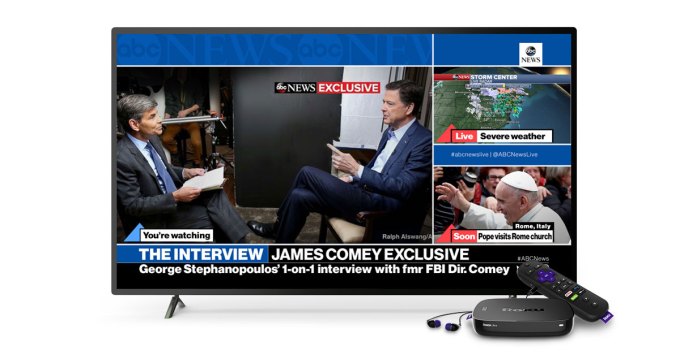 Of course, The Roku Channel isn’t the only way to watch news on Roku — most major news organizations offer their own channel app.

But many of the news experiences available today are based on clips from the linear TV world, instead of a digital equivalent to the 24/7 news channels found on traditional cable television. That means that instead of being able to “flip on the news” as you can on TV, watching news on Roku has been more of a “choose your own adventure”-style experience of browsing clips to find something you wanted to view, explains Roku’s VP of Programming, Rob Holmes.

“We recognized that users are looking for easy ways to find high-quality content and to engage in a lean-back experience,” he says, of bringing streaming news to Roku.

Roku and ABC had been in discussions about building out a live news experience for more than a year — even before the company launched The Roku Channel, in fact. But with its arrival, it seemed like the best place to introduce the streaming news experience. 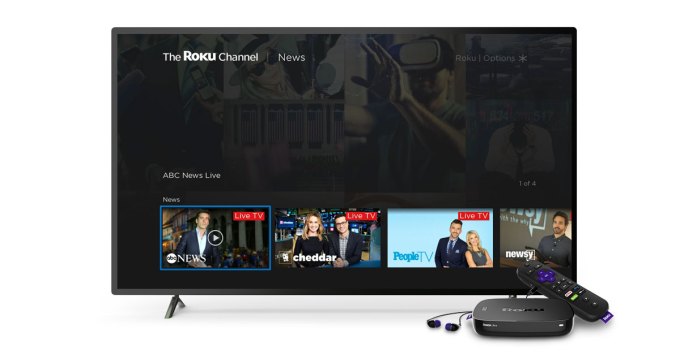 “Our ambition here is not to re-create cable, but to reinvent what a 24/7 news channel looks like for [the nonlinear audience],”says Colby Smith, VP of ABC News Digital. “We’ve spent the last three years or so really building up our live operation — experimenting with thousands of live streams and production formats. Of course, we consider ourselves expert live producers — ABC News has been around for many decades. But we’ve also analyzed mountains of data through that experimentation to really dive in and understand what works on each screen size,” he continues.

“And what we’ve learned more than anything in non-cable environments is that viewers want to be shown what’s happening in the world, not told what’s happening,” Smith says.

ABC’s live stream will focus on the most interesting thing that’s happening around the globe in that moment, he says. The content, however, may come from a number of sources — ABC News’ own boots-on-the-ground reporting; its domestic or international partners’ streams; or even social media streams cleared through places like Facebook or YouTube.

ABC News Live, like The Roku Channel itself, will be free and ad-supported, but Roku and ABC aren’t discussing the revenue share or how the ads are sold. (It’s a bit unclear, then, to what extent this is a new revenue stream for Roku itself, versus just another means to woo potential customers to the Roku platform.)

Roku is the only streaming platform to host ABC News Live outside of other ABC News properties, including its own Roku channel and the ABC News website and apps.

ABC says it partnered with Roku on the launch because it wanted to work with a distributor that understood the non-linear TV audience.

“There so many distributors that just want to re-create a TV Everywhere experience, or just want to plop in cable into a digital environment for cord cutters,” says Smith. “That’s not at the heart of what we believe in.”

The channel itself will offer some scheduled programming — including its own take on an hourly news update, in addition to the live stream. It may also cut to its post-White House press briefing coverage at times, and it may stream its Emmy-winning ABC News featured stories during breaks from live coverage.

In addition to ABC News Live, The Roku Channel will also integrate Cheddar’s linear news feed, which has also newly become available on Hulu and YouTube TV. And it will include the ad-supported pop culture and celebrity news network, PeopleTV, from People and Entertainment Weekly.

The Roku Channel will also get a slight makeover alongside the launch of news. It will now organize content into thematic “Collections” and “Continue Watching.”

The updates will launch in May with the release of Roku OS 8.1, which will add multicast private listening through the Roku mobile app. That means up to four people on iOS and Android can listen to the TV through their headphones, instead of through the TV set itself.