Cheddar isn’t done making deals with the over-the-top streaming TV providers. Only yesterday, news came out that Cheddar was the first digital-only network to launch a channel on YouTube’s streaming TV service, YouTube TV. Today, the company is announcing a similar deal with Hulu, which will bring its programming to Hulu’s more than 17 million subscribers.

The on-air channel will launch to Live TV viewers later this month. 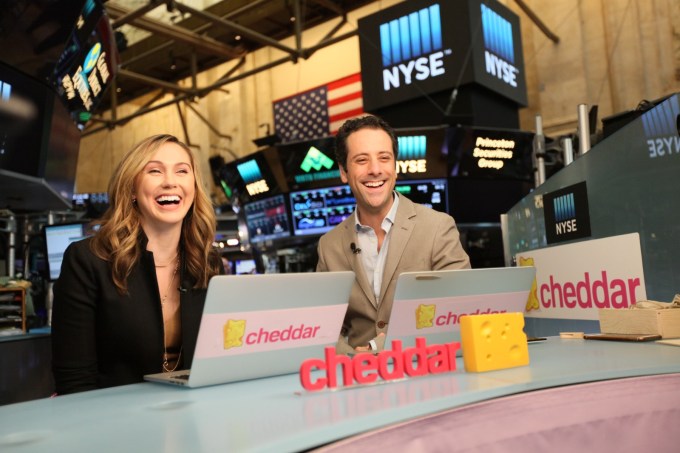 However, YouTube TV is catering to a younger demographic who may be more familiar with the Cheddar brand, and more attracted to digital networks in general, rather than their cable TV counterparts. That fits well with Cheddar’s own viewership demographics — 1 in 5 millennials (ages 18 through 24) know of Cheddar, and they’re “decades” younger than those who watch traditional news networks, the company notes.

For Hulu, the new addition means it’s gaining a network that could make its service more appealing to “cord nevers” — the (often young) group of consumers who are choosing never to sign up for a pay TV subscription in the first place. These users still want access to TV news, though, says Hulu.

“Our live TV viewers watched more than 24 million hours of news in the first quarter of 2018, so clearly they are hungry for news content,” said Tim Connolly, SVP, Head of Partnerships and Distribution at Hulu, in a statement about the deal with Cheddar. “We’re happy to partner with a post-cable millennial-focused network like Cheddar to pack even more value into our live offering and give our younger viewers access to a greater, more diverse selection of live news options,” he said.

Cheddar has shifted away from consumer-facing subscriptions and is now an ad-supported network. Around 95 percent of revenue comes from ads and sponsorships. The company may be sharing a portion of ad revenue with streamers as part of these deals.

Live TV services are only one way Cheddar is being distributed. The company has a number of deals across the web and mobile devices, including on Sling TV, YouTube TV, Philo, Comcast X1, Altice One, Pluto, Molotov in Europe, Twitter, Facebook, Twitch, Amazon and elsewhere. This month, it will also launch a show on Snapchat. Thanks to this wide distribution on tech platforms, Cheddar is seeing hundreds of thousands of daily live viewers and hundreds of millions of video views a month on social platforms.