Twitter has now followed Apple’s lead in changing its pistol emoji to a harmless, bright green water gun. And in doing so, the company that has struggled to handle the abuse, hate speech and harassment taking place across its platform, has removed one of the means for online abusers to troll their victims.

The change is one of several rolling out now in Twitter’s emoji update, Twemoji 2.6, which impacts Twitter users on the web, mobile web and on Tweetdeck. 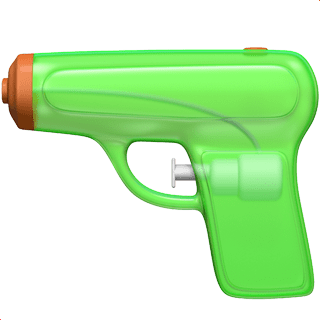 The decision to replace an emoji of a weapon to a child’s toy was seen as a political statement when Apple in 2016 rolled out its own water gun emoji in iOS 10. The company had also argued against the addition of a rifle emoji, ultimately leading to the Unicode’s decision to remove the gun from its list of new emoji candidates that same year.

With these moves, Apple was effectively telling people that a gun didn’t have a place in the pictorial language people commonly use when messaging on mobile devices.

These sorts of changes matter because of emoji’s ability to influence culture and its function as a globally understood form of communication. That’s why so much attention is given to those emoji updates that go beyond the cosmetic — like updates that offer better representations of human skin tones, show different types of family groupings or relationships or give various professions — like a police officer or a scientist — both male and female versions, for example.

In the case of the water pistol, Apple set a certain standard that others in the industry have since followed.

Samsung also later replaced its gun with a water gun, as did WhatsApp. Google, meanwhile, didn’t follow Apple’s lead, saying that it believed in cross-platform communication. Many others left their realistic gun emojis alone, too, including Microsoft.

“The main problem with the different appearances of the pistol emoji has been the potential for confusion when one platform displays this as an innocuous toy, and another shows the same emoji as a weapon. This was particularly an issue in 2016 when Apple changed the pistol emoji out of step with every single other vendor at the time,” notes Jeremy Burge, Emojipedia’s founder and vice chair on the Unicode Emoji Subcommittee. “Now we’re seeing multiple vendors all changing to a water pistol image all in a similar timeframe with Samsung and Twitter both changing their design this year,” he says.

On Twitter, however, the updated gun emoji very much comes across as a message about where the company stands (or aims to stand) on abuse and violence. A gun — as opposed to a water gun — can be far more frightening when accompanied with a threat of violence in a tweet.

The change also arrives at a time when Twitter is trying — some would say unsuccessfully — to better manage the bad behavior that takes place on its platform. Most recently, it decided to publicize its rules around abuse to see if people would then choose to follow them. It has also updated its guidelines and policies for how it would handle online abusers, to mixed results.

In addition, the change feels even more like a political message than the Apple emoji update did, given its timing — in the wake of Parkland, the youth-led #NeverAgain movement, the YouTube shooting and the increased focus on the NRA’s contributions to politicians.

Twitter has confirmed the change in an email with TechCrunch, saying the decision was made for “consistency” with the others that have changed.

However, Emojipedia shows that not all companies have updated to the water gun. Google, Microsoft, Facebook, Messenger, LG, HTC, EmojiOne, emojidex and Mozilla still offer a realistic pistol, not the green toy.

But Apple and Samsung perhaps hold more weight when it comes to where things are headed.

“I know some users object to what they see as censorship on their emoji keyboard, but I can certainly see why companies today might want to ensure that they aren’t showing a weapon where iPhone and Samsung Galaxy users now have a toy gun,” Burge says. “It’s pretty much the opposite to the issue with Apple being out of step with other vendors in 2016.” 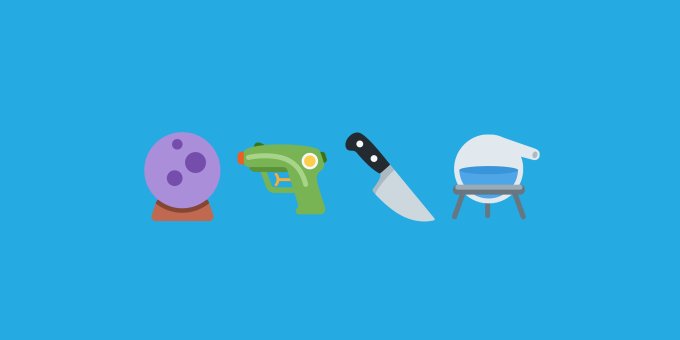 The gun was the most notable change in Twemoji 2.6, but Emojipedia notes that other emoji have been updated as well, including the kitchen knife (which now looks like more of a vegetable slicer than a weapon for stabbing), the Crystal Ball, the Alembic (a glass vessel with water) and the Magnifying Glass, with more minor tweaks to the Coat, Eyes and emoji faces with horns.