Shareholders seemed to have incredibly low expectations of Facebook CEO Mark Zuckerberg’s ability to handle a Senate testimony, because Facebook stock climbed 4.5 percent Tuesday with the bulk of the gains coming during his televised testimony.

Though the markets closed nearly an hour ago, Zuckerberg is still being peppered by Senators in an hours-long testimony session where the group is aiming to hear more from the company’s CEO and founder about data protection in the wake of the Cambridge Analytica controversy.

While there have been tough questions from several senators, rhetoric regarding government regulation of internet companies like Facebook was not overly pronounced in opening statements, though several Senators did directly address it in their questioning.

While Zuckerberg’s apology tour of the Capitol building seems to have largely been devoted to rehashing the major changes they’ve announced in recent days and weeks, he did reveal that the number of Facebook accounts with ties to Russian Intelligence could be in the “tens of thousands,” an admission that greatly exceeds the several hundred that Facebook had previously disclosed.

Facebook’s gains Tuesday brought the company’s share price to close above $165, a number it has not closed above in nearly three weeks. Facebook is still far below the $185 share price it was above before Cambridge Analytica reports were shared from a number of publications in mid-March. 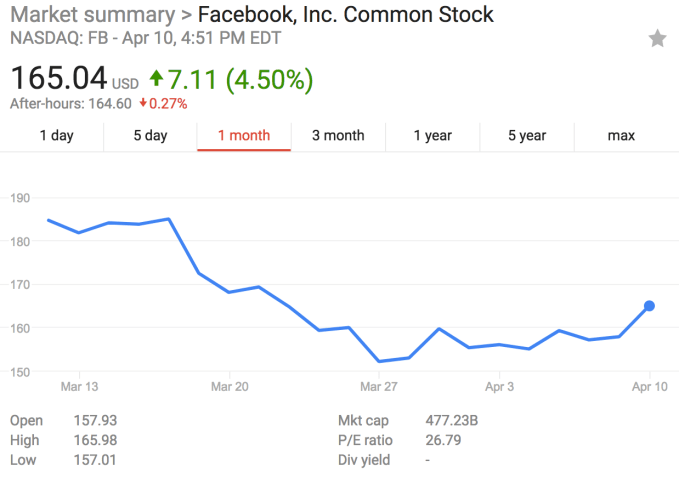