Could it be that the scourge of 3D film is coming to an end? The box office contribution of 3D showings dropped in 2017 to 12 percent of the U.S. and Canada’s $11.1 billion total take, its lowest point essentially since 3D movies became a thing.

The numbers come straight from the horse’s mouth: an MPAA report (PDF) on ticket sales. It’s a mixed bag altogether, for the most part positive: people are still watching lots of movies, and they’re paying to go to theaters all over the world. Global box office hit a new record ($40.6 billion) even if the U.S. and Canada dropped 2 percent.

The decline of 3D, however, is really only noted in the following chart: 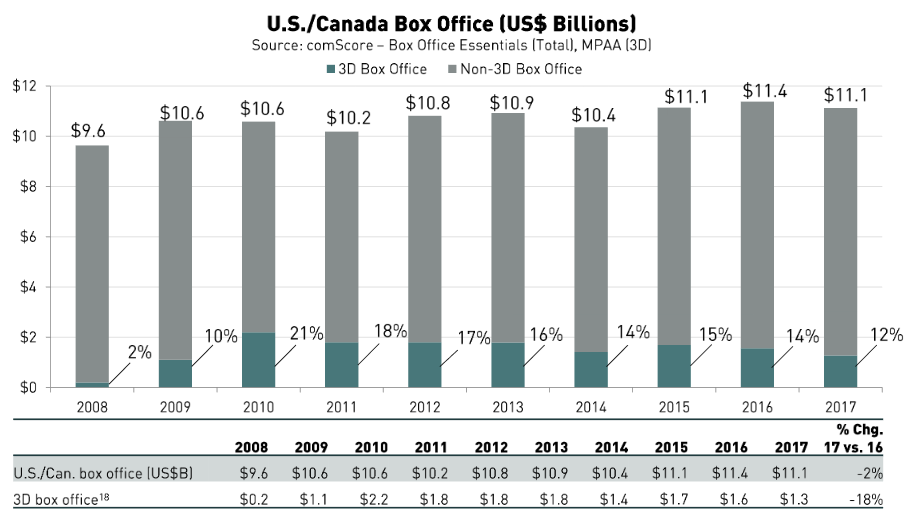 You can see that at 12 percent of total box office, it’s the lowest percentage and absolute amount of ticket sales for 3D movies since 2009. The peak, in 2010, was largely due to Avatar, surely the most impressive 3D film and certainly the highest grossing, even if it did use Papyrus for its title font. It’s been largely downhill since then.

And why not? 3D is expensive, uncomfortable, degrades the quality of the picture, rarely adds anything to a film and, in fact, is often bolted on after the fact in post-production. (CG films, more easily converted and aimed at a younger crowd, are an exception.)

3D TVs failed, 3D gaming failed, VR’s special take on 3D is at the very least failing to succeed — so why not 3D film?

As an embellishment on moviemaking, it’s largely bankrupt of possibility, but the idea of creating a “premium” tier of moviegoing (the sort-of-stealth motive of 3D) is far from a bad idea. People will pay extra for things like big seats, 21+ showings where you can drink, good food and so on. And as MoviePass has shown, they’ll also pay for theaters as a service — although whether the company can pull that off at the current price point is a matter of some debate.

Even if Avatar 2 were to give the 3D box office a shot in the arm, it’s unlikely that the enterprise is considered worth saving when other, fresher opportunities to put butts in seats are in the offing. Here’s hoping 2018 or 2019 will be the last time you have to specify 2D when buying tickets.