Gwynnie Bee, a subscription service offering women an “unlimited closet” of clothing for rent, believes its model is one that can be expanded to traditional retailers, too. And today, it’s officially taking the wraps off a new technology platform which will allow retailers to offer a subscription clothing rental business alongside their existing channels. The platform is cleverly dubbed “CaaStle” – the name referencing “Clothing as a Service” (itself a play on subscription-as-a-service, or SaaS). It offers retailers a turnkey solution where all aspects of the subscription business – including the website, the databases, the logistics, the cleaning, returns, packing, shipping, and more – are handled.

CaaStle is actually something founder and CEO Christine Hunsicker had envisioned from the beginning, she says.

“When we first started the company, this was the goal – build the platform and the technology that would power a new economy for retail,” Hunsicker says. “From day one, we were building this, but we had to prove the model would work. We also had to have a way to prove that we could do it right – that we could ship boxes and process inventory – so we brought up Gwynnie Bee as our first service on top of CaaStle,” she explains.

Founded in 2011, Gwynnie Bee is a clothing rental service that originally served the plus-sized women’s clothing market, but expanded at the end of January 2018 to include sizes 0 through 8, as well. (It does so in a different way than most, however – it only adds the smaller sizes for items that are available from 0 through 24, as a means of encouraging brands to make more plus-sized apparel.)

The company plays in a larger market of clothing rental businesses, several of which are on the upswing. Rent the Runway, for example, just raised $20 million from Alibaba’s Jack Ma and Joe Tsai; Le Tote just became the first U.S. subscription service to enter China.

Gwynnie Bee doesn’t share its subscriber numbers or other metrics publicly, but says it’s doing better in terms of that ideal 3:1 ratio for SaaS companies – the Customer Lifetime Value to Customer Acquisition Ratio, that is – which is a crucial measure of a successful subscription business. 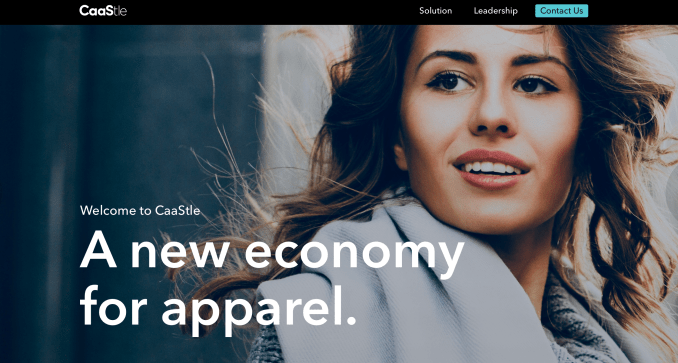 With CaaStle, retailers simply send Gwynnie Bee their inventory, and the rest is handled.

Gwynnie Bee builds the front-end site under the retailer’s name. It handle all the logistics – the processing of returns, the cleaning, the inspecting, the restocking, the pick-pack-ship – all out of its own multi-tenant warehouses in Columbus and Phoenix.

The retailers pay Gwynnie Bee on a per customer basis when they use CaaStle, which can be customized for their specific goals.

There are basic, premium and enterprise tiers available, with optional add-ons that offer things like fit and size recommendations, personalization technology, algorithms that price the clothes the customer wants to keep, and more. CaaStle collects the customers’ credit card transactions, so it pays out to the retailer, based on their package.

In some cases, the retailers are looking to acquire new customers. Other times, they may want current customers to spend more money. Or they may be looking for inventory monetization.

On that latter front, the retailer could use CaaStle as an alternative to moving excess inventory to an outlet, for example. Or if they’re looking for new customers, they’ll put their best clothing on subscription instead. 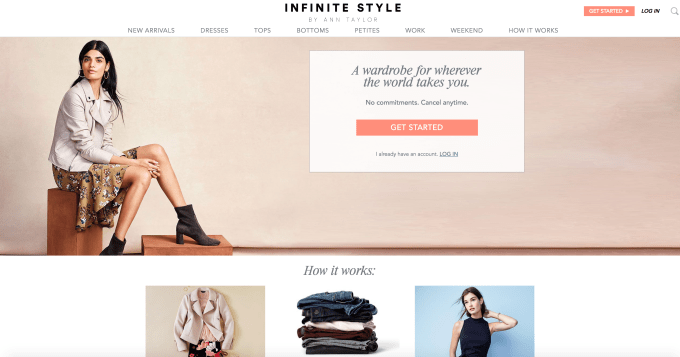 “But the best stuff is not the top sellers,” Hunsicker points out. “I think this is probably one of the most interesting pieces of this model – what sells well tends to not rent well, because what sells well are the basics, the staple items…what rents well is all of the fashion,” she says. “What people actually want to rent is an amazing complement to traditional retail, which is why we’re so excited about it.”

That is, people often rent the trendy, fashionable items they didn’t want to buy because they knew they wouldn’t wear it more than a couple of times.

CaaStle has already been quietly powering the subscription clothing rental businesses from Ann Taylor (Infinite Style) and New York & Company (NY&C Closet) since last year – well ahead of this week’s public unveiling during a keynote at the Shoptalk conference.

While Hunsicker can’t share their specific metrics, she could speak to the three businesses – including Gwynnie Bee – in aggregate. “What we’ve seen is a really large increase in new customers – a substantial portion of the people signing up for the services are new-to-file. We’ve also seen a meaningful share of wallet increase, and a really good operating profit,” she notes. “If you look across all three tenants…we’re seeing a 50-plus percent new-to-file, a 60 percent share-of-wallet increase, and 25 to 45 percent operating margin on the business.”

The company has several more retailers coming on board in 2018, including expansions beyond women’s apparel.

Gwynnie Bee itself has operated fairly quietly, too, despite raising over $100 million in outside capital. Its investors include only a little bit of traditional VC, along with individual investors from retail and finance, as well as specific VCs investing independently. The company is not in need of raising again soon, because CaaStle is a less cash-intensive business than Gwynnie Bee, the founder notes.

“We’re super well-funded and have a bunch of cash in the bank. We’ll figure out if we want to do a big expansion round in the next year, but no specific plans,” says Hunsicker.

CaaStle is open to any retailer today who wants to reach out through its website.