(It’s an obstacle course, in Roblox lingo, by the way.)

You see, I’m not the core demographic for Roblox, the massive gaming platform that now sees over 50 million kids playing every month. I’m a grown-up.

Roblox users tend to be young – ages 8 through 18 play the game, though the core demographic is really more 9 to 15.

For those unfamiliar, Roblox is a universe of user-generated 3D virtual worlds, where kids can engage in open-ended play. They customize their own characters, and then do things like run through obstacle courses, build the roller coaster of their dreams, pretend to be a superhero, ride a hot air balloon to a castle in the sky, go scuba diving, run a pizza parlor, and much more. 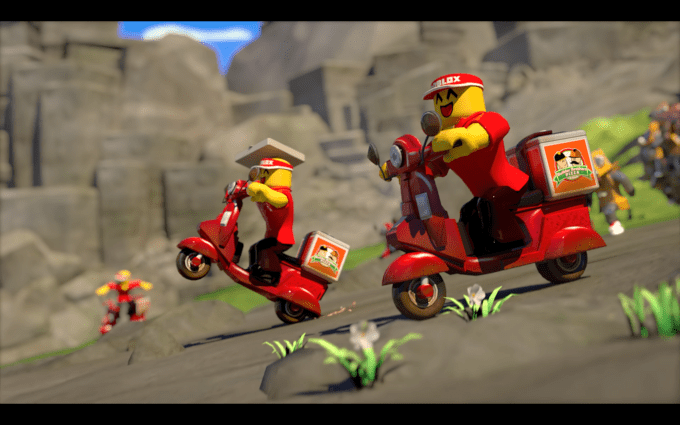 Kids can chat in the game, which is moderated both automatically to filter out bad words, as well as by human moderators. There are also “report abuse” features, and Roblox scans all user-gen content before it’s added to the platform.

But often, kids aren’t using in-game chat – they’ll call each other on FaceTime and play Roblox together. And sometimes record long YouTube videos of them just goofing around in the game.

Also of note, everything in Roblox has been built by other players, typically kids or young adults. That’s why the company of ten years only really began to take off a couple of years ago – when there was finally enough user-generated content to keep kids engaged.

Users often start off by playing Roblox in elementary school, then in middle school download Roblox Studio, the company’s creation engine, to build their own games and experiences. By high school, those who have learned to code start to customize their games even further. 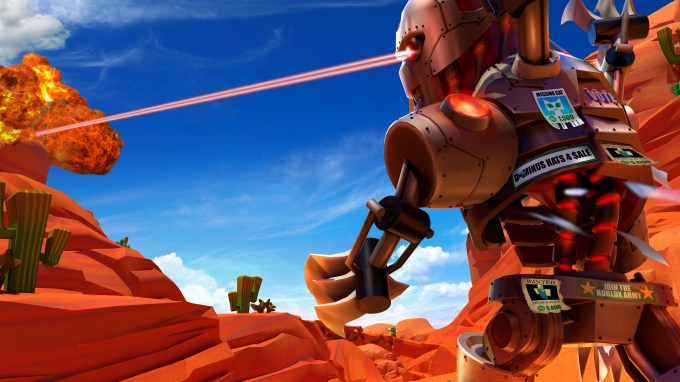 The games themselves are all free-to-play, with the creators instead charging for virtual items that kids can buy with virtual cash called Robux.

Roblox says it paid out more than $30 million to its creator community in 2017. (The company splits revenue from the games with creators, keeping about 30 percent after payment processing and hosting costs.)

“The top creators on the platform – which are typically high school kids – are making two to three million dollars a year,” notes Donato.

Roblox, in other words, is hitting its stride.

Today the company is announcing these metrics and others, along with news that it’s now cash-flow positive having generated hundreds of millions in 2017 billings, up 150 percent over last year. It’s now bringing on a CFO, Mike Guthrie, previously CFO at TruCar, to help it figure out its next steps. 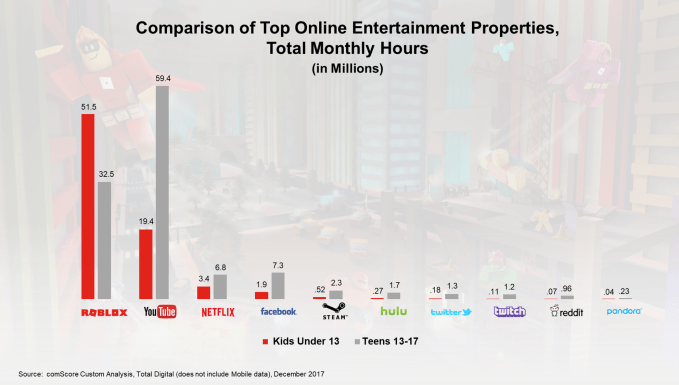 To determine its position in the state of the entertainment industry, Roblox had comScore compile data on how it compares to other online entertainment properties during the month of December 2017, and found that kids under 13 were spending more time in Roblox (51.5M hours) than on YouTube, Netflix or other social properties. And Roblox came into second place for teens, behind YouTube.

Roblox also saw more monthly visits during the month, for both kids and teens. 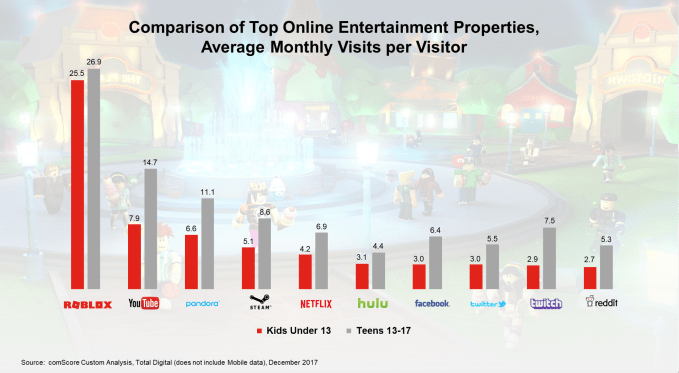 Around half Roblox usage is on mobile, with 40 percent on desktop and 10 percent on consoles.

“We’ve been around for about ten years, but the company started taking off about two years ago,” says Donato. (It was formally founded in 2006, and became COPPA compliant in 2007). “It just took awhile before we hit that mix of having a great amount of content. Obviously, the more players showed up, the more content was created, and that created a virtuous circle,” he added.

With its community now well-established in the U.S., Roblox is preparing to take its gaming platform international this year, by adding support for other languages besides English, and other currencies.

It will also expand its efforts with physical goods, where it today has action figures and has started to sell branded apparel. Roblox books based on the intellectual property created by its community will be released, with creators getting a split of these revenues, too.

However, physical goods aren’t a large part of Roblox revenues, nor is advertising, which only constitutes around 5 percent of revenue. Most of it comes from the user-gen content.

Roblox will soon go after more brand partnerships, as well, like one it did recently with Warner Bros. to promote the movie “Ready Player One” in-game. And it will double its 300-person team to 600 over the next year.

To date, Roblox has raised over $100 million in funding from Meritech, Index Ventures, First Round Capital, and Altos Ventures.