Oracle announced its quarterly earnings last night, detailing that its cloud business grew 32 percent to $1.6 billion in the quarter. That might sound good at first blush, but it’s part of three straight quarters of reduced growth — a fact that had investors jittery over night. It didn’t get better throughout the day today with Oracle’s stock plunging over 9 percent as of this writing.

When you consider that enterprise business is shifting rapidly to the cloud, and that the cloud business in general is growing quickly, Oracle’s cloud numbers could be reason for concern. While it’s hard to nail down what “cloud” means when it comes to technology companies’ earnings because it varies so much in how each one counts infrastructure, software, or platform; the general trend from Oracle seems contrary to the eye-popping growth numbers we have seen from other companies. 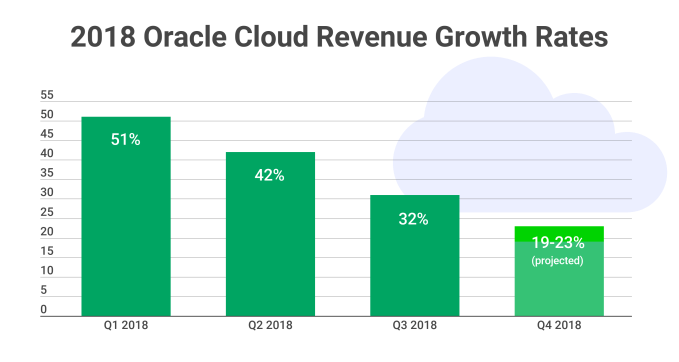 Oracle against the world

Oracle’s cloud revenue broke down as follows: SaaS, up 33 percent to $1.2 billion, and platform and infrastructure revenue combined up 28 percent to $415 million. To put those figures into context, consider that last quarter Alibaba reported overall cloud revenue of $533 million,which was up a whopping 104 percent year over year.

Looking purely at Infrastructure services, Canalys reported that in the third quarter of 2017, Microsoft grew at around 90 percent year over year, while Google grew around 75 percent YoY. Even market leader Amazon, which controls over 30 percent of the market, had around a 40 percent growth rate, fairly remarkable given its size.

All of that suggests that Oracle, which came to the cloud late, should be on a higher growth trajectory than it’s currently showing.That’s because it’s generally easier to grow from a small number than it is from a big number to bigger number (as Amazon has had to do).

The company’s on-prem software revenue continues to grow (which includes lucrative license and maintenance revenue from existing customers), and still accounts for the vast majority of its top line. However, at this point, you would think Oracle would want to see that revenue growth shifting away from on-prem and towards its cloud business.

What’s worse is that co-CEO Safra Catz predicted in the earnings call with analysts that the cloud growth could dive even further next quarter. “Cloud revenues including SaaS, PaaS and IaaS [all cloud business combined] are expected to grow 19% to 23% in USD, 17% to 21% in constant currency,” she told analysts this week. 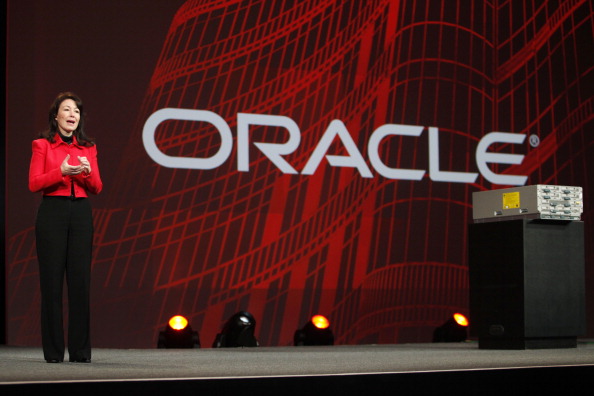 Looking for a brighter future

Chairman Larry Ellison tried to point to the fully automated cloud database product announced at Oracle OpenWorld last fall as a proof point of a brighter cloud future, but so far the numbers are not bearing that out. It’s worth noting that he did also indicate that more automated cloud products are on the way.

Oracle has spent the last several years putting a lot of cloud pieces together, and as Catz pointed out, they don’t have to invest further to handle additional capacity in their SaaS business, but with the numbers heading in the wrong direction that may not be the problem.

Oracle certainly has enterprise credibility, and that should bode well for its cloud business, but as a late comer to the market we should be seeing much brisker overall growth than this. Over time that may happen, but for now Wall Street was not happy with Oracle’s results and the firm probably has to show more from its cloud products before they can change investors’ minds.