AWS’s domination of the Infrastructure as a Service market continues unabated this quarter. Yes, Microsoft, Google, Alibaba and others continue to grow much faster than AWS, but that has not had a significant impact on AWS’s command over the IaaS market.

For starters, AWS had a monster quarter posting $4.57 billion in revenue. That was higher than the $4.51 billion that was expected by analysts and put Amazon’s cloud computing arm on an $18 billion run rate, as its steady upward growth trajectory continues. 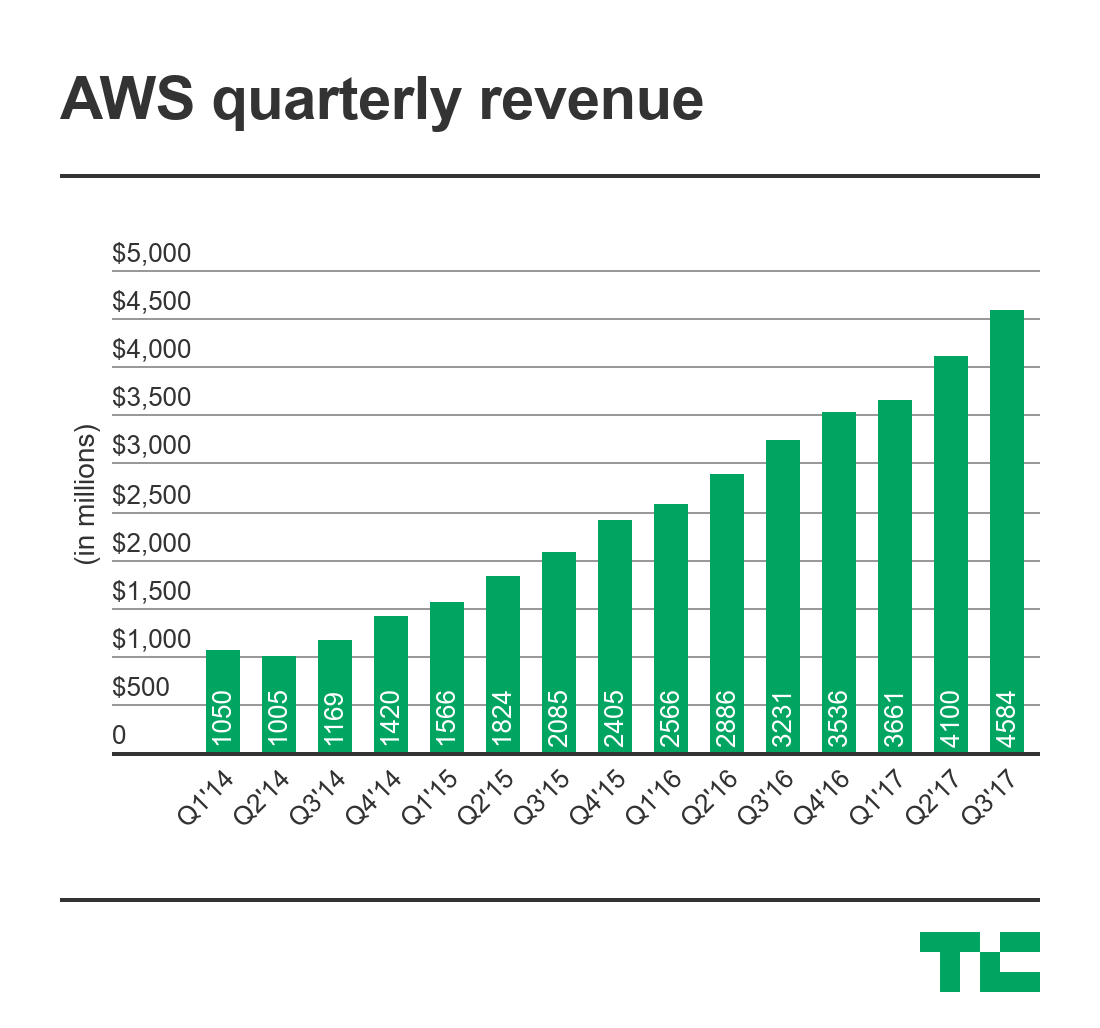 But I hear you saying, “Didn’t Microsoft post a $20 billion run rate?” Well, yes it did, but you have to do reasonable comparisons when it comes to that number, and Microsoft earned the majority of that substantial sum of money from its SaaS business — Office 365 — not from Azure, its infrastructure as a service platform (for a low down on cloud computing terminology, check out this article.)

John Dinsdale from Synergy Research, an analyst firm that tracks cloud market share across the different types, says you have to be careful to separate out that SaaS business when measuring market share. His company found that AWS continues to control 35 percent of the market and that its challengers continue to trail far behind when it comes to infrastructure, which they define to include infrastructure, platform and hosted private cloud services.

“This stream of research is focused on cloud infrastructure services (or cloud computing), so it covers IaaS, PaaS and hosted private cloud services. It does not cover SaaS (we do that in a different set of numbers).The majority of what is included in Microsoft’s cloud numbers is software/SaaS. Microsoft is the leader in the SaaS market by a big margin,” Dinsdale told TechCrunch, but it trails dramatically when it comes infrastructure. The other thing that tends to confuse people is the eye-popping growth rates of these competing firms. While these companies are growing at huge rates, with Canalys reporting that AWS is growing at around 40 percent, Microsoft growing at 90 percent and Google at around 75 percent. As always, it’s worth pointing out that it’s much easier to grow from a smaller market share number than it is as you get bigger, making the AWS number all that more impressive. There’s unquestionably plenty of room left in the market for everyone to grow as the pie expands over the next decade and more workloads get pushed to the cloud. But as the first company to market AWS has a distinct advantage, even as Microsoft pushes from behind.

“AWS will continue to benefit from its first-mover advantage, broadest cloud services portfolio and strong awareness among developers. But Microsoft’s substantial growth, driven by its huge enterprise installed base, compatibility with its Office portfolio and enhanced hybrid cloud solutions, means it will remain AWS’ closest competitor,” Liu said in a statement.

While AWS clearly recognizes the advantage of that head start, CEO Andy Jassy, said in an interview earlier this year, that he sees that the competition is coming fast.

“There won’t be just one successful player. There won’t be 30 because scale really matters here in regards to cost structure, as well as the breadth of services, but there are going to be multiple successful players, and who those are I think is still to be written. But I would expect several of the older guard players to have businesses here as they have large installed enterprise customer bases and a large sales force and things of that sort,” he said.

Regardless, it’s important to understand what you are looking at when you see cloud marketshare numbers and to understand that growth rates and revenue are not always the most accurate way to compare these companies. AWS rules the market, and for now nobody else is even close.