Google Search is now available within iMessage. In an effort to more deeply integrate Google’s search engine on iOS devices, the company announced today that its Search app for iOS has added an iMessage extension, allowing iPhone and iPad users to search the web, then quickly add those search results to their iMessage conversations.

The extension itself is clearly inspired by Google’s experiments with Gboard, Google’s own third-party keyboard app for iOS devices, and comes at a time when the popularity of alternative iOS keyboards seems to be declining. Nuance, for example, just shut down its Swype keyboard app; and Swiftkey had exited to Microsoft a couple of years ago.

With Google’s iMessage extension, users can type a query in the search box, or tap a button below for a specific type of search – like Weather, Food, Nearby (venues/businesses), Trending (news), or Videos – all very similar to Gboard. 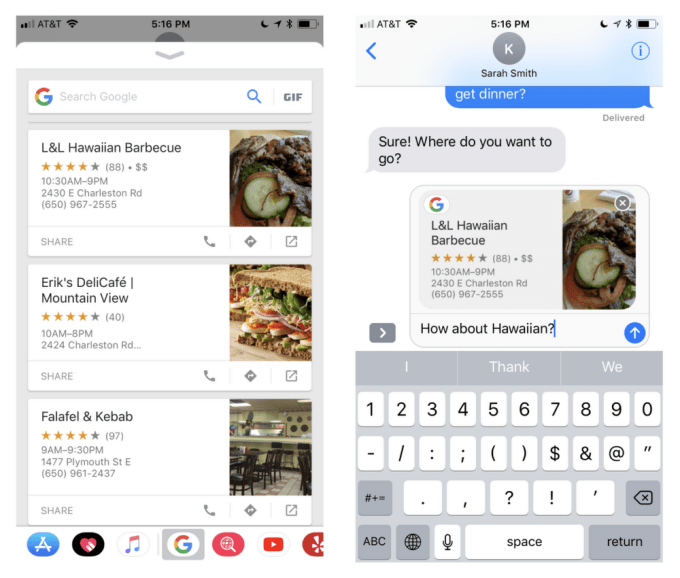 Google highlights restaurant search in particular in its announcement, as deciding where to eat is a common theme in iMessage chats. Tapping “Nearby” can help quickly pull up business listings or points of interest near your current location, which is also useful when communicating about a particular location.

Each search result includes a “Share” button that, when tapped, adds the item directly into an iMessage conversation as card. When the recipient taps on the card, they’ll go to the Google search result.

In addition, Google’s iMessage app offers a GIF search engine. This is available by tapping on the “GIF” button to the right of the search box, which will immediately load a selection of GIFs from sites like Giphy and Tenor, which you can then filter further by performing a search.

Making Gboard’s features available via an iMessage extension makes sense because not everyone wants to swap out their default keyboard on their iOS device.

It also give Google another way to reach users on iOS, even when they’re not in Google’s app itself. This is important because Google’s traffic acquisition costs have been climbing due to the shift to mobile devices, where apps and assistants like Siri serve up many of the answers users once turned to Google for, when on desktop. It also has to pay Apple billions to be the default search engine on iOS.

The app, like other iMessage extensions, is available by tapping the iMessage apps drawer in iMessage, then scrolling over to the Google app icon. (If you have a lot of iMessage apps already installed, it may be tucked away under “More.”)

The iMessage extension is one of three new features Google announced today for iOS users. However, it has actually been available in the Google app since February 7, 2018, according to Sensor Tower, indicating more of a soft launch.

Google also added two other features that integrate its search engine into iOS in new ways. One is a new share sheet option – now, when you share a webpage from Safari with Google, it will also show you suggestions for related content. A similar feature launched last year in the Google Search app, but is annoying as it pops up over the content when you reach the bottom of the page. With the new Share with Google functionality, it makes a bit more sense as the idea is that you could move from a webpage in Safari directly into a set of Google search results on the topic/

Also new is support for drag and drop on iPad. You can use the feature to move text, images, and links to and from the Google app, share articles from Google into iMessage, or save them into Notes for later reading.

All features are available today, but the iMessage extension is currently U.S.-only, Google says.