Twitch’s new reality show featuring up-and-coming streamers will premiere on March 8, the company announced this morning, along with the list of the fourteen personalities selected to participate. The video stars will be competing over an 11-week period for the chance to win $60,000, paid out as $5,000-per-month installments, meant to help fund their streaming careers.

“Stream On,”as the show is called, was first announced back in December, where Twitch explained the idea behind the series was to showcase Twitch Partners who were on the cusp of breaking out, but could benefit from additional exposure.

That is, the show won’t feature those whose fan bases are still small, or who are somewhat inexperienced with streaming; but it also won’t feature creators who are already well-known. 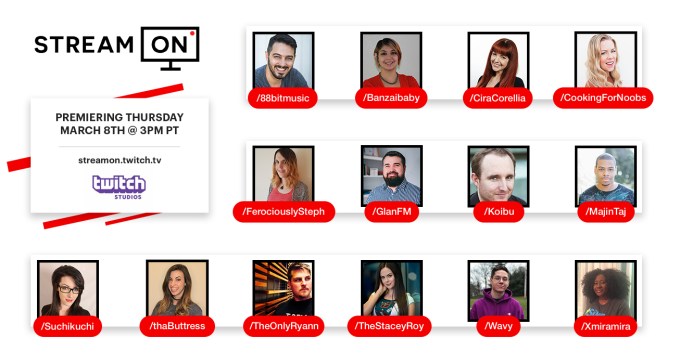 Some are known also for their creative talents beyond gaming – like cooking, music, or art – areas that Twitch has expanded into over the years, as with the launch of its Creative channel in fall 2015.

The show itself will be produced in-house by Twitch Studios, which is also responsible for other Twitch community content, including “Twitch Weekly;” a sneaker culture-focused show “FreshStock;” the mini-documentary “Ironsights;” and Twitch’s convention stage coverage.

While Twitch Studios has handled production for some competitive gaming events on stages at various events like PAX and TwitchCon, it hasn’t yet produced any live show of this size and scope in the past.

Throughout the 11-week period when “Stream On” airs live on Twitch, the creators will have their streamer skills tested. For example, they’ll be presented challenges like getting their viewers to respond to calls-to-action, while having their performances analyzed by judges.

Viewers are meant to interact in real-time by watching, cheering and participating in challenges. They will also vote to save creators from elimination using a custom-built extension overlay on the channel page.

As you may have guessed, the show isn’t just meant to be something fun to watch – it has a larger purpose for Twitch.

Not only will it help raise the visibility of various performers who will then, in turn, attract more viewers to Twitch’s platform, it will also serve as an educational experience for those streamers who want to learn how to make it big.

“Our mission at Twitch is to enable creators to make a living doing what they love,” said Marcus “djWHEAT” Graham, Director of Twitch Studios, in a statement about the show’s upcoming premiere. “With ‘Stream On’ our goal is to help not just these 14 streamers, but show the thousands at home how to turn their passions into a career.”

Twitch isn’t the only creator-focused streaming site to invest funds meant to fuel the next round of talent. YouTube does this as well, most recently with its announcement last month of a $5 million investment in positive content, and hundreds of millions into original productions for YouTube Red. Meanwhile, Musical.ly in December announced a $50 million creator fund, following its acquisition by Chinese social media giant Toutiao, owned by Bytedance.

Twitch also today announced a partnership with the 1,000 Dreams Fund which will dole out grants ranging from $500 to $2,000 to four or more female Twitch creators in 2018.

Twitch’s “Stream On” will air every Thursday at the same time (3:00 PM), after its March 8 premiere.