Scammers have taken to Zelle, the Venmo alternative backed by U.S. banks, to defraud consumers who believe the service includes the same protections they’ve come to expect from PayPal. A number of customers report having lost hundreds, or even thousands of dollars, over Zelle, when they used it for transactions with people they didn’t know – like tickets bought off a Craigslist posting, for example.

Here’s how the scam works. The seller will ask the buyer to pay them through Zelle instead of PayPal – the latter which has long been the standard for these sorts of anonymous transactions.

In many cases, the buyer isn’t aware of Zelle, but they do a little googling to read up on it. They discover it’s a digital payments service that’s backed by their bank, which makes them feel more comfortable. Zelle is also found in some banks’ mobile applications themselves, which adds to that sense of trust.

The buyer, now feeling that Zelle is a legit service, then transfers the money, assuming their bank will step in to help if anything goes wrong. After all, they’re sending money directly to another bank account – so surely the seller knows they could be tracked down and caught if they attempt fraud?!

Unfortunately, that’s not proving to be the case.

The seller – actually a scammer – will keep the money, then shut down their bank account, and disappear. The tickets, or whatever else they were purportedly selling, never arrive. In other cases, the scammer may not even need to go to that extreme because the victim’s bank just tells their customer there’s nothing they can do, since the customer had authorized the Zelle transaction.

As one victim told TechCrunch, the only thing their bank did was call the seller’s bank to follow up on the matter, and then the victim’s bank sent a letter stating that they would not help.

When the victim tweeted to Zelle Support to help in desperation, Zelle only responded by sharing a link that explains why Zelle should only be used with family and friends.

If you scroll down Zelle’s Twitter timeline, you’ll see a number of responses like that to similar inquiries. 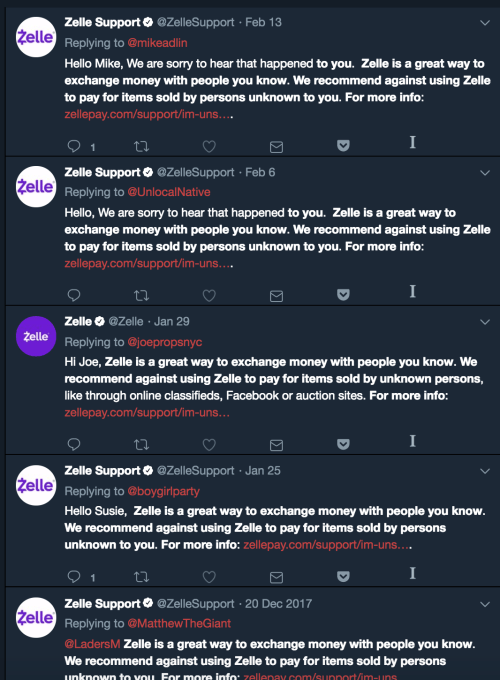 Another victim of this scam recently posted about his experience on Reddit to warn others.

After negotiating on the price for some concert tickets, he suggested to the buyer that he could send his payment electronically as the seller was outside of town. (The scammer was very good at social engineering too, if you read the whole story.)

“I transferred him money through Zelle. I used Wells Fargo, he used Bank of America. He gave me his name, email address and phone number. He said this was the service he was most comfortable with. Since I had used it before – and he gave me all the details – I wasn’t that concerned with it. The transfer went through. He called me about 5 minutes later to confirm he received the money and said he was logging into Ticketmaster, and I’d have the tickets in the next 5 minutes….. I didn’t receive them and called him back, he answered right away and said he had initiated the transfer and it might just take a few minutes.”

Of course, then the scammer disappeared. His phone was turned off; he never responded to any emails. He was gone.

We spoke to the victim to find out how the issue was handled by his bank.

“My bank, Wells Fargo, as well as the other bank using the Zelle system, Bank of America, were not able or willing to do anything after I was scammed,” the victim (who prefered to remain anonymous), told us. “I submitted complaints with the [Consumer Financial Protection Bureau] and eventually received a ‘courtesy’ refund from Wells Fargo,” he said.

A third victim told us she was defrauded $2,000 through one of these scams after trying to buy event tickets on Craigslist.

Again, the seller asked the victim to use Zelle.

She’s since filed a ticket with the Internet Crime Complaint Center, but doesn’t believe anything will come of it.

Another victim, a USAA customer, published a warning about Zelle to the bank’s community forums site after being defrauded – again, while trying to purchase concert tickets from a seller.

“I was hesitant but noticed it was available through USAA, so I figured it must be a trusted app and that USAA would stand behind anything that is available right there in their USAA app! Right after I sent my payment, the seller stopped responding to me and would not answer any phone calls or texts, and never transferred the tickets to me on Ticketmaster like was promised.”

As of the time of posting, USAA has not helped the victim get their money back.

These are not isolated incidents. The banks are doing nothing to help victims of Zelle scams and seem to have no legal obligation to do so. Instead, they’re saying because the buyer “authorized the transaction,” there’s nothing they can do to help recoup the stolen money.

What consumers don’t realize is that Zelle is actually more like Venmo than PayPal – meaning it’s only meant to be used for peer-to-peer digital payments with people you trust, like friends and family. Just like Venmo, Zelle does not offer fraud protection for buyers or sellers on its transactions.

Scammers know people aren’t aware of this, because Zelle is brand-new. They also know that people will choose to trust Zelle because it’s backed by their bank, and because it’s a feature within their bank’s own app.

What’s worse is that Zelle is not making an effort to spell out how it’s different from PayPal on its website.

While this information is disclosed in Zelle’s FAQ, it’s not one of the “featured” FAQ’s on Zelle’s homepage, where it would be more noticeable. 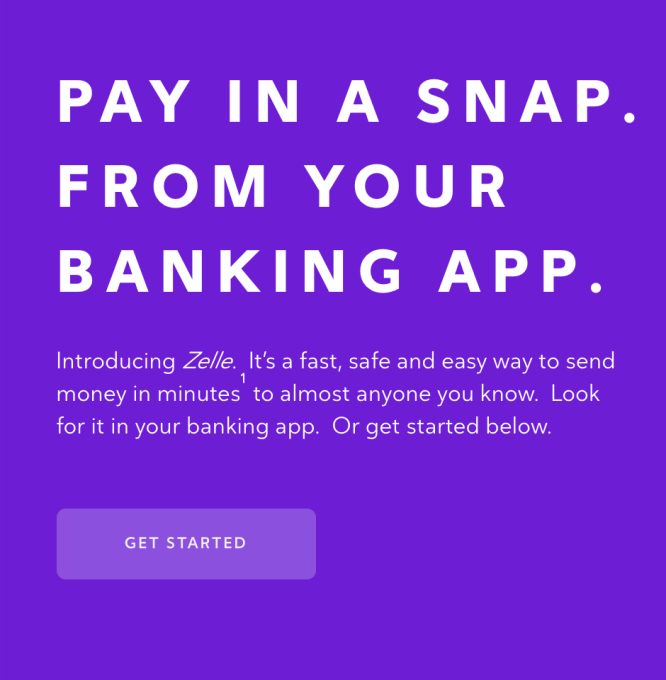 The Zelle homepage does not at all make it clear that this is a payments service for family and friends only – it only says you can use Zelle to send money to “almost anyone you know” – language that reads more like marketing speak than a strict warning that you should, well, actually know them.

Venmo, by comparison, specifically uses the wording “friends and family” when explaining its service.

Reached for comment, Zelle simply stated that it’s not meant for these sorts of transactions between buyers and sellers.

“Consumers should not use Zelle for transacting with people they do not know and/or aren’t sure they will get what they paid for – for example, items bought from an online bidding or sales site,” a spokesperson said. “Zelle is not responsible for goods or services that are not received or are received but do not meet expectations.”

That’s good information to know, but it’s coming too late for many of Zelle’s early adopters. And as word gets around that Zelle and the banks are not helping people who were scammed, it will ultimately damage Zelle’s reputation and send users back to PayPal, where buyer protections exist.