With Zenedge, Oracle gets a security service to add it to its growing cloud play. In this case, the company has products to protect customers whether in the cloud, on-prem or across hybrid environments.

The company offers a range of services from web application firewalls to distributed denial of service (DDoS) attack mitigation, bot management, API management and malware prevention. In addition, they operate a Security Operations Center (SOC) to help customers monitor their infrastructure against attack. Their software and the SOC help keep watch on over 800,000 websites and networks across the world, according to information supplied by Oracle.

Oracle says it will continue to build out Zenedge’s product offerings. “Oracle plans to continue investing in Zenedge and Oracle’s cloud infrastructure services. We expect this will include more functionality and capabilities at a quicker pace,” Oracle wrote in an FAQ on the deal (.pdf) published on their website. 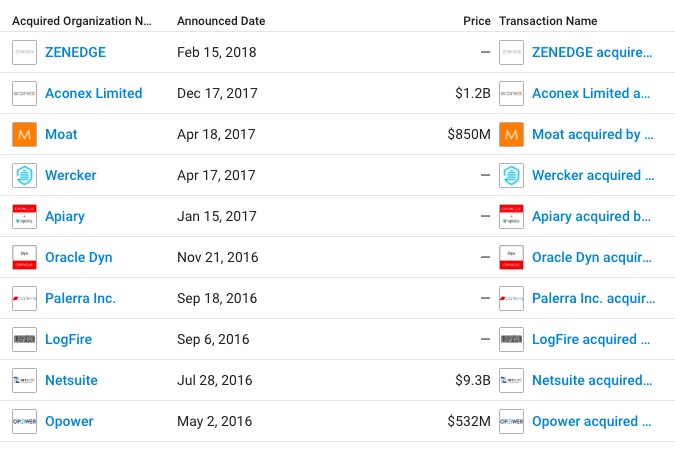 Just this week Oracle announced that it was expanding its automation capabilities on its Platform as a Service offerings from databases to a range of areas including security. Ray Wang, founder and principal analyst at Constellation Research says the company is a good match as it also uses automation and artificial intelligence in its solution.

“Oracle is beefing up its security offerings in the cloud. They have one of the strongest cyber security platforms,” Wang told TechCrunch. “They also have a ton of automation that fits Oracle’s theme of autonomous,” he added.

Oracle is far behind cloud rivals as it came late to the game. Just this week, the company announced plans to build a dozen data centers around the world over the next two years. They are combining an aggressive acquisition strategy and rapid data center expansion in an effort to catch up with competitors like AWS, Microsoft and Google.

Zenedge launched in 2014 and has raised $13.7 million, a modest amount for a cloud-based security service. Oracle says customers and partners can continue to deal with Zenedge using their existing contacts.