Heptio holds a special place in the Kubernetes startup ecosystem. Its co-founders, Craig McLuckie and Joe Beda, are, after all, also two of the co-founders of the Kubernetes project (together with Brendan Burns), which launched inside of Google. Heptio also raised $8.5 million when it launched in 2016 (and another $25 million last year), but it was never quite clear what the company’s actual business plan looked like beyond offering training and professional services. That’s becoming quite a bit clearer now, though, as the company today announced the launch of the Heptio Kubernetes Subscription.

I always assumed that Heptio would launch some kind of Kubernetes distribution in the near future — and that’s kind of what this is, but the company is also putting a different spin on this. Indeed, Heptio CEO McLuckie described the subscription service as an “un-distribution” when I talked to him earlier this week. The idea behind this concept is that enterprises do not want to lock themselves into a distribution — or a cloud, for that matter. Kubernetes and containers are what allows them to build multi-cloud solutions that avoid lock-in, but a distribution tends to make them dependent on a single vendor.

Enterprises are also going through an interesting cognitive shift, says McLuckie, because just like Google realized that its container technology would get better from open sourcing it, enterprises are now realizing that if they hire thousands of developers, it makes sense for them to be more connected to the technology that they are betting their businesses on — and the best way to do that is to be active in open source. That’s why Intuit, for example, recently acquired Applatix, the company behind the Argo workflow engine for Kubernetes.

McLuckie argues that this is creating a bit of tension because distributions tend to be about taking open-source technologies and making them enterprise-ready (and maybe adding some proprietary code on top of that) — because the community typically wouldn’t be able to do that. But now Google, Microsoft, Amazon and other cloud providers are putting in this work, so a distribution vendor becomes less of a necessity. 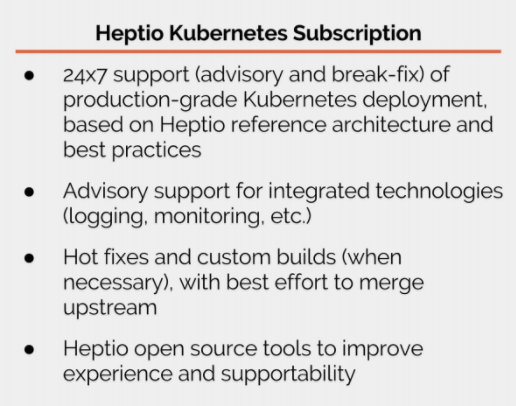 Add on top of that the fact that it usually takes some distribution vendors quite a while to offer the latest versions of a tool like Kubernetes (they have to integrate and test updates with their own proprietary code, after all) and the fact that you’re not just getting Kubernetes with the distribution but also a predefined set of other software for networking etc., and many enterprises would rather opt for a more flexible solution that also allows them to run their code on any platform.

And that’s where Heptio’s new offering comes it. It’s based on the company’s reference architecture and solely uses open-source tools (including Heptio’s own Sonobuoy, for example) and the latest version of Kubernetes, and that allows for deployments on any major cloud provider or on-premises. The company built a framework that handles the installation and then offers 24×7 support to its subscribers. Ideally, this means you get the best of a distribution (that is, a tested, enterprise-ready Kubernetes install, plus support) without any of the downsides. “Companies want a simple, modular installation framework,” McLuckie told me — and they want to be able to shift their consumption model as necessary.

With this, the company is focusing on organizations that have already decided on Kubernetes. Almost by default, these tend to be pretty sophisticated companies that want a multi-cloud solution based on Kubernetes, but they often need a bit of help in getting started with a product as complex as this.

Heptio also promises to bring its own improvements to Kubernetes and the installation procedure to the community. Over time, that’ll mean that one of its major value propositions will go away, but McLuckie is quite aware of this. That’s why Heptio is already working on its next generation of products and services that bring additional value to its users. What these will look like, though, remains to be seen, but McLuckie promised that he’ll have more to share by the middle of the year.

As for pricing, McLuckie tells me that he doesn’t want to charge a per-node fee. “We sell it in ‘t-shirt sizes’ where the scaling factor is the size of the environment and the number of unique configurations — different hosting environments, network configurations, etc.,” he said. “Our goal is to simplify things for the enterprise buyer and make sure that we are delivering honest value. We do not believe, for example, that it is intrinsically more complicated to run a 100 node cluster production cluster than it is to run a 25 node cluster and our pricing reflects that reality.”