LG Mobile has posted just one quarter of profitability over the last two years, that was a small $3.2 million profit Q1 2017, the first quarter of sales of its G6 flagship. Previous to that, you have to go way back to Q1 2015 to find a positive quarter for its mobile division. 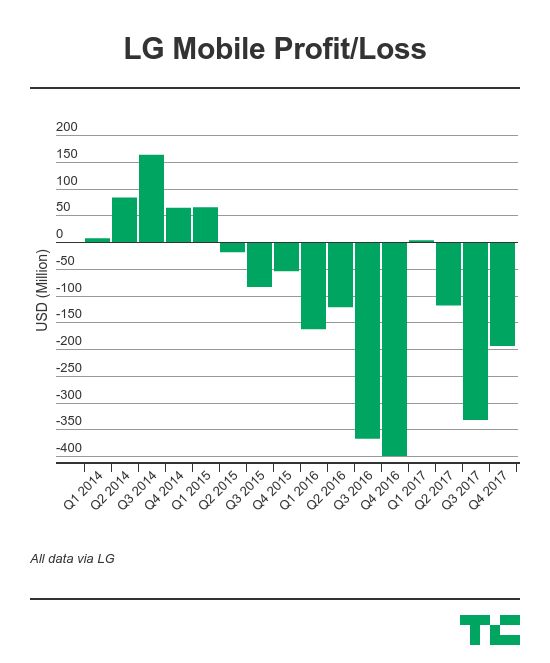 LG cited “a challenging marketplace and strong competition from Chinese brands” as primary factors behind its struggles over the past year. You’d imagine that Oppo, Vivo, Huawei and Xiaomi — which have mopped up marketshare across the Asian market with competitively-priced attractive mid-range devices — are the specific companies referenced here.

Looking at its own devices, LG said the LG V30 sold well alongside unnamed premium smartphones.

Onward to this year, Mobile World Congress is next month and it’ll give us a glimpse at what devices and tricks newly appointed LG Mobile CEO Hwang Jeong-hwan — who spent time in its R&D division — is pinning a revival on.

Outside of mobile, the story is different: LG as a whole is prospering.

Its full-year profit of KRW 2.47 trillion ($2.23 billion) is the most it has made annually since 2009. That’s principally down to its home appliance and TV divisions, with LG’s home entertainment division seeing its operating income for Q4 rocket by 134 percent to hit KRW 383.5 billion, around $345.96 million.

The success of its other units does make you wonder how much longer LG will tolerate its loss-making smartphone business. There’s plenty of precedent to trimming the focus or removing it altogether. Sony’s decision to reduce its mobile efforts in recent years removed what were once big losses for its business, while HTC — which doesn’t have other profitable units to fall back on — was forced into selling a large chunk of its smartphone business to Google to stay afloat.