Korea electronics giant LG continues to show the world that making a profit, or even breaking even, from selling smartphones is no easy thing.

LG Mobile has posted just one quarter of profitability over the last two years, that was six months ago during the first quarter of sales of its new flagship, the LG G6, when it eked out a $3.2 million profit. Previous to that, you have to go way back to Q1 2015 for a quarterly profit.

LG will tout the fact that with 13.7 million shipments, its smartphone numbers were down only slightly on 13.9 million at the same time last year. It claimed shipments grew quarter-on-quarter by 44 percent in Korea and nine percent in the US, but its business has taken several steps back since it shipped 59 million devices in 2014. 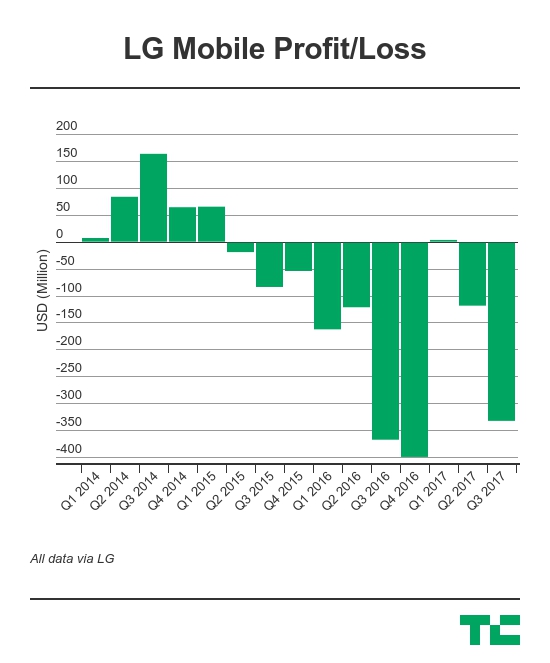 The company is still making decent devices — its newest flagship is the LG G6 which sports a unique 2:1 aspect ratio display and first to latch on to the trend of tall-screened smartphones — but nice doesn’t cut it.

It was sad — but fairly expected — that last quarter, the first full three-month period for the G6, LG warned that the phone wasn’t selling as well as it had expected.

Ok, the high-end is tough. LG has traditionally done well on the mid-range, where it offers affordable smartphones that provide good ‘bang for buck’. But, with Chinese OEMs flooding markets across Asia and beyond with more stardust sprinkled on their devices, LG is falling short just like other Android makers. (Ask India’s OEMs, which have been wiped out of the country’s top seller list, for more about that.)

LG is far from alone, but it has been the slowest of the once-huge phone makers to react.

Sony massively scaled down its smartphone unit in recent years to stop the bleed — which had dragged down the company’s overall financial results — while HTC, once a smartphone darling, took an unorthodox $1.1 billion investment from Google in September to effectively bail it out of financial trouble for a while longer. Even Samsung, second to Apple, makes more from component sales than its (popular) smartphone business.

All isn’t a disaster because like the others, and unlike HTC, LG has other verticals to fall back on and prop its overall earnings up.

In this recent Q2, for example, LG’s overall net income came to $456 million with revenue up 15 percent. All four of the firm’s business units — home appliance and air, home entertainment, automotive, and that loss-making mobile division — posted annual revenue gains and post were significantly profitable.

The automotive division did card a $25 million loss but that was down to R&D investment — clearly essential for growth in this nascent and promising space. The same can’t be said of smartphones in 2017. LG needs to seriously reconsider its mobile strategy after years of failure.