Instagram now lets users slap background-less GIFs sourced from Giphy onto their Instagram Stories. Rolling out with a partnership with Giphy, the new GIF sticker engine could further differentiate Instagram Stories from Snapchat, which has yet to embrace the animation GIF trend.

Giphy worked with Instagram to create a special search engine for a library of GIFs designed to be overlaid over photos and videos rather than being shared by themselves. The backgrounds and transparent bits of these GIFs have been cut out so they mesh into your imagery.

[Update 1/23/18: Instagram confirmed our scoop today, officially launching GIF stickers with Giphy six days after we originally reported on January 17th that the feature was coming. You can see what’s trending on Giphy or search through hundreds of thousands of overlay-optimized GIFs. Also, in the next few weeks Instagram will start allowing uploads of square and landscape photos and videos to Stories beyond its default portrait orientation. Rather than cutting off the edges or zooming in, Instagram will fill the edges with a custom frosted glass-style color gradient based on the colors of your image. We’ve updated this story to reflect the launch.] 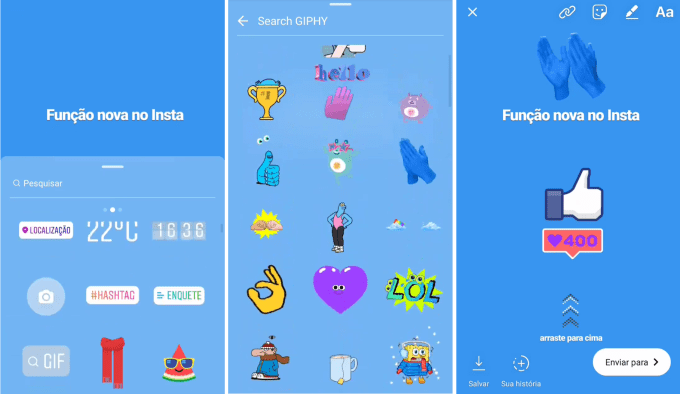 Facebook and Giphy have been working more closely recently on custom GIF databases, as the two built a child-safe, hand-picked set of animations to offer in the new Messenger Kids app for users younger than 13 years old. Previously, Giphy helped Facebook launch a GIF comment button.

Instagram’s initial tests of GIF sharing were first reported by The Next Web in November, but details were scarce and the product didn’t have a “Giphy” logo in the search bar. Now users all over the world are getting access after the feature was tested in Brazil and the Philippines. The screenshots above come from Brazilian social media consultant Mika Mota.

Instagram was abnormally cagey about discussing the feature when we asked on January 17th, which we now know was because a partnered announcement with Giphy was looming. After an initial “no comment” though, an Instagram spokesperson told me “we’re always testing new experiences for the Instagram community.” Giphy didn’t respond to a request for comment before press time. But now you can read the full details here.

Meanwhile, the ability to upload photos and videos of any size could give Stories even more flexibility for documenting your life. You don’t have to live in Instagram’s Stories camera, and can instead use your phone’s default camera in any orientation without worrying about losing the edges. It’s another reason people might fall back to Instagram instead of using Snapchat Stories.

Instagram has become a hub for home-made animation sharing thanks to its popular Boomerang feature that started as a standalone app before getting baked into Stories. Recently, Instagram added some savvy stabilization, which makes your back-and-forth image loops much less shaky. And Facebook has tested its own Boomerang-style GIF creation button.

But now Instagram is opening up to outside GIF engines to expand its sticker library. Instagram already offers a few props like sunglasses and mustaches, seasonal imagery, standard emoji, location and weather overlays, time stamps, selfie stickers and augmented reality face masks. If it wants Stories to stay interesting, though, it has to keep equipping users with new ways to jazz up their posts. Working with a third-party like Giphy that in turn aggregates content from user submissions delivers an endless parade of adornments to Instagram Stories.

While Snapchat offers animated filters, augmented reality World Lenses, and Bitmoji, it still doesn’t offer a GIF or Boomerang-like sharing experience for Stories. You might say that keeps its Stories authentic, but for kids around the world sitting in their unexciting bedrooms, it might leave what they share looking a bit boring.

Snapchat recently added its own animated stickers, but they come as pretty limited rotating sets rather than a big, third-party powered library. Back in April we wrote that Snapchat’s anti-developer attitude was limiting its potential. By December, it finally relaxed its iron grip over the experience by starting to let developers build their own AR filters, though Snap won’t help promote them unless they pay.

Facebook’s decade-old platform and culture of working with outside developers could help keep its products fresh at a time when it’s desperate to encourage sharing. The company announced a retreat from public publisher content in the News Feed in hopes of promoting well-being through active interaction between friends instead of passive consumption. One way to fuel that drive is by giving people ways to creatively communicate visually without having to paint a masterpiece by themselves.