With the microchip processing industry facing perhaps its biggest security scare in its history, the CEO of one of the world’s biggest chipmakers, Brian Krzanich of Intel, took to the stage at a keynote at CES to say a few words about the news before launching into his planned announcements covering areas like automotive, AI and entertainment.

“I want to thank the industry for coming together to address the recent security, industry-wide issue. Security is job number one for Intel and our industry,” he said. “The primary focus for us has to keep our customer data safe.”

He said that Intel had not  received any information that any data has been compromised on its chips to date. “We are working tirelessly to make sure it stays that way,” he added.

He also said that Intel expects to issue updates to its processors soon. More than 90 percent will be getting them within the week, and the rest by the end of January.

He also added that the impact of the security patches will be “highly workflow dependent”, he said. “We will continue to work with industry to minimise the impact on workloads over time.”

Krzanich did not mention (unsurprisingly) anything about the stock sales he made in November, after he knew about the vulnerabilities on the chips but before the information was made public. The company has said that the sale was unrelated and part of a previously scheduled stock disposal, but some believe that the size of the stock sale could merit an SEC investigation.

(To illustrate the different industry players coming together to work on solving the chip security vulnerabilities, Intel posted this list of quotes related to Meltdown and Spectre:) 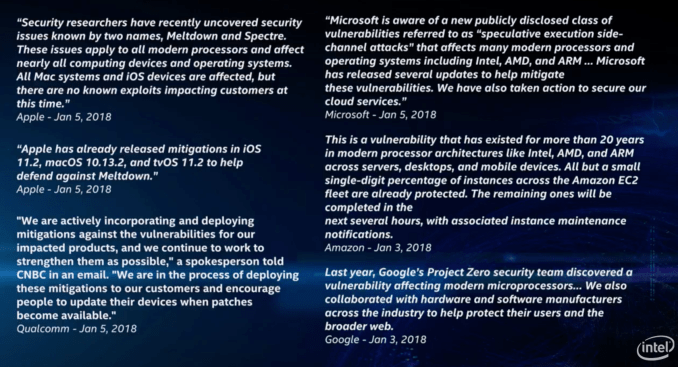 It’s a notable moment for Intel, which last year was momentarily eclipsed by Samsung as the world’s biggest chipmaker in terms of revenues.

Krzanich’s words represented a strong shift from the usually upbeat tone of Intel’s CES keynote speeches, one of the regular hallmarks of the weeklong event.

As with previous years, the company is continuing to focus on new lines of products and technologies, and specifically how Intel can be a more central player within them as part of its mission to continue evolving its chip business — the logic being, if Intel can be in the driver’s seat in how that new technology develops, it can leverage this for Intel’s chips to play a central role in powering them.

And “driver’s seat” may be the operative term here: it looks like that majority of Intel’s news for this year focused on new deals with carmakers as they move to test and adopt autonomous driving systems.

Intel is now putting 100 vehicles of its own into its own self-driving pilot — it looks like the first of these that it wheeled on to the stage is a Ford — and it said that 2 million vehicles from BMW, Nissan and Volkswagen are using Mobileye’s Road Experience Management (REM) tech to work on crowdsourcing data to enhance its maps: the companies are working with Intel and Here to build these maps into their systems.

Meanwhile, in China Intel will work with SAIC and Navinfo to develop Level 3, 4 and 5 cars (with increasing levels of autonomy), also using Mobileye technology, for the Chinese market.

Mobileye will be holding a separate press conference on Tuesday where it’s likely to go into more detail about its own self-driving platform, which was also touched on at the keynote.

Intel is also doubling down on artificial intelligence as another key new area for its chip business. In the world of sport — specifically motor racing (more cars!) — Ferrari North America will be using Intel’s Xeon processors and the neonTM framework to transcode, identify objects and events, and stream the experience to fans, and provide additional stats around that.

Entertainment is getting a significant leg up beyond the Ferrari partnership with the launch of Intel Studios, a new volumetric studio in Los Angeles, naming Paramount Pictures as its first partner.

Intel’s take on this will be focused on producing “large-scale, volumetric content” and “new forms of visual storytelling with and without VR.” In addition to its volumetric video stage there will also be a post- production facility.

The content play is not ending there. Last year Intel announced that it would be a tech partner for the 2018 Olympics, and today the company revealed a little more on what this will entail. It claims that the Olympics will be the largest scale VR event to date, with 30 Olympic events, with live and on-demand content. The live VR video, which will be made with NBC, will the first time that the Olympics have been broadcast in this way. The company also said that its FreeD (3D) tech will be rebranded as TrueView.

In another AI move, the company announced that a new chip it has been developing, Loihi, which “mimics the way brains observe, learn and understand,” is now functioning and will be making its way to research partners in 2018.

Quantum computing also got a shout-out, as Intel flagged that its new Tangle Lake 49-qubit quantum computing test chip is now being shared with research partner QuTech, another step in getting deployed and once again significantly speeding up processing power.